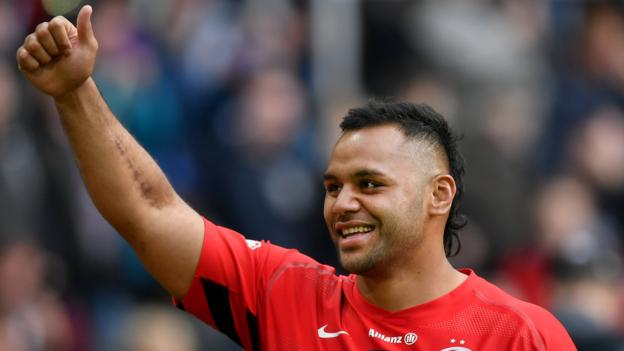 Saracens number eight Billy Vunipola thanked his team-mates after capping off a difficult month with the match-winning try in the Champions Cup final.

Vunipola left the field to boos after helping Saracens beat Leinster to win a third European title in four years.

The 26-year-old has been in the headlines after defending Israel Folau's social media post in which he said "hell awaits" gay people.

"There's a lot of love in that changing room," Vunipola told the BBC.

"I've felt that recently with everything that's been going on. The way we look after each other makes a massive difference.

"Today I want to make it about the team. It's not about me or what I stand for. It's about the badge I represent and the players I stand with and who stand with me."

Saracens director of rugby Mark McCall praised Vunipola for his contribution to the hard-fought 20-10 victory in Newcastle.

"It's obviously been a complicated five or six weeks, for him and for the squad," he said.

"But what we needed from him was to do his talking on the field, not off the field. He's been really good and his team-mates have supported him very well."

Vunipola left the field with a shoulder injury following his try, but later suggested it was nothing serious.

The England forward has a history of shoulder and arm injuries and said he may have hurt it as he barged past Leinster's defence to get over the tryline off the back of a scrum.

"If I didn't go for the try, I probably wouldn't have hurt my shoulder but those are the sacrifices you make for the team," he said.

"This is a big game for big players - and Billy Vunipola is one of the biggest in world rugby. He has the ability to make the difference at key moments. He's a Test-match animal. The type of player you want in your side. Who scores tries like that? You think of Lawrence Dallaglio against Wales with players hanging off his back. What a player!"

Saracens came from 10-0 down to beat holders and four-time champions Leinster and regain the trophy.

They became the first English side to win the tournament three times after beating Racing 92 21-9 in the 2016 final and defending their title with a 28-17 victory over Clermont the following season.

Mark McCall's side lost both their starting prop forwards to first-half injuries and were reduced to 14 men when Maro Itoje was given a yellow card for offside.

Leinster capitalised on the disruption as Tadhg Furlong barrelled over to give them a 10-point lead, but Saracens fought back and tries from Sean Maitland and Vunipola sealed the victory.

"When things got thrown at us it let us loose a bit," he told BBC Radio 5 Live. "From thereon in it got better and better.

"We focus on ourselves. We let everything that's going on around us make us better. This is a tight-knit group and that's what makes us good."

Saracens captain Brad Barritt, who was named man of the match, said: "We have spoken in the last few weeks about being a tough team. Leinster are an unbelievable team with few weaknesses.

"We wanted to throw the kitchen sink at them and not hold back. We soaked up pressure and responded."