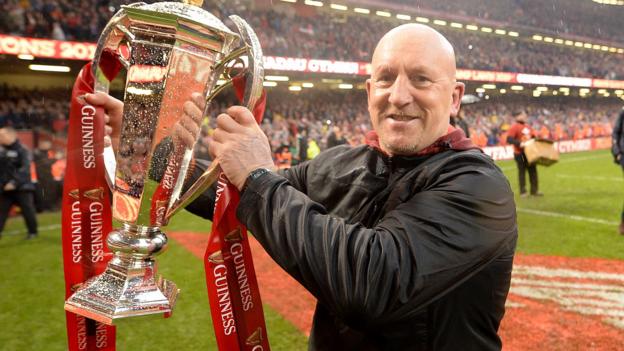 Wales' next coach Wayne Pivac has suggested defence coach Shaun Edwards' decision to leave after the World Cup was a financial one.

Edwards held talks about joining Pivac's new-look backroom staff but will leave the Welsh Rugby Union and is tipped to join up with France.

"We had some talks with Shaun and they were productive, but we did not quite get it over the line," said Pivac.

"It is an individual choice and probably a financial one."

Scarlets defence coach Byron Hayward is being tipped to be in Pivac's backroom staff with Stephen Jones and Jonathan Humphreys already confirmed.

Pivac said he would discuss the Wales coaching issue next week after his final game in charge of the Scarlets, who face the Ospreys for a Heineken European Champions Cup play-off place at the Liberty Stadium on Saturday.

Warren Gatland steps down after the World Cup in Japan when forwards coach Robin McBryde will join Leinster.

Pivac believes his new-look team can add some insight of its own.

"It happens," said Pivac. "Everyone has their tenure and they have had had a fantastic tenure.

"The last 18 months has been tremendous to watch with the growth of the team. That's the exciting part of going in now and seeing whether we can add value to that.

"It is not a case that intellectual property goes and the new one comes in.

"Within that intellectual property a group of players is a part of it so there will be a lot of information shared early.

"Making sure we are not going in there and rip things apart because it is not broken."