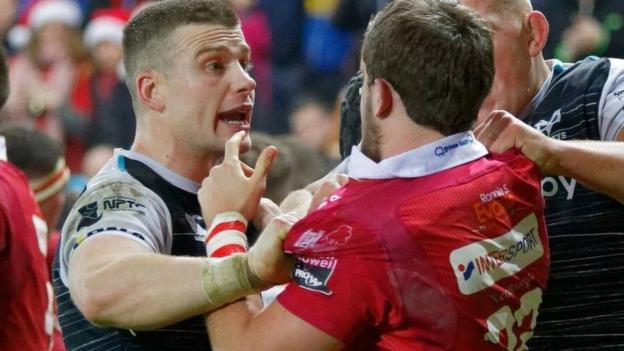 In March, Ospreys and Scarlets were on the brink of one of the unlikeliest mergers in Welsh sporting history.

On Saturday, at Liberty Stadium, those teams will fight it out to be the country's sole representatives next season in Europe's premier club competition, the Heineken European Champions Cup.

If things had been different, those sides - crammed with Wales Grand Slam winners like Alun Wyn Jones, Jonathan Davies, Ken Owens and Justin Tipuric - could have been lining up together next season.

Now fate means either Ospreys or Scarlets - not a combination - will be in Europe's elite tournament.

From proposed merger partners to European rivals in the space of just two months.

"You could not write this," was the reaction of Ospreys head coach Allen Clarke and Scarlets full-back Leigh Halfpenny when asked about switch from unlikely allies to familiar foes.

Rewind to March and regional rugby was struck to its core after it emerged Ospreys and Scarlets had held merger talks.

The proposal emerged amid the backdrop of financial problems in the domestic game and supporters were left stunned. The controversy also erupted in the middle of the Six Nations as Wales were chasing a Grand Slam and uncertainty thrived.

After claims and counter claims and the resignation of Ospreys chairman Mike James, the plan was shelved and the regions went back to being local rivals. Only in Welsh rugby!

"There was a fear of this place not existing as its own entity and the Ospreys," said Clarke.

"These boys [players] have been brought up knowing and playing for the Ospreys so if it's got me, you can only imagine how it's got those boys.

"There's a resoluteness about the people of this area. That honesty, fight and directness are real strengths and the Ospreys reflects that DNA."

The team responded with four bonus points victories, allowing them to finish fourth in Conference A and set up the home play-off tie.

"It tells you a lot about the character," said Clarke.

"As a region we have remained focused and become galvanised.

"It's like anything in life when you feel like you're close to the end of something that's special, maybe you knock off the shackles to a degree and embrace the opportunity."

In contrast, Scarlets' form stuttered and they finished the regular season with defeat by Dragons on Judgement Day at Principality Stadium.

They will be disappointed to finish fourth in their conference after winning the league two years ago and being beaten finalists last season.

Saturday marks Wayne Pivac's final match in charge before he replaces Warren Gatland as Wales coach after the World Cup in Japan later this year.

"It would be nice to go out with a win," said Pivac.

Scarlets have never failed to qualify for Europe's top tournament since regional rugby's inception in 2003.

Pivac does not want to leave Llanelli with that dubious honour on his otherwise impressive Scarlets record.

"We've spoken with the players. We have got a proud history in the top echelon of European rugby and that's where the club would like to be next season," he added.

While Pivac is departing, Ospreys fans hope they will not be watching Wales skipper Alun Wyn Jones play his last game for the region.

Jones is out of contract after the World Cup and is currently in talks over a new deal.

"He is a talisman of what we are about, along with other senior players," said Clarke.

"I hope he is here for the foreseeable future."

'Everyone wants to play in Champions Cup'

Star names from both teams know what is on the line before they head off with Wales to prepare for the World Cup in Japan.

"The Champions Cup is everything. It's where we want to be playing," said Halfpenny, one of only 11 Welshmen to win the tournament.

"As players you want to be there and to be testing yourself against the best teams in Europe. It's huge for the club as well as the fans."

Wales wing George North knows the Champions Cup is vital for his new region as he plays against his former Scarlets side.

"It's the creme de la creme of European rugby, everyone wants to play at the highest level," he said.

"That's the tournament we want to be in."