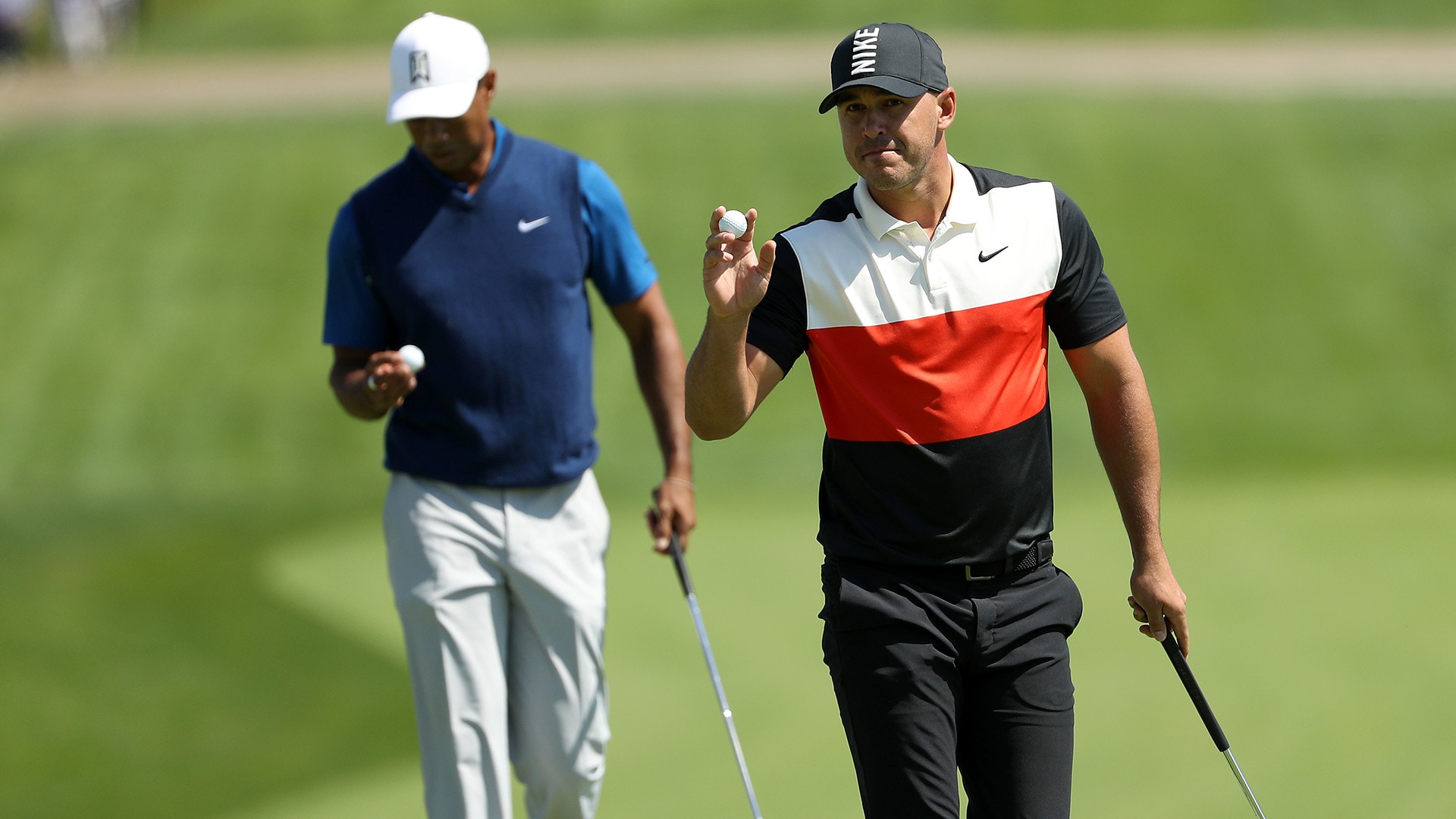 FARMINGDALE, N.Y. – Brooks Koepka delivered on the biggest stage again, this time with Tiger Woods at his side.

At times overlooked even after winning three majors in the last two years, Koepka gave thousands of fans a round to remember Thursday morning at brawny Bethpage Black with a record-setting start to his title defense in the PGA Championship.

He had a 7-under 63, making him the first player in 101 years of the PGA Championship to shoot that score twice. He broke the course record at Bethpage Black and became the first player to post 63 at a major in consecutive years.

''That was one of the best rounds I've played probably as a professional,'' Koepka said. ''This golf course is brutal.''

Danny Lee was nearly as impressive and made eight birdies in the afternoon, including the final two holes. He finished with a 64 to close the gap to one shot, exceeding his own expectations.

''My mindset was honestly some kind of under-par round would be good,'' Lee said. ''I did a lot better than that today.''

That wasn't the case for Woods, who had not played Bethpage Black since his nine-hole practice round Monday, and had not played a tournament since he won the Masters.

He opened with a pair of double bogeys on the back nine and ruined a torrid start to the front nine – two birdies and a 30-foot eagle in a four-hole stretch – with a pair of three-putt bogeys. That gave him a 72, leaving him nine shots behind and ending 12 consecutive rounds at par or better in the majors dating to the U.S. Open last summer.

Make no mistake: A gallery that trudged through muddied walkways to the 10th tee in the early morning was there primarily for Woods, who created a new era of Tigermania with his stirring comeback following four back surgeries to win a 15th major.

What they saw was a major performance.

Just not from him.

So special was Koepka's round, even on a course still soft from rain earlier in the week, that only 16 players broke par. He was 10 shots better than the average score in the opening round.

Tommy Fleetwood had a 67, while the group at 68 included Pat Perez, who played a practice round with Koepka on Tuesday. Jordan Spieth overcame a double bogey on the 10th hole for a 69 and was in a group that included Dustin Johnson, Phil Mickelson, Rickie Fowler and Jason Day.

''The course is not easy, but Brooks obviously made it look real easy,'' Perez said. ''I saw that on Tuesday when I played with him. I actually congratulated him on his win.''

But it's far from over, even before Lee made his afternoon move to cut into the lead. Fowler was bemused when asked how close he would have to be to Koepka heading into the final round Sunday.

''What makes you think he's going to be leading?'' Fowler said. ''I would say there's no lead really safe here.''

Woods is the only player to win back to back at the PGA Championship in stroke play – he did that twice – and Koepka had an ideal start in a bid to catch him. He won at Bellerive in steamy St. Louis last August by two shots over a hard-charging Woods. Koepka played in the group in front of Woods at Augusta National and finished one back.

This time they were together, along with British Open champion Francesco Molinari (72), and it was a one-man show.

''I think that was probably the highest score he could have shot today,'' Woods said.

''When that putt went in on No. 10, that was kind of the momentum that set me,'' Koepka said. ''But I never once thought about the course record or anything. I was just trying to shoot the best I could. Simple as that. Just keep going and total them up at the end.''

He is the ninth player to open a major with 63, and only two of them went on to win - Jack Nicklaus at Baltusrol in the 1980 U.S. Open, and Raymond Floyd at Southern Hills in the 1982 PGA Championship.

There is a long way to go. Considering Koepka's record in the majors - three wins and a runner-up in his last seven majors – this felt shorter. Koepka came seriously close to a bogey only one time, and he made a 10-foot par on the sixth hole.

Woods managed to get under par, but only briefly.

His opening tee shot took enough bounces to barely get into the rough, and it left him no option but to hack out. The mistake was a wedge that went over the back of the green, and Woods threw his head back knowing his mistake. His fast pitch went 6 feet by and he missed to open with a double bogey. His other double bogey came on the par-3 17th when he went into the face of a bunker, blasted out longer and took three to get down from there.

A birdie-birdie start to the front nine, and a 30-foot eagle putt on the par-5 fourth, brought him to 1 under. And then he bogeyed three of the next four holes.

''I fought my way back around there, and unfortunately, I just didn't keep it together at the end,'' he said.