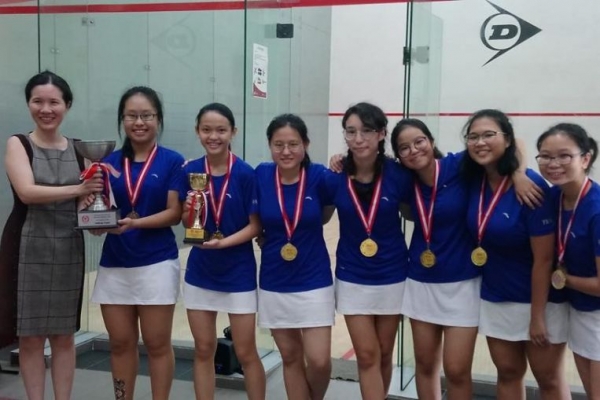 SINGAPORE - Throughout the Schools National B Division girls' squash final on Wednesday (April 3), a favourite cheer among the Singapore Chinese Girls' School (SCGS) supporters was how their fellow student Rachel Tan "takes no Ls".

The chant proved both catchy and prophetic as the 16-year-old never looked like losing as she easily beat Methodist Girls' School (MGS) captain Michelle Lai 11-3, 11-6, 11-5 to secure the gold medal for her team.

Hers was the fourth match which clinched the tie at the Kallang Squash Centre before teammate Waverly Wu defeated MGS' Gabrielle Chong 11-9, 11-3, 11-4 to complete the overall 4-1 scoreline.

Rachel, who is SCGS' vice-captain, pumped her fist and grinned at her supporters after winning her match. She ended the season with a perfect record from her eight matches.

"I was very happy because it's my last year in SCGS and I wanted to end it on a good note," she said. "I was nervous because it was the final, but I just told myself to do my best and forget everything else."

There was also added motivation for the SCGS team this year, as they were runners-up to the same opponents in the C Division competition two years ago.

And they begun strongly as SCGS captain Lim Yu Xuan and Hanaan Khaleel Hussein Abo Al Thinin both won their respective singles ties 3-0 to give the defending champions a 2-0 lead.

SCGS captain Yu Xuan, 16, acknowledged there was pressure to retain their title.

But she coped with those nerves by focusing on each point in the match instead of the raucous crowd, whose cheers after every point drowned out the voice of the marker announcing the score.

Her MGS counterpart Michelle, 15, rued her jittery start. She said: "I know I started off really badly, so I had to calm myself and think because my brain was like TV static... I gradually managed to calm myself down, but it wasn't in time."

This was MGS vice-captain Erin Chan's first B Division match this year after recovering from a torn elbow ligament and, while it ended with a loss, she was not disheartened.

The 15-year-old said: "I should be sad because it's our last year and I want to win, but I feel so proud after watching my teammates play and watching them each break their own mental barriers in squash.

"It's the friendship that will last... If I look back on this year, I wouldn't really care that I won or lost, I would care more that my team and I had so much fun together."

More in this category: Superstars clash in PSA World Tour Finals in Cairo »
back to top