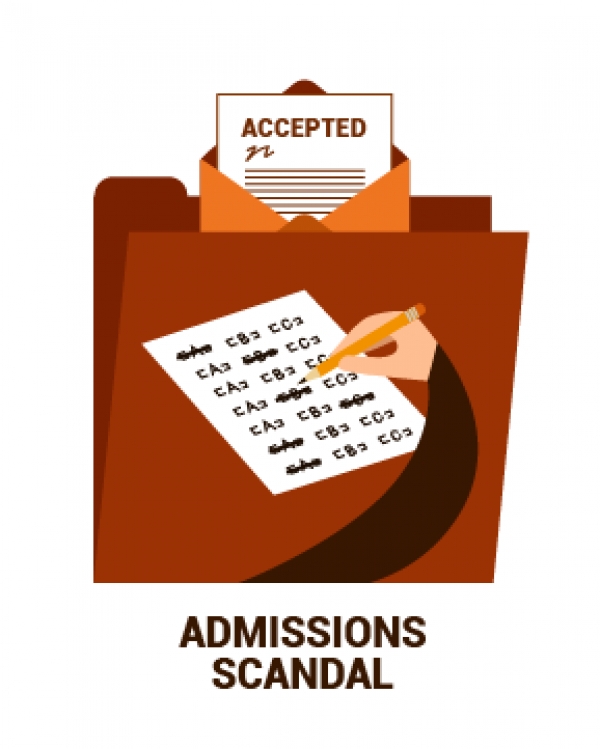 How admissions and athletics intertwine at Ivy Athletics was the “side door” that unscrupulous consultants used to help create fake all-stars to gain admission to prestigious colleges, especially in sports characterized as elite or privileged. The scheme became the admissions version of the Great Train Robbery. According to The New York Times, “The ruse was oddly simple. Since college coaches can often recommend more athletes to the admissions department than a team needs, why not buy a few slots from the coaches and sell them to parents desperate to get their children into the most selective universities?”

The Times reporters’ explanation generated more heat than light because it ran counter to the customary uses and abuses of athletics in college admissions. The traditional scandal was an ambitious coach who tried to enroll a talented athlete who did not have adequate high school grades and test scores. With the Varsity Blues cases, however, some coaches and athletic officials accepted bribes to advocate admission of an applicant who offered little as either an athlete or a student.

To show how this scheme contrasts with conventional procedures used to monitor academics and athletics in admissions, it’s useful to look at one conference and its colleges. For example, the Ivy League and its eight members are a significant case because they play in the National Collegiate Athletic Association’s Division I and their academic standards for admission are high.

The athletic admissions scam was surprising because few college coaches, including those in the Ivy League, have the luxury of recommending more athletes for admission than a team needs. The opposite is usually the case -- coaches must negotiate for a number of slots. This may be determined in part by NCAA limits on squad size or limits on allowable grants in aid and/or by a conference. “Stockpiling” of extra athletic admits for a team is rare because it means coaches from other sports probably are required to reduce their quota of recommendations for admits. In the Ivy League, each sport has a limit on the number of recruited athletes it is allowed. Football, for example, is allowed an average of 30 student athletes per admitted class.

At academically selective colleges, coaches face another internal hurdle. They must persuade the president, the provost, admissions officers and the athletics director that their particular sport warrants admissions spaces. Any admissions slots given to a coach would take away available slots from other student activities.

Why, for example, should a tennis coach be given five admissions recruits per year when directors of performing arts are also vying for talented recruits? It is a high-stakes deliberation and zero-sum game defined by strict limits on entering class size. To make the trade-offs even more complicated, every admissions slot dedicated to a talented student athlete could mean one less space for a nonmerit admit, such as an alumni legacy or the child of a generous donor.

These deliberations make admission of student athletes complex and competitive. For the Ivy League, it is a three-dimensional chess game. A crucial document for defining the rules of the game is the Academic Index, commonly known as the “AI.”

The AI and other selectivity measures mean that coaches are usually required to make recommendations for admitting recruited athletes within strict academic guidelines. In the Ivy League, a recruit must be within the bands of proximity to the overall profile of admitted students according to grades and SAT scores. If not, faculty complain about overemphasis. The coach and the admissions committee may go beneath the bands but usually only for a very talented and exceptional athlete. And any exception to the composite index must be compensated by having other recruits who are above the academic norms. In the case of the Ivy League, the scrutiny takes place within the institution and also is subjected to review by coaches and faculty representatives across the conference.

This latter provision means that the AI promotes “honor among thieves” within the coaching ranks of the Ivy League. They all know the rosters and data of their rivals and can raise objections. The wrestling team at Princeton University, for example, cannot have a composite AI that is out of whack with the norms for all student athletes in the conference or against the profile of Princeton’s entering class. The two-pronged objective is to build a floor of academic eligibility of athletes across all teams compared to the profile of member universities and, at the same time, discourage any coach from being a vagabond who chronically recruits student athletes whose academic records are egregiously subpar.

Another complication is that the Ivy League is distinctive among conferences in NCAA Division I in that it prohibits athletics grants in aid. Scholarship awards without loans are generous, but they are need-based and open to all applicants. There are no special funds for recruited athletes. Consider a situation in which the coach of Harvard University’s women’s soccer team is competing with Stanford and Northwestern University to recruit a high school senior who is a nationally acclaimed goalkeeper. She has high SAT scores and a 3.9 grade point average, yet her family income indicates that she does not qualify for need-based financial aid. Since athletic grants in aid are not need-based, Stanford and Northwestern can each offer her a full scholarship worth about $65,000 per year, whereas Harvard and other Ivy League institutions cannot award her any financial aid.

The peculiarities of Ivy League athletics and admissions surfaced in another recent article in The New York Times, as reporters noted, “The scandal has raised questions about whether such athletic preferences are fair -- or even necessary.” This then led to one high-profile college admissions counselor to tell reporters, “Ivy League and sports, to me that’s an oxymoron.”

This characterization of the Ivy League and sports was intriguing but not convincing for very long. In the same day’s issue of the Times, the headline story of the sports section was about American figure skating champion Nathan Chen, who is an undergraduate at Yale. Turning to the third page of the same sports section, another Times article reported that Bella Alarie “became a must-see player for the Princeton women’s basketball team” and is “looking to make an unusual leap from the Ivy League” to an extended career in the WNBA.

One can add to these selected biographical profiles of student athletes some statistics. The record books in recent years show Ivy League teams winning national championships in several sports, including men’s lacrosse, women’s soccer, men’s ice hockey, men’s crew and women’s crew. Cornell University’s wrestling team are consistently among the strongest in the nation. Ivy League student athletes include numerous individual champions in several sports, including wrestling and swimming, along with alumni who qualify to compete on Olympic squads.

In response to the rhetorical question in The New York Times as to whether athletic preferences are fair or necessary, the Ivy League represents a deliberate model to show that intercollegiate athletics are important. The conference sponsors 35 varsity sports. Harvard, for example, offers 42 varsity sports -- the most of any university in the NCAA. Reliance on the Academic Index indicates an approach with the intent to assure that this substantial commitment to sports stays within bounds academically.

But the AI operates on the presumption that a coach seeks admission for student athletes who will contribute to a winning team and also be academically suitable within the campus. As suggested by the scandal of recent weeks, these measures cannot guard against a coach or athletic official who literally plays by different rules using illegal acts to pursue other, dubious goals.

A side effect of the recent scandals has been allusion to the privileged character of many nonrevenue sports such as crew and squash that the Ivy League and other conferences offer. One partial reform for sports that are tilted toward affluent students might be to follow the example of Trinity University, a collegiate squash power, which has established a squash developmental program and league for elementary and high school students in the community, drawing from all family income groups. It has led numerous participants to receive athletic scholarships for squash.

Some of the media criticisms about allegedly elite sports seem wrongheaded. When the University of Southern California was charged with using its varsity crew team as a convenient place for fraudulent admits, college rowers elsewhere felt betrayed and perplexed by USC’s actions. The culture of intercollegiate crew is one of dedication and sacrifice, with few commercial rewards.

Furthermore, college crew coaches ranging from the University of Washington and the University of California, Berkeley, on the Pacific coast, extending to the University of Wisconsin and on to Harvard are resourceful in identifying raw talent from the ranks of high school swimmers and basketball players who may never have rowed prior to enrolling in college. One can find elaboration on this in such accounts as David Halberstam’s The Last Amateurs or in Daniel James Brown’s The Boys in the Boat.

The Ivy League’s decision to sponsor a large number of varsity sports includes a commitment to trying to fulfill gender equity in student activities. It shows how a conference can change to accept the letter and spirit of Title IX, especially after one Ivy institution faced a serious legal challenge in the courts when it cut some women’s varsity teams.

The Ivy League is not the Big Ten, nor is it the Atlantic Coast Conference, the Pac-12 or the Southeastern Conference. Within the NCAA, each conference and college must establish its own philosophy of how academics and athletics are to coexist. At very least, the Ivy League presidents and admissions officers have worked, and should continue to work, with coaches and faculty members to operationalize their ideas and ideals as part of the high stakes of selective college admissions.

Neither the structures nor strategies are static. As such, they are open to review and reform as new problems and prospects surface. About 10 years ago, presidents at several Ivy League universities considered eliminating some sports, such as varsity wrestling. And, of course, university presidents and all constituencies can and should discuss what is appropriate allocation of admissions recommendations for varsity sports as part of the educational mission.

In addition, the Ivy League administrators may wish to consider measures that will prevent the kinds of abuses uncovered in the past month that used athletics as an unethical and illegal means to gain admissions advantages. But such concerns should be dealt with in an informed, open forum and based on institutional goals and priorities. To dismiss varsity sports and the Academic Index out of hand as expendable and archaic is to overlook the heritage and promise of a sound scholar-athlete program as central, not peripheral, to the Ivy League undergraduate experience.