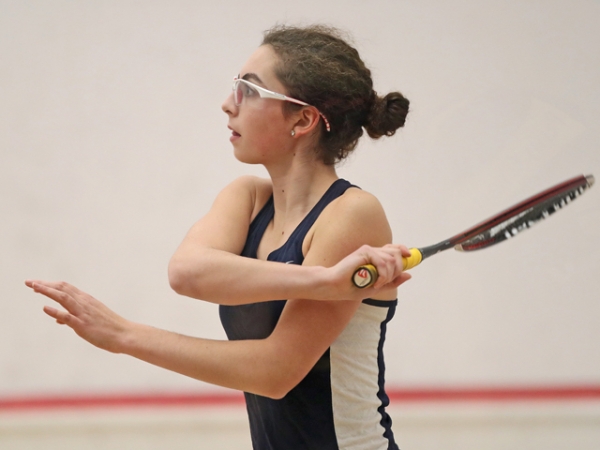 When Penn Charter’s middle school varsity girls lacrosse team played visiting Norwood Fontbonne Academy on a spring day in 2013, it was apparent that the youngest member of the PC squad was already one of the best players on the field. The slender sixth-grader was Elisabeth Ross, and she would go on to achieve great success in a different sport entirely, squash.

Ross, addressed almost universally by her initials, “ER”, was the U.S. Squash Under-17 national champion in 2017, and currently she’s ranked second in the country in the Under-19 category. In 2018 at the British Junior Open, a tournament which always attracts the top young players from around the world, she placed eighth. Later last year, she played for the U.S. at the Jr. World Individual Championships in Chennai, India.

Ross has been a member of the Penn Charter upper school varsity team since she was in seventh grade, already starting off in the third position among the nine flights for the Quakers. She was PC’s number two the following year, and from her freshman year on she played in the top spot. She will continue to study and play squash at Yale University, where she was accepted in December through the early admission program.

Penn Charter Director of Squash Damon Leedale-Brown noted that she had played 100 matches for the school during her long varsity career. Facing older players from seventh through 10th grade, she lost only six times.

As a junior and senior, she went through the school season, the Mid-Atlantic Squash Association tournament and the U.S. Squash High School Team National Championships without a single loss.

“She’s always been extremely competitive, and that shows in her squash,” Leedale-Brown said. “She wins a lot of matches against strong opponents because she’s willing to fight, dig deep and do what’s necessary to win. Some people have that natural competitive instinct and some don’t. Even with her natural talents, I feel the excellence she’s been able to achieve is down to the work she puts in, her desire to better herself every day.”

Her mother, Maggie, played squash in college and currently is a middle school coach at Penn Charter. Elisabeth first began to swing a racquet at age 6, and she was playing in tournaments by 10, training at the Germantown Cricket Club.

Ross only played lacrosse during her sixth-grade year, then participated in track later in middle school. After that, her spring season was given over to the increasingly extended squash tournament season and to school service projects.

In the fall, though, she played field hockey all the way through her senior season, with her superb eye-hand coordination making her an asset for Penn Charter teams.

“I love the team aspect of field hockey,” she said, but she also enjoys the individual focus of the game of squash.

“It gives you a way to challenge yourself all the time,” she explained. “The whole game is literally about how well you played; there’s no one else out there except your opponent. Because it’s a sport with a lot of different aspects, there are always ways to make yourself better and test yourself.”

Leedale-Brown is not a coach who wants to have his charges playing squash to the exclusion of all other sports.

He noted, “I think in understanding Elisabeth’s success it’s important that she’s not just been a squash player. I think the field hockey has actually helped in certain aspects of her squash. It’s provided some balance – not being able to play as much squash in the fall may have helped keep her healthy. It’s worked out well for her, because she peaks at the right time for the end of the season and the major tournaments.”

Elisabeth Ross is pictured after winning the Under-17 National Championship in 2017.

The coach related that “She was a pretty capable player even in seventh grade. She had a well-rounded skill set. In seventh and eighth grade, she struggled at times to manage her emotions; at times even when she won a game she would come off the court a cry a little. Being able to control her feelings kicked in in high school, and ever since ninth grade she’s been a great role model and an inspiring teammate for our other players.”

Ross commented, “I’m an emotional player and when I was younger it showed outwardly, but I’ve learned how to channel it back into playing squash. Sometimes I’ll lose focus and get down in a game, but then I’ll be like ‘No, you don’t want to lose’ and then I’ll come back and win.

“I think I made some big steps in that area in eighth and ninth grade,” she continued. “I was playing girls who were so much older than I was that to keep up with them, I had to mature myself.”

Leedale-Brown observed, “Playing number three and two at such a young age meant that with the talent in this area, she was already facing some of the best players in the country. That definitely helped her development.”

Speaking of her growth from a standpoint of technique, Ross related, “I used to have a really bad forehand, so I’ve worked very hard to make my forehand and backhand equal. Actually, this season is the first time I’ve felt really confident with my forehand and not afraid to play down that wall.”

Leedale-Brown said, “She’s extremely focused and extremely ‘present’ on the court. She has a natural instinct to press forward and volley and take the ball early. She’s always looking to cut the ball out and put pressure on her opponent, which is why she’s hard to play. I think she’s consistently been one of the best in her age group in terms of her athleticism and her ability to cover the court.

“In recent years,” he went on, “She’s developed more variations; the ability to lift, change rhythm and be a little more creative in certain area of the court.”

Through her high school years there haven’t been schoolmates who could seriously challenge her status as the Quakers’ number one, but Ross didn’t take her position for granted and never shirked her responsibilities to the team as whole.

“Elisabeth would never even think that would be appropriate because she has that great sense of team,” Leedale-Brown said. “She’s not a vocal kind of leader; Hatti Specter [a fellow senior this year] filled that role well for us. Elisabeth’s dedication and commitment always shows through and serves as an example. She’s there every day working hard, and she helps her teammates raise their level. She displays a great sense of humility in the midst of all her success, and that says a lot about her.”

In the classroom, Ross gravitates toward the areas of history and science.

“I could pursue biology or chemistry in college, but I’m not entirely certain about that right now,” she explained.

Her school service projects in the spring have included serving at the St. Francis Inn soup kitchen in the Kensington section of the city, and working in the after-school program at the Widener Memorial School in Olney, which serves students with physical and medical disabilities.

“I enjoy it a lot, because I form connections with the kids and we do a lot of things together,” she said.

Ross also performs in the Penn Charter Symphonic Band, having learned to play the French Horn in sixth grade.

In the college selection process, Ross narrowed her choices down to a short list that included Yale, Harvard and Columbia.

On her visit to Yale, she said, “I really just had this vibe that this was a good fit for me.”

Another top player from the Philadelphia area, Lower Merion High School’s Jed Burde, will also be a member of the freshman class at Yale in the fall. Ross noted that the senior assistant coach at Yale, Lynn Leong, has already talked to her about preparing for collegiate competition.

“She told me I should expect the college game to be a lot more physical than the juniors game, so I’m working on my fitness and conditioning,” the PC senior said.

Ross has attended Penn Charter since kindergarten, and enjoyed the entire experience.

She explained, “I liked how much it had to offer; good academics, sports, service opportunities, art and music. I got to do a little bit of everything, and I don’t think anything’s been left out of my school career.”

Like most high-level squash players, she wishes her favorite sport could gain a wider audience.

“It’s really fast-paced and it displays a lot of athleticism,” she said. “The rallies are very intense, with people hitting amazing shots and the other players getting to them somehow. A good match is riveting to watch, and I think more people should experience it.”