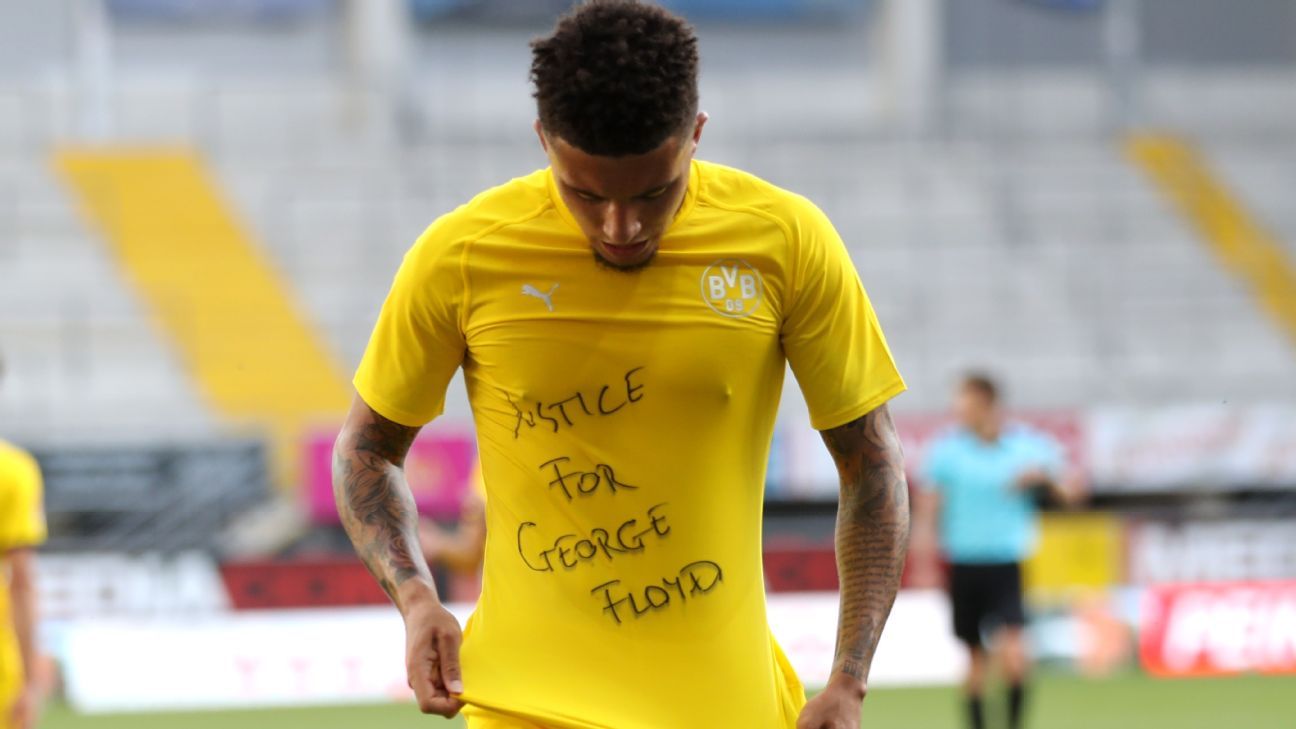 Borussia Dortmund winger Jadon Sancho removed his jersey to reveal the message "Justice for George Floyd" after scoring against Paderborn on Sunday.

Floyd, who is black, died in police custody in Minnesota after a white police officer kneeled on his neck for several minutes. The incident sparked protests in cities across the United States.

Minneapolis police officer Derek Chauvin was charged on Friday with murder in the death of unarmed 46-year-old Floyd.

Sancho, 20, went on to score a hat trick -- all three goals coming in the second half -- in Dortmund's 6-1 victory. The England international was booked for removing his jersey -- an act that is against football rules.

Sancho's teammate Achraf Hakimi also lifted his jersey to reveal a similar message in support of justice for Floyd after scoring late in the second half of the rout.

Earlier in the day, Borussia Monchengladbach forward Marcus Thuram took a knee after scoring his first goal on Sunday in honour of ongoing protests in the United States following the death of Floyd.

Protests have now spread to Europe, with people gathering in London and Berlin.

Gladbach tweeted an image of Thuram kneeling with the caption: "No explanation needed."

The forward's kneeling was similar to a gesture made by former NFL quarterback Colin Kaepernick, who in 2016 began kneeling during the U.S. national anthem to protest police brutality.

Thuram's father Lilian, a retired professional footballer and a 1998 World Cup-winner with France, is an anti-racism activist and UNICEF ambassador.

On Saturday, U.S. international and Schalke midfielder Weston McKennie also displayed his support for Floyd, wearing an armband with the message: "Justice for George." On Sunday, McKennie posted his support for Thuram on Instagram.

Thuram followed up his first goal with a second after 59 minutes, giving Gladbach a 3-1 lead against Union Berlin after the capital side had equalised just after half-time.

Alassane Plea, who assisted both of Thuram's goals, sealed Gladbach's win with a fourth goal in the 81st minute, sealing a 4-1 victory.

After the game, Thuram led celebrations for teammate Mamadou Doucoure, who made his first-team debut four years after signing for the club. Doucoure has suffered several injuries that have prevented him from appearing for the club since he signed in 2016.

More in this category: « Follow live: Gladbach takes on Union Berlin in Bundesliga action Silver: Older coaches could be sidelined in return »