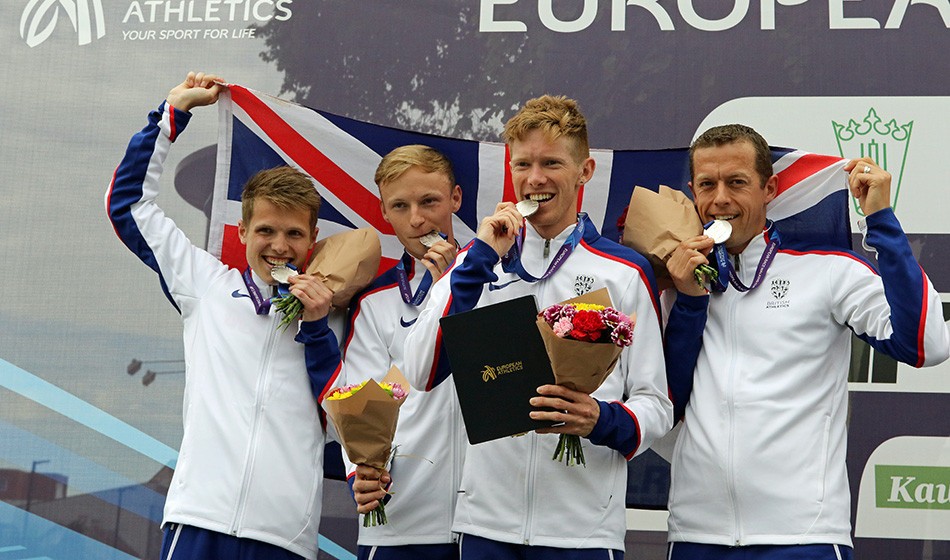 Great Britain took their first ever medals in the European Race Walking Cup when the men’s team claimed silver in the 20km event in hot conditions in Alytus, Lithuania, Ian Richards reports.

Tom Bosworth led the team home with a fourth-place finish, with Callum Wilkinson and Cameron Corbishley producing tremendous last laps to clinch the silver medal from Ukraine and Italy.

Bosworth moved ahead of Christopher Linke during the sixth 1km circuit and held a seven-second lead over the German. At the halfway mark Bosworth had a 13-second lead over the chase pack as he went through in 40:11. Wilkinson had moved up to 13th in 40:51 and Corbishley was in 26th in 42:16, with Dominic King clocking 44.10.

The chase pack had cut his lead to 10 seconds by 14km. Soon after this, Sweden’s Perseus Karlström and Diego García of Spain began to close down on Bosworth.

At the 18km point Russia’s Vasiliy Mizinov (ANA) had passed Bosworth and he was caught by Spanish duo Álvaro Martín and Miguel Ángel López. Bosworth repassed them on the 19th lap.

Bosworth matched his fourth-place finish of two years ago to clock 80:53 and move to the top of the UK rankings.

Wilkinson moved up to ninth, clocking 81:54, and Corbishley moved up to 25th place with a PB of 85:45 which moves him to 17th on the UK all-time list and inside the British qualifying time for the European U23 Championships (86.00). King was disqualified.

“I felt so good today I really thought I would win a medal,” said Bosworth. “I walked 3:57 for the lap they caught me. I rolled my ankle at the point when I was fighting for the bronze medal. I battled back on the last two laps.

“I am gutted to finish fourth again, but the team medal makes up for some of my personal disappointment.”

In the under-20 men’s 10km, Chris Snook was a brilliant fifth, clocking 43:45 for the highest ever finish by a British athlete in that event. The race was won by Italy’s Riccardo Orsoni in 42:43.

Snook said: “Despite being ill recently it is great to finish fifth in Europe. I am a bit disappointed not to walk faster and get the 43:00 qualifying time for the European Juniors.

“My plan was to go with the main pack, but unfortunately I couldn’t quite hold the pace in the second half.”

In the women’s 20km Heather Lewis and Bethan Davies both set of in search of the British standard for Doha of 93:30.

The home crowd went home happy as Živilė Vaiciukevičiūtė took victory in 89:48 ahead of Spanish duo Laura García-Caro in 89:55 and Raquel González in 90:17.

In the men’s 50km, France’s world champion Yohann Diniz led from gun to tape to take victory in a championship record of 3:37:43. He lapped every other competitor twice apart from silver medallist Dzmitry Dziubin of Belarus (3:45:51) and João Vieira of Portugal in 3:46:51.

Julia Takacs of Spain set a national record of 4:05:46 for silver, with former world record-holder Inês Henriques in bronze in 4:13:57.