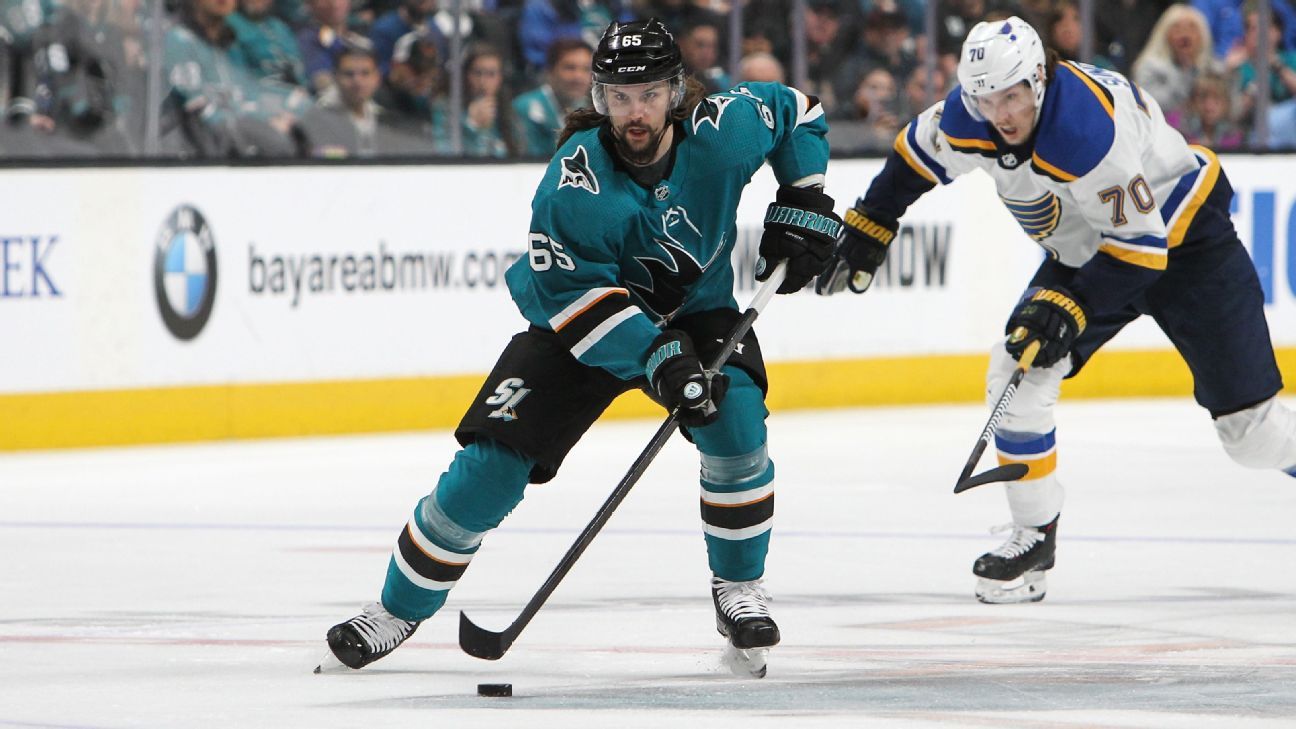 SAN JOSE, Calif. -- From the scoreboard to the trainers' room, the San Jose Sharks were bruised and battered in Game 5 by the St. Louis Blues.

There was the 5-0 final score, as lopsided in the final math as it appeared on the ice, with the Blues controlling play from the second period onward to take a 3-2 series lead in the Western Conference finals. But more distressingly for San Jose, there were a parade of injuries that left the Sharks without key players Tomas Hertl, Joe Pavelski and Erik Karlsson in the third period, thwarting any hope of a rally.

"You don't want to make excuses, but some pretty key guys that are going down, some offensive guys that when you're playing from behind like that, it's tough to push the pace," said Sharks defenseman Brenden Dillon, who is typically Karlsson's partner. "We had a couple chances on the power play to kind of get some traction and some looks, but I think at the end of the day we need to kind of ramp up our level instead of go the other way."

Karlsson's status was questionable before Game 5, after missing eight critical minutes of the third period of Game 4. He didn't look much better on Sunday afternoon, clearly laboring in his skating and playing passively, a result of what has been speculated to be a groin injury for the 28-year-old star defenseman.

That was evident on two of the Blues' first three goals. At 5:50 of the first period, Karlsson misfired on a pass to Dillon and Oskar Sundqvist snapped a goal past Martin Jones, using Karlsson as a screen. "They scored where we turned it over and inadvertently screened our own goalie. Joner didn't really have a chance on that one," Couture said.

Historically known for his closing speed as a defenseman, Karlsson was unable to race back to defend Blues forward Vladimir Tarasenko on a breakaway. Brent Burns tripped him on a breakaway, and Tarasenko deposited the puck over Jones' glove on an penalty shot for a 3-0 lead.

After playing 7:29 in the first period, Karlsson played just 3:03 in the second period and did not return for the third.

Sharks coach Peter DeBoer was asked if he regretted playing Karlsson in his condition in a critical Game 5. "Hindsight is 20/20, you know? We make those decisions based on the reports we get from the player and the medical [staff]," he said. "The report was that he felt he could play and get through the game. It's easy to sit here and say now, 'Yeah, sure you have regrets.'"

The other two injuries occurred during the game, on questionable hits from the Blues.

Hertl was hit high by Ivan Barbashev in the first period, and did not play in the third period. DeBoer argued it should have been a major penalty.

"Arguably five-minute major on Tommy Hertl that, if it's called, maybe that's a momentum-changing play right there," he said. "But we come out of the first down 1-0, and then Hertl can't go and, you know, Karlsson can't go. So we started taking on some water."

The flood continued when Pavelski was hit high by Blues defenseman Alex Pietrangelo and went to the dressing room just 1:31 into the third period.

Pavelski, who missed six games with a concussion in the second round against Colorado, did not return to the game. Joonas Donskoi, who was hit in the face with a puck during the game, returned to play in the third period.

Couture said that the NHL's Department of Player Safety may have paved the way for hits like the one that took Hertl out of Game 5 by not disciplining Blues forward Sammy Blais for his Game 3 headshot on defenseman Justin Braun.

"I saw the Hertl hit. I just watched the replay. Yeah, that's a tough one. But, I mean, when they had one earlier in Game 3 on the hit on [Justin] Braun and nothing happened, so they can do it again, right?" he said.

Couture also wasn't happy with the way the Sharks responded to that physicality in the third period, taking five minor penalties with Evander Kane and Micheal Haley picking up 10-minute misconducts.

"[We need to] control our emotions in the third. It's a three-goal game, we obviously took way too many penalties. You can't win or come back when you're in the box all period. It got away from us at the end. I would have really liked us to control our emotions and at least give ourselves a chance," he said.

The Blues knew the Sharks would attempt to play more physically as the game got out of reach. "We knew they were going to come out in the third period and look to hit. But we just try to focus on our game, we try to keep our cool. They can run around, but I think the refs handled it pretty good," St. Louis defenseman Joel Edmondson said. "I'm not going to poke the bear or anything. We're just happy with the way we played and we kept our cool."

The Blues have to be feeling cool heading back home for Game 6, seeking their first Stanley Cup Final berth since 1970. They've outscored the Sharks 7-1 since that controversial hand-pass goal that ended Game 3 in overtime. They controlled much of Game 5 after ceding the puck possession advantage to San Jose in Game 4.

And now they can add team health to the list of advantages. Sharks coach Peter DeBoer offered no update on the status of Pavelski, Hertl or Karlsson for Game 6.

Couture said the Sharks have faced this kind of adversity all postseason.

"We're still alive. We've been in this spot before, going to Vegas down 3-2 in a very difficult building. St. Louis is similar, it's a tough building against a good team. A structured team. We scored one goal in the last two games, that's not going to cut it," he said.