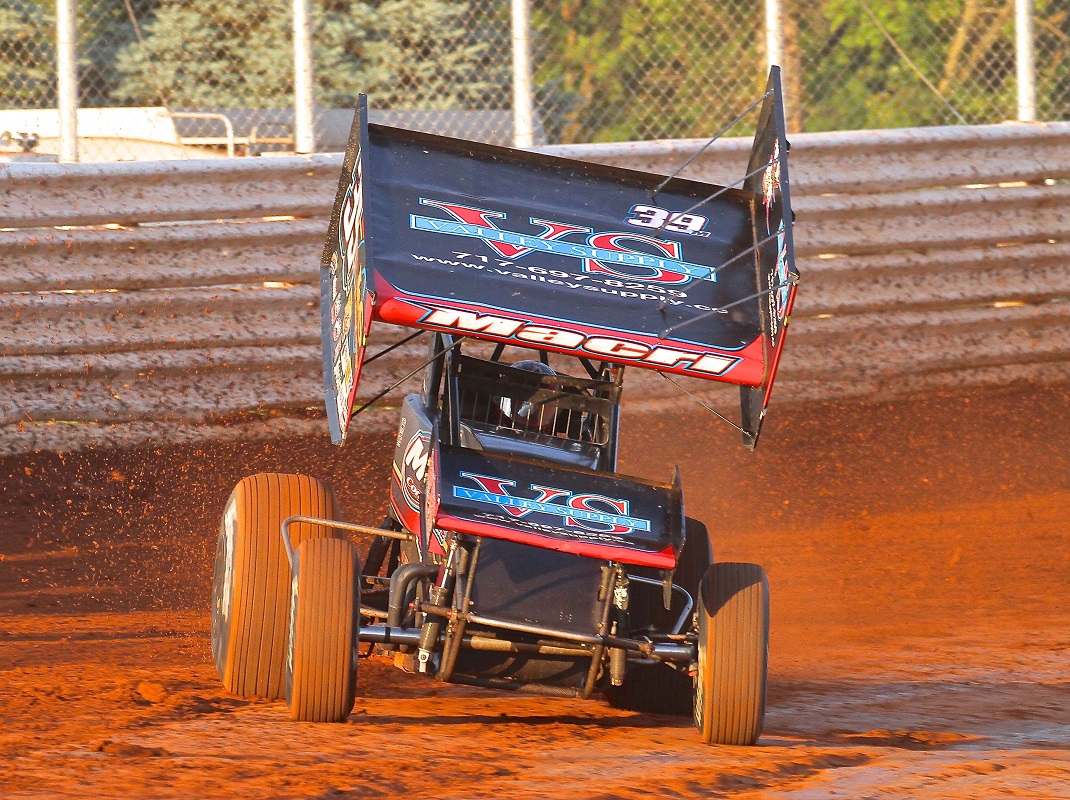 SELINSGROVE, Pa. – After a surprising DNQ during the second round of Pennsylvania Speedweek presented by Red Robin, Anthony Macri roared back in a big way Sunday at Selinsgrove Speedway.

Macri contended for the win against the likes of eventual victor Danny Dietrich, Kyle Larson and Rico Abreu before settling for a fourth-place finish, being passed by Larson for a podium spot on the final lap.

The 21-year-old had won three-straight races at Port Royal (Pa.) Speedway entering PA Speedweek, so confidence was high in his team’s camp and Saturday’s misfortune was a bit of a surprise.

However, Macri dug his heels in and rallied, showing he’s still got what it takes to race with the best.

“It feels pretty good,” said Macri of posting a top-five run at Selinsgrove. “We knew going into [Saturday] that Lincoln wasn’t going to be a strong suit. It was definitely a kick in the teeth to not qualify, because we have the caliber of stuff to qualify. But I told the guys at the car wash, ‘We’re leaving last night behind, we’re washing it away and we’re going to come back and have a better night.

“I thought we had a chance to win, but Dietrich just outsmarted us in lap traffic. I’ll take this one.”

Despite a positive showing at Selinsgrove, however, Macri is still unsure how that momentum will carry back into a return to Lincoln’s three-eighths-mile oval on Monday night.

“We have some new stuff we’re going to try, since we might be out of the points [battle],” Macri added. “We’re using [Monday] as a test and tune. It seems like every time we go there [to Lincoln], we’re so far off it’s not even funny. But we’ll see how it goes.”

Macri is 10th in points, 198 back of point leader Dietrich, going into Monday’s PA Speedweek round.

– Despite only being a third of the way through PA Speedweek, Freddie Rahmer is rapidly approaching a potential must-win scenario if he wants to keep any hopes of a first PA Speedweek title alive.

Rahmer is third in the mini-series standings, but already more than 70 points back of Dietrich’s leading point total and winless through the first three nights. With wins paying 25 extra points toward the PA Speedweek crown, Rahmer may need to win more than once to give himself a fighting chance.

– Mathematically, that trio – Dietrich, Larson and Rahmer – look to be the favorites through the remainder of the nine-race sequence to be contending for the PA Speedweek crown.

Fourth-place point man Ryan Smith, driving the Heffner Racing No. 72, is 135 markers in arrears and one point ahead of Brock Zearfoss among the top-five runners in the standings.

With just 185 points available per race, it will be a long road for anyone else to get back in the hunt.

– Rico Abreu’s runner-up finish Sunday night at Selinsgrove was easily his best run of the week, and a much-needed boost for the St. Helena, Calif., driver’s sprint car program in general.

Abreu has struggled of late to get his No. 24 going in the right direction, and a season-high effort against the Pennsylvania Posse may signal that he’s found some of the speed he was missing in May and June.

– Lincoln Speedway, site of Monday night’s PA Speedweek round, is one of the most-tenured facilities on the tour’s annual schedule, hosting twin races since 2017 and appearing on every PA Speedweek calendar since the advent of the mini-series in 1991.

In fact, when taking rainouts out of the equation, Lincoln has completed more PA Speedweek features than any other track. Its most recent event Saturday was the 38th such race in track history.

– Racing begins Monday night at Lincoln at 7:30 p.m. ET. The 410 sprints are the only class competing.

DMI’s vision is to create a relationship with their customers, where they know that not only are they a valued customer, but also a part of the DMI family. They want the customer to know that their successes are DMI’s successes, and they will do everything possible to prove to the customer they made the right choice by entrusting DMI with their safety, providing them a fair value and offering the highest-performing components available in motorsports today and in the future.