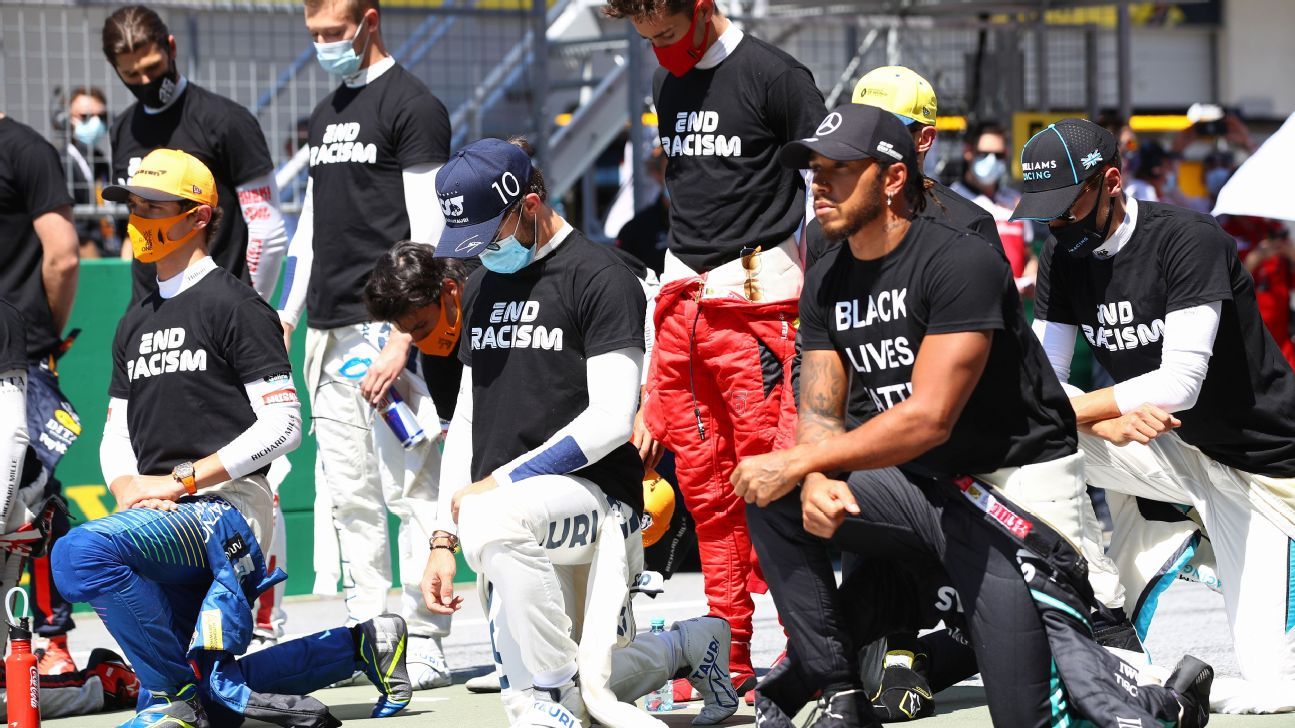 Max Verstappen, Charles Leclerc and Kimi Raikkonen were among the six drivers who declined to take a knee ahead of the Austrian Grand Prix on Sunday.

Ahead of the race, the opening event of the 2020 season, drivers displayed T-shirts carrying the message "End Racism," which was also written on the start-finish line. Reigning world champion Lewis Hamilton, the sport's only Black driver, wore a T-shirt with the message "Black Lives Matter."

Before the drivers gathered together for the Austrian national anthem, they stood in a line. Fourteen of them took a knee, while six stayed standing. In addition to Verstappen, Leclerc and 2007 world champion Raikkonen, Daniil Kvyat, Carlos Sainz and Antonio Giovinazzi also stood.

Ahead of the race it had emerged several drivers had voiced their discomfort with the kneeling gesture. Verstappen and Leclerc had posted their reasoning to social media ahead of the race.

"I believe that what matters are facts and behaviours in our daily life rather than formal gestures that could be seen as controversial in some countries," Leclerc wrote. "I will not take the knee but this does not mean at all that I am less committed than others in the fight against racism."

"I am very committed to equality and the fight against racism," Verstappen wrote. "But I believe everyone has the right to express themself at a time and in a way that suits them."

I believe that what matters are facts and behaviours in our daily life rather than formal gestures that could be seen as controversial in some countries. I will not take the knee but this does not mean at all that I am less committed than others in the fight against racism.

I am very committed to equality and the fight against racism. But I believe everyone has the right to express themself at a time and in a way that suits them. I will not take the knee today but respect and support the personal choices every driver makes #WeRaceAsOne #EndRacism

Speaking after qualifying on Saturday, Hamilton had called the drivers' briefing of the previous day "interesting."

He said: "In the meeting I just acknowledged a lot of the drivers that there was an interpretation of a message that I'd posted asking for people to speak out in their silence, and just saying thank you for those that have said something on their social platforms as they have a great voice and great platform and then encouraging the others who haven't to say something and I just described the scenario that silence is generally complicit.

"There is still is some silence in some cases but I think it's also part of a dialogued and trying to understand as I still think there's people that don't fully understand what's happening and the reason for the protest so I continue to try and be that guider, and influence as many people as I can with it."

Haas drivers was one of the 14 to kneel but on Saturday evening he explained he was not doing so in support of the Black Lives Matter movement, but the wider issue of racism.

Haas driver Kevin Magnussen confirmed he will kneel before the race but clarified that he is not doing so in support of a particular organisation, but the wider anti-racism message.

"I think it's something that there's been a lot of talk about and it's a difficult one because there's always going to be people who interpret it in different ways," Magnussen said. "I am going to take a knee but not because I'm supporting the BLM organisation, I'm just supporting the whole movement that the whole world seems to be coming together for ending racism. That's what I'm for, and that's what I'm trying to show tomorrow by kneeling.

"I hope that the kneeling part isn't owned or whatever by one particular group or organisation, I hope people will see it as a symbol of support for the whole movement that is going on at the moment for ending racism and discrimination."