Virus hit Braves' Freeman 'like a ton of bricks' 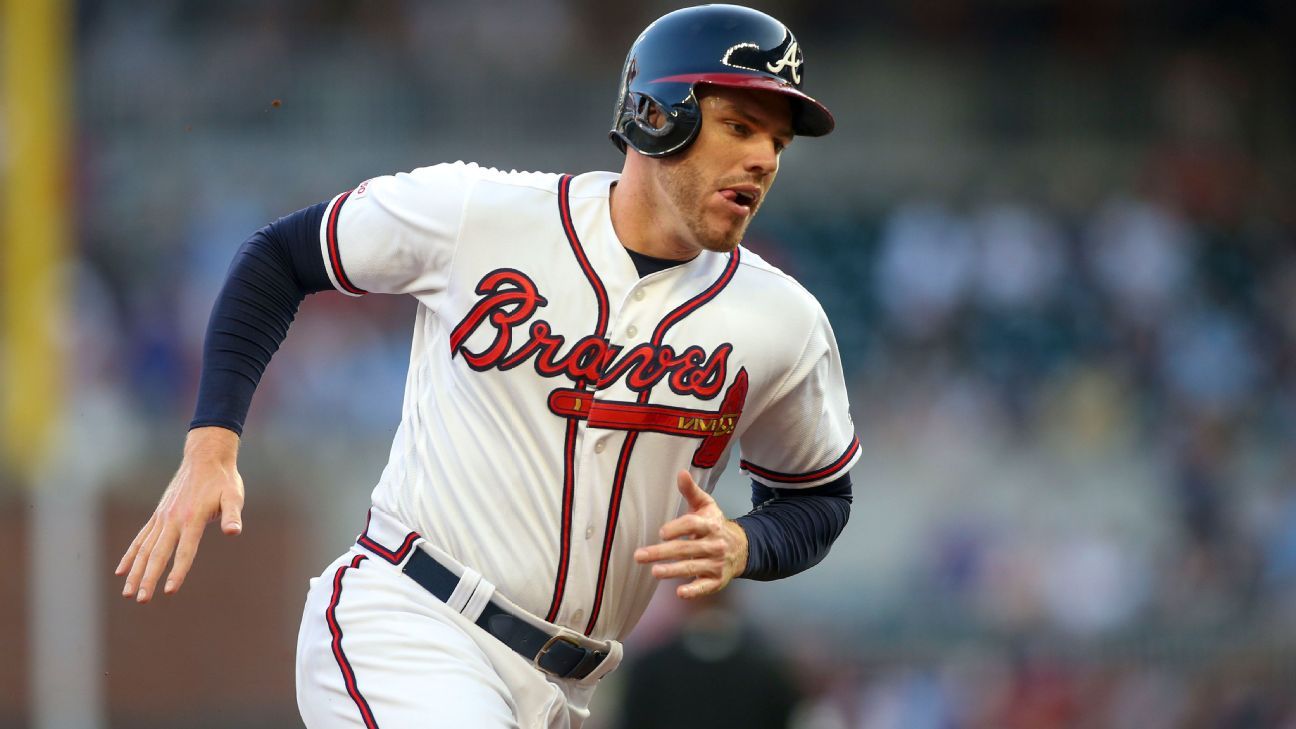 ATLANTA -- Atlanta Braves four-time All-Star Freddie Freeman, premier reliever Will Smith and two teammates have tested positive for the coronavirus, a jarring hit to the NL East champions less than three weeks before the start of the pandemic-delayed season.

"It will be a while before we can get him back," manager Brian Snitker said Saturday about Freeman.

Snitker said the four players, including right-hander Touki Toussaint and infielder Pete Kozma, agreed to have the team disclose their positive tests.

Snitker said Freeman had a negative intake test early in the week before having a positive test Friday. Snitker said the first baseman has a fever and "is not feeling great."

Freeman's wife, Chelsea, posted on Twitter that he had "body aches, headaches, chills and a high fever.''

"He is someone who literally never gets sick and this virus hit him like a ton of bricks," she said. "We've been really strict for the last 4 months," she wrote. "Haven't gone to a grocery store, haven't gone out to dinner once, haven't seen our friends ... and still got it."

Major League Baseball has scheduled the 60-game season to start on July 23. Freeman is the biggest star in the sport so far to have his positive virus test publicly announced by his team.

It is too early to know if Freeman's status for the start of the season could be jeopardized.

"It's a serious matter," Braves outfielder Nick Markakis said. "I hope Freddie heals up quickly. I know he's young, healthy. I hope he heals up and gets back as quickly as possible because as you know with 60 games, one week can change things quickly."

The 30-year-old Freeman set career highs with 38 home runs and 121 RBIs last season to help Atlanta win its second straight NL East title. He placed fourth in the NL MVP voting in 2018 after hitting .309 with 23 homers and winning a Gold Glove.

Atlanta signed Smith, an All-Star with the San Francisco Giants last season, to a three-year, $39 million deal in November. He had 34 saves in 38 opportunities while going 6-0 with a 2.76 ERA

Snitker said Smith and Toussaint have no symptoms. He said Kozma, who is working with top minor leaguers at the team's Triple-A Gwinnett facility, has a fever.

Snitker said concerns will remain even after the four players return to workouts.

"Guys have gotten it more than once," Snitker said. "We're going to have to be careful all year, and it's going to be the new normal for the next three months."

Snitker said it was important for baseball and society to know even one of the game's biggest stars can test positive. . Snitker said he was surprised the numbers were not higher.

"It sobers everybody up that this is real," Snitker said. "... It shows that this is a real deal and no one is immune to it."

The Braves began their summer workouts at Truist Park on Friday and continued Saturday with only small groups on the field together and attempts made to practice social distancing.

MLB and the players' association announced Friday that 31 players and seven staff members had tested positive for COVID-19, a rate of 1.2%.

Snitker also said first-base coach Eric Young Sr., 53, has opted out of the season because of concerns about the COVID-19 pandemic.

"I applaud EY," Snitker said. "It was a tough decision for him. He's an old gamer and we'll miss him dearly for what he brings inside this clubhouse and his energy and everything."

DeMarlo Hale, who had been a special assistant with the team, will fill in for Young to coach outfielders and serve as the first-base coach.