Frenkie De Jong is ready for the challenge at Barcelona 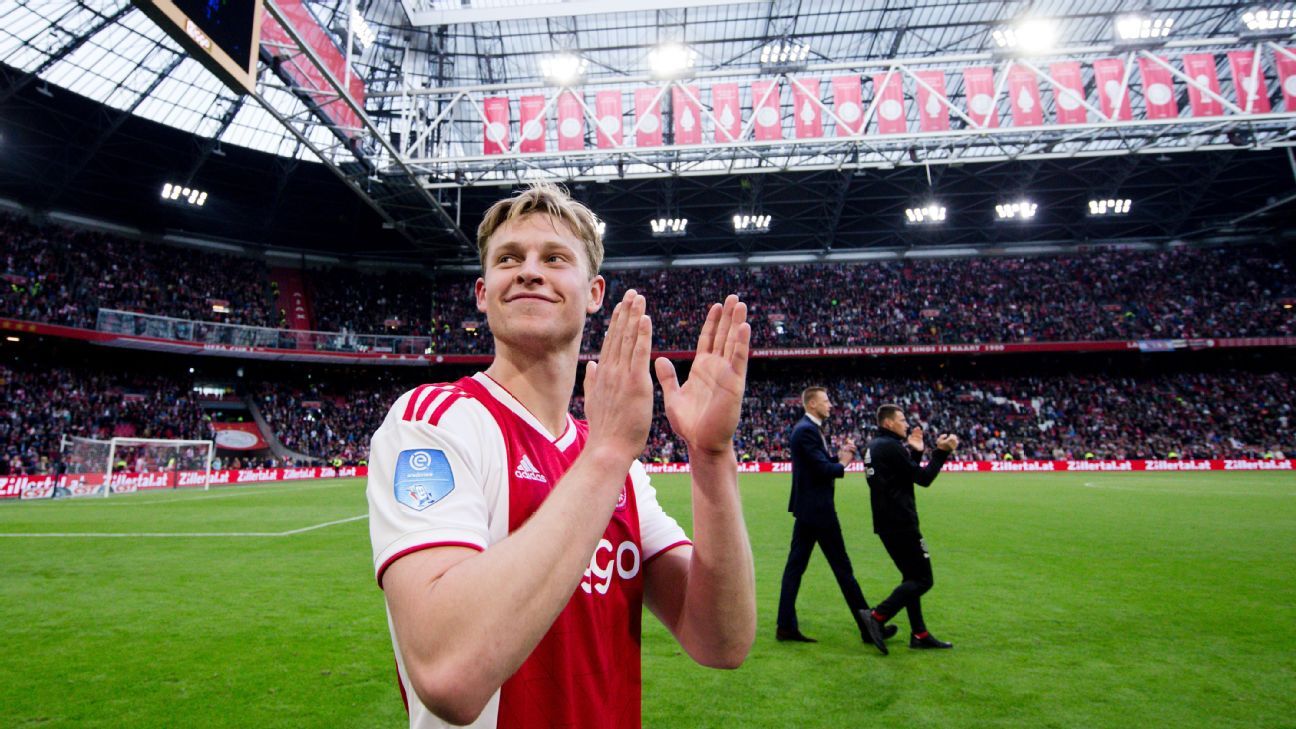 Frenkie de Jong receives a back-pass standing still in the Ajax half. Real Madrid's Vinicius Junior and Luka Modric charge at him, but the Dutch playmaker, who seems to have all the time in the world, turns full circle and then accelerates away, leaving Modric chasing helplessly behind him. Vinicius, who has missed him by meters, falls over. The scene is a thing of beauty, like Charlie Chaplin escaping a posse of cops. Ajax won 4-1 in the Bernabeu on March 5.

There are supposedly no secrets in top-level soccer anymore. Everyone has been scouted, it seems, yet opponents are still trying to figure out how to handle De Jong. Last August, the Dutchman, who just turned 22 on May 12, was almost unknown outside the Netherlands. By January, Barcelona had agreed to buy him for between €75 million and €86 million (depending on bonuses or add-ons/incentives). Barcelona's president Josep Bartomeu admitted to me that the signing was "risky, of course, because he's young" but then said "there are players that maybe one or two seasons they are the best, and other players are so talented that they last 10, 12 years like Leo Messi, or [Gerard] Pique.

De Jong is a beautiful player, but will he turn out to be a great player? Is Barcelona the right club for him, and how will he change there?

For now, De Jong is possibly unique in soccer: a playmaker who habitually dribbles out of his own defense. In his first full match against top-level opposition -- vs. France in Paris in September -- he kept going past the French captain Antoine Griezmann. Later Griezmann named him as his best-ever opponent, saying: "I tried very often to put him under pressure, but it never worked."

This makes De Jong the ideal creator for modern soccer. Pep Guardiola believes that as defenses get savvier and quicker, it's becoming hard to pass them apart as his Barca sides did a decade ago. Now you need players who can create numerical superiority by beating a man and then giving the killer pass. That's De Jong. In the Champions League through the quarterfinals, he gave 134 forward passes inside the other team's half -- more than any other midfielder except Madrid's Toni Kroos, according to data providers Opta. De Jong is also a remarkably effective (and elegant) tackler.

It's no wonder that half the big clubs in Europe came in for him. Last summer he turned down Tottenham, who deserve kudos for spotting him first, but this winter the shortlist was another level entirely: Guardiola's Manchester City, Paris Saint-Germain and Barcelona. De Jong would reportedly lay awake at night sometimes, fretting over the choice.

Whatever De Jong's criteria, Barcelona don't appear to have made him the biggest offer. They claim (oddly, given that their annual revenues of over €1 billion are the highest of any sports club in history) that they cannot match City's or PSG's salaries. But De Jong grew up with a very Dutch love of Barcelona. There's a photograph from 2015 of him and his girlfriend posing in the stands of the Nou Camp before a game: just two ordinary teenage fans enjoying their moment.

As a player, he seems made for Barca too. Both Ajax and Barcelona were bequeathed almost identical styles by the same father, Johan Cruyff. De Jong isn't Cruyff, of course, but his long torso, short legs, upright head, and surprising decisions recall the great man.

Bartomeu repeated for me the pitch he made to De Jong and his father. "Whoever is the coach of Barca, the style will be always the same. Now we have Ernesto Valverde as coach. The following coach will be another name, but you don't see too many differences. Other clubs, depending on the coach they choose, change the style or the idea of the football.

"If you look for a coach, go with Pep Guardiola, but when he leaves City, I don't know who is going to be the following coach. If you look for money, go to PSG. You will be a billionaire. But if you want to enjoy your life for the next 12 or 14 years, come to Barcelona."

Bartomeu adds, "Frenkie is 21, but his maturity is older. He knows what he wants. He doesn't want to be the best footballer in the world. The first thing he said was 'I want to enjoy my life with my girlfriend, playing.'"

De Jong's worry was that he wouldn't get enough playing time at Barça "especially because I'm a doubter by nature," he told Dutch magazine Voetbal International. After all, he considers Sergio Busquets the world's best defensive midfielder. Breaking into PSG's team looked more realistic, even if he couldn't imagine spending a decade in the French league. But Barcelona told him that in the short-term, he could fit into either of the two midfield positions in front of Busquets.

Finally, De Jong decided that if he turned down Barca, he might spend his life wondering whether he could have made it there. As he told Voetbal International: "You have to have a bit of faith in yourself." Bartomeu assured him: "If one day you say 'I don't like it,' we will talk. We are not a prison." When Pedro, Alexis Sanchez and Marc Bartra had asked to leave, Barcelona did let them go.

Money isn't De Jong's primary motivation: he drives a Mercedes, but not the most expensive model. Still, at a crucial point during the contract negotiations, Barcelona's kit sponsor Nike agreed to top up his salary. Nike wants to put the name Frenkie on his shirt. The player, named after the 1980s British band Frankie Goes to Hollywood, isn't sure about that, but given what we know about money in soccer, it will happen. When he finally signed a five-year contract, Barca asked him to knock Real Madrid out of the Champions League, so he did. Yet Barcelona's former coach Louis van Gaal believes that perhaps he should have joined PSG first.

"He still needs to go through a whole development," Van Gaal said on Dutch TV. "If [Ivan] Rakitic and Arthur don't leave, it's going to be hard for Frenkie to play them out of the team."

Anyone who watched the Netherlands' 3-2 defeat to Germany on March 24 will have seen Van Gaal's point. Whenever the Dutch tried to build from the back, the Germans filled the spaces around De Jong. He failed to make space for himself, and so the Netherlands, dependent on him and Memphis Depay for creativity, was stifled. His tactical helplessness was surprising for a man capable of providing an acute analysis of a game on live TV moments after walking off the field.

Stewart Robson shares his thoughts on the best young players under 21 years of age, identifying the ones he believes will become superstars.

At Barca, a team with many creative threats, opponents won't be able to target him the same way, but De Jong does need to learn how a player without much speed can find space. He also knows he needs to register more goals and assists.

Furthermore, no club at the highest level will tolerate his current appetite for risk. Even in the most dangerous situations, he considers it beneath him to give a boring square ball or back pass, so opponents now try to choose the right moment to press him. He gave away a goal against Bayern in December with a bad pass, and very nearly another in Madrid when he lost the ball to Karim Benzema just outside his own penalty area. After the game a Dutch TV presenter told him, jokingly, "Don't do that again." De Jong laughed before replying: "I think: do it, but better."

All his life he has ignored advice to play it safe. He has said, "My quality is my intuition. I can't just ignore that, can I? Then I'd be a player of whom there are a thousand of my age. Often I'd say I understood the coach, then do my own thing on the field."

Still, he will have to learn that sometimes, when there's a Benzema at his back, he needs to be boring. Over the next decade, he might well become as good as Bartomeu and Barca envision, but along the way, he will also become a more normal, less extraordinary player. Something will be lost in translation, so enjoy the untamed version now.

More in this category: « Ramsey has played last Arsenal match - Emery Sources: Man Utd to move for Magpies' Longstaff »
back to top