Man City keep or dump: Who has a part in the future for Pep Guardiola's all-conquering side? 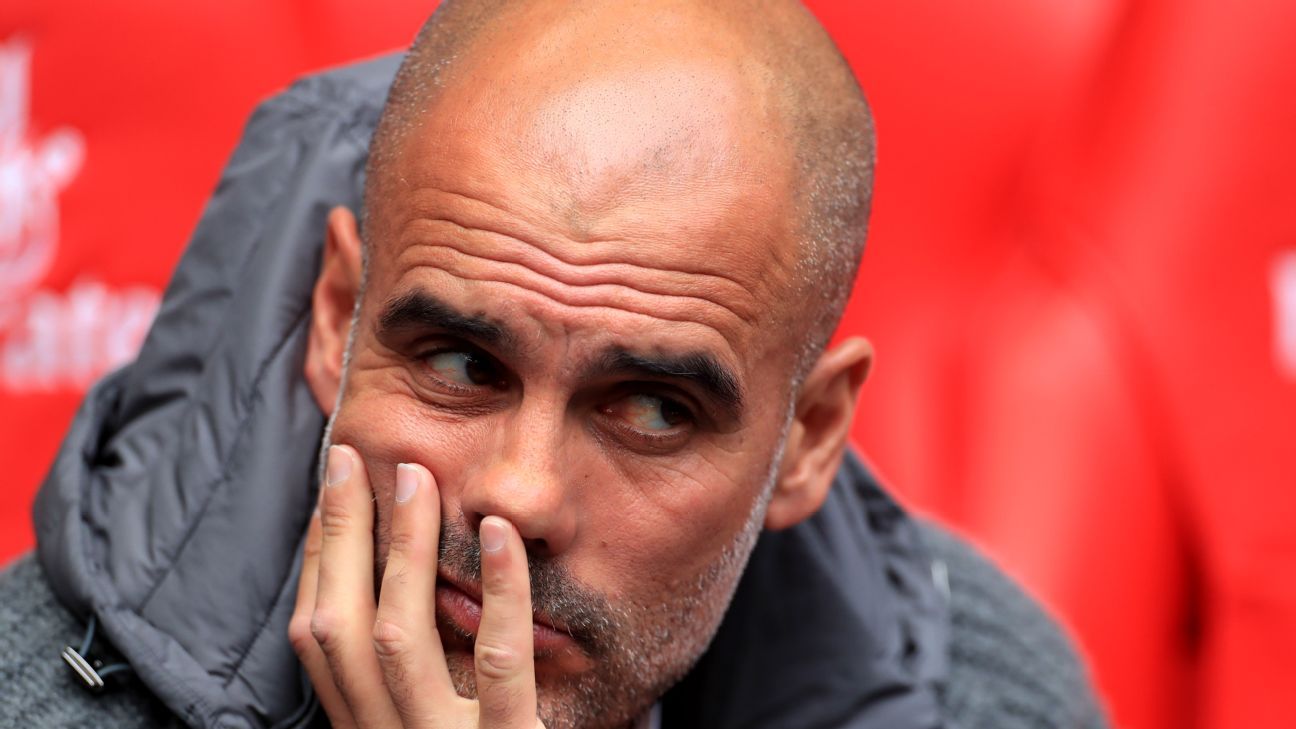 We thought that completing this exercise for Manchester City would be rather straightforward. You win your second league title in a row, you get a domestic Treble along the way, everything is golden, right? Not quite and not just because of the UEFA investigators.

There is some work to be done on this squad if they are to stay ahead of the curve. Between players who are leaving (Vincent Kompany), may want to leave (Ilkay Gundogan, Nicolas Otamendi) and have contracts which are winding down (Fernandinho, David Silva, there are some big calls to make). And when you consider the Pep Guardiola mantra about endlessly pushing yourself, this could be a busier summer than anticipated.

So here's our assessment of the squad, with an eye towards the immediate future. We disagreed on a number of points...

- 30 Under 21: The best young soccer players
- Barnwell: Premier League winners and losers
- Thompson: What a trophy would mean to Liverpool
- Keep or Dump: Who has a future at Man United?

OGDEN: "He's been injured all year, at his age he may want regular football, so you look to move him on."

MARCOTTI: "I agree, he's never going to be No.1 again and if he wants to go, you let him go, though you won't get much in return. If not, keep him around until his deal expires."

OGDEN: "They like him a lot but I think they need a veteran backup, so send him on loan."

MARCOTTI: "I'm OK with sending him on loan but if you do that, you should extend his contract.

VERDICT: Loan out to get him experience

OGDEN: "I don't think Pep trusts him and if you bring in a top drawer central defender to replace Vincent Kompany, he's not going to play much. And at his age, he'll want to play."

MARCOTTI: "It depends who you bring in. There's something to be said about having a bit of nasty and a bit of experience in your side. If it's a youngster, I'd keep him around, provided he wants to stay."

OGDEN: "They've been trying to get rid of him for years. Sell if you can, otherwise give him away."

MARCOTTI: "You won't get anything back for a guy who hasn't played in 15 months and is out of contract in June. Nurse him back to health if you can and at least he's another body in the mix."

OGDEN: "He can't stay fit and there are concerns over how committed he is. Sell and upgrade the position."

MARCOTTI: "I think there's a good player in there and there are enough other areas in the team that need to be sorted. I'm comfortable with him as part of the left-back rotation."

OGDEN: "He's reliable, he can back up a bunch of positions and he's the perfect quality squad player."

MARCOTTI: "I agree. He's a human insurance policy and I think Walker's minutes might come down next year."

OGDEN: "It's nice to have homegrown guys in the squad and, at the very least, you extend him to preserve his value."

MARCOTTI: "He was a starter on a very good Championship side last year and he's young and English so you must extend him, because he's an asset. If Otamendi does stay and you do bring in a top central defender, you'll want to loan him again though."

OGDEN: "He's still young, but he's had two seasons on loan at Girona without pulling up trees."

MARCOTTI: "You can probably use another defensive midfielder, but it's not him, and not now anyway. Let him mature elsewhere -- he's still young."

OGDEN: "He's important in the dressing room and there is no obvious replacement."

MARCOTTI: "At that age, you don't extend him unless he's fully fit and has a great season, but of course you keep him. He can help his long-term replacement settle."

MARCOTTI: "I wouldn't give up on trying to persuade him. Maybe you take a gamble and if he gets regular football, he'll want to stay. I think he really came on strong down the stretch."

OGDEN: "Take what you can get now. Maybe send him back to Aston Villa if they get promoted or something."

MARCOTTI: "He was a big contributor in 2017-18 but if you get a proper left-back and proper midfielders, there's no room for him. Sell."

OGDEN: "Obviously keep, unless he wants to leave. There have been suggestions that he might want to move on to end his career."

MARCOTTI: "If there's one guy, other than Kompany, who ought to get to choose his future after what he's done for the club, it's him. Let him decide."

VERDICT: Keep, unless he wants to leave

OGDEN: "I think it's obvious Pep doesn't feel he's the player he thought he could be when he signed him. And if you sell him now, with two years left, you can get a very good fee... unlike, say, with Mahrez."

MARCOTTI: "It's madness to sell. He's 23. He can still grow, he has a unique skill set. Extend his contract to protect yourself and then if somebody else wants to come in for him, they can pay big money."

OGDEN: "He's been up and down and if you could get your money back, you'd maybe sell him. Yet that's not realistic."

MARCOTTI: "City are so different from his former club that you have to give him time to adapt."

OGDEN: "Ideally, you'd extend his contract but I'm told he doesn't want to. He wants the option to end his career elsewhere."

MARCOTTI: "I think that makes sense. He's been there a long time, you have to respect his choices. But at least he's around for another year."

OGDEN: "City paid £12 million for him and he's still 22, but he hasn't scored since being on loan at Celtic two years ago. Somebody should take him; if not, let him go on loan and run out of his contract."

MARCOTTI: "He missed a chunk in the middle of the season at Girona but never established himself as a starter, before or after. Sometimes things don't work out."

VERDICT: Sell if you can. If not, loan

OGDEN: "He had a good season with Marcelo Bielsa at Leeds United, but I'm not sure he's ready for City. Give him another year on loan."

MARCOTTI: "You extend him to preserve his value first and foremost. Otherwise, I agree, send him to a place with a manager that plays football similar to Pep's and let him continue to grow."

Too soon to crown Man City as the best of the Premier League era?

The FC guys mention Manchester United's '99 treble winners and Arsenal's '98 side when questioning if Man City are the best team of the Premier League era.

Like we said at the beginning, there's a fair bit to do here. Unless Bravo proves his fitness, you'll want a reliable veteran back-up keeper. Marcotti is OK with one out of Zinchenko, Mendy, Laporte and Danilo sharing time at left-back, but Ogden wants a first-choice option and is willing to sell Mendy, who might fetch as much as £30m.

You need a top-notch central defender to replace Kompany, possibly two if Otamendi goes. And, perhaps, one should be more experienced. A defensive midfielder must be a priority, too -- ideally someone who can take over from Fernandinho in a year's time and occasionally fill in as a more attacking midfielder too, like Gundogan did. That's important because if David Silva opts to leave, or if age and injuries catch up with him, you're left with just Bernardo Silva, Phil Foden and Kevin De Bruyne, whose own injuries woes are well-chronicled). And, given that this is Manchester City, it needs to be a technically top-notch player.

If, as Ogden wants to do, you cash in on either Sane or Mahrez, then you'll need another wide forward. Or, maybe, you'd need a center-forward, with Jesus deployed wide, if you can get the right guy in and that will give you some cover too for when Aguero's contract starts to wind down.

How much can City spend in net terms? That's difficult to say and it may be influenced by the risk of a Champions League ban or fine down the road. It may be easier to look at what they can potentially raise from sales. Bravo, Roberts and Delph combined may get you £10 million. Gundogan is highly rated but he's 28 and has a single year left. You likely won't get more than £40m. Sane could be in the £80m-plus range but the problem is that once you get to that level, there aren't many buyers. Unless someone is in the market for a player with his skill set, you're a bit stuck.

The good news is that City's net spend last season was a mere £20m. In the two years prior to that, they averaged £180m in net spending per year. You assume they can go as high as £180m, when you factor in sales you get a budget of £230m, maybe a little more since they have an army of youngsters who they can also sell to finance the first team (hands up who thought they'd get £11m for Rabbi Matondo?). It puts them closer to £250m, which becomes well over £300m if -- as Ogden suggests -- they also sell Sane or Mahrez. With that money, they'd need to pick up a starter calibre left-back, central defender, midfielder and forward. Plus a serviceable back-up keeper and possibly another central defender.

Whichever way they go, one thing appears certain. We're nearing the end of a cycle and in 12 months' time, City's starting lineup could look very different.

More in this category: « Ramsey has played last Arsenal match - Emery FIFA scraps plans for 48-team World Cup in 2022 »
back to top