Goalkeepers go to 'dark places' after making a high-profile mistake. How do the pros handle the pressure? 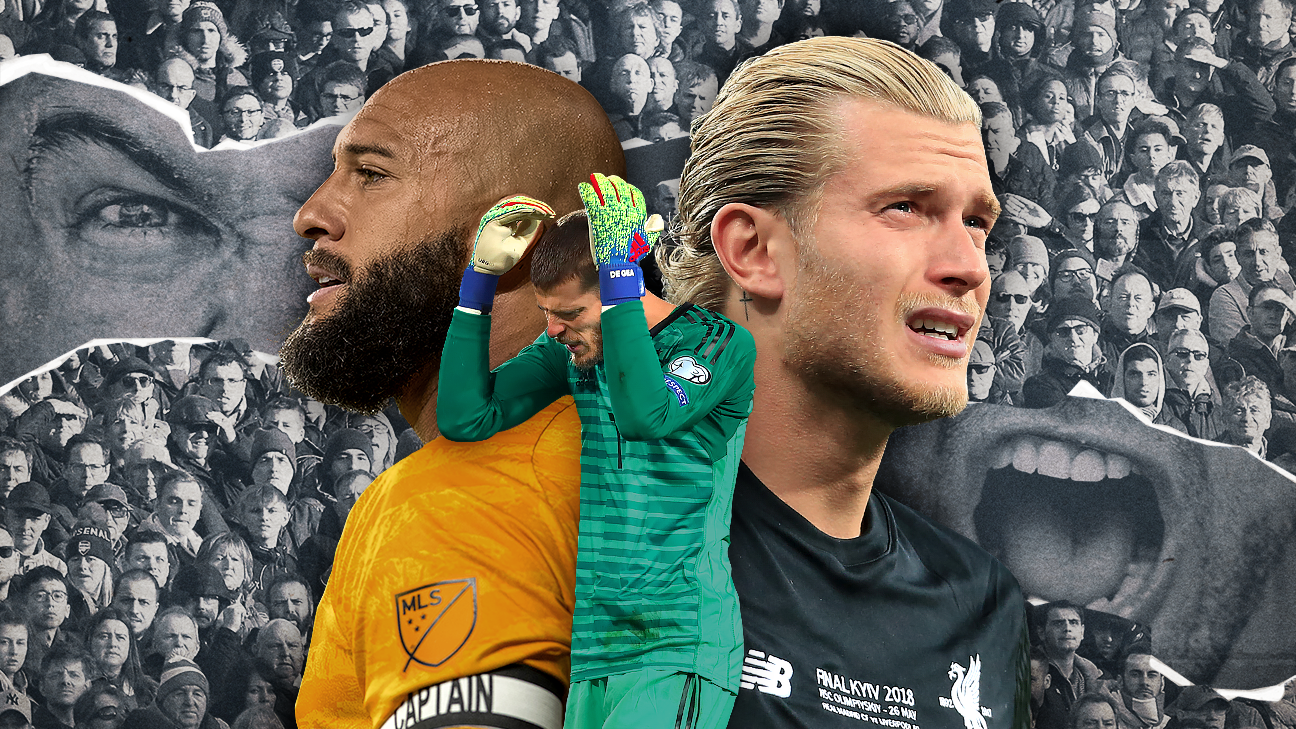 Tim Howard has experienced the highs and lows of goalkeeping, but it's the lows that stick in the memory. "You have to go to some dark places as a goalkeeper," the former United States and Manchester United No. 1 told ESPN FC.

Howard was feted by President Barack Obama and became a national hero after an incredible display during the World Cup defeat against Belgium in 2014, but his failure to hold on to Benni McCarthy's 90th-minute free kick during a Champions League second-round tie with FC Porto 10 years earlier gifted Costinha a decisive goal that knocked United out of the competition and convinced Sir Alex Ferguson that Howard was not up to the job of the club's first-choice keeper.

"In order to be successful in England, you've got to be great for the better part of five to 10 years," Howard said. "I had a great season at Manchester United, and then phew, I didn't see the field for two years, so it's not about having one or two good games."

-- The best 30 players under 21
-- Why Man City are the greatest team of Premier League era
-- Man United Keep or Dump: Who should stay?

Being a goalkeeper is a thankless task, one that requires a certain kind of individual to don the gloves and pull on the No. 1 jersey. You can make 10 incredible saves -- "worldies" in goalkeeper parlance -- and then allow one to slip through your grasp and into the back of the net. Guess what gets remembered?

"In my experience of football, goalkeepers are more invested than outfield players in the psychological side [of the game]. And they need to be," said sports psychologist Dan Abrahams, who has worked with Premier League players and clubs. "They are individuals operating in a team setting, and there are times when their world can cave in if they make a calamitous mistake."

David James made high-profile mistakes during his early days at Liverpool, and once he was nicknamed "Calamity James," it stuck for the remainder of his career. You can only imagine how former France No. 1 Dominique Dropsy -- yes, that's his real name -- would have been treated in today's ferocious, unforgiving world of social media if he accidentally dropped the ball onto the toes of an opposition forward.

David De Gea, Manchester United's No. 1 keeper, knows all about the downside of the position these days. Rated by many as the best in the world, he has had a nightmare run of mistakes between the posts, dating to his unconvincing performances for Spain at last year's World Cup. His error against Chelsea on April 28 proved to be a key moment in United's late-season slide.

Loris Karius has had it even worse than De Gea. The German keeper made two huge mistakes that led directly to goals in Liverpool's 3-1 Champions League final defeat against Real Madrid in Kiev, Ukraine, last year, and even though it transpired that he was suffering from a concussion following a collision with Sergio Ramos earlier in the game, he became the target of merciless criticism.

Jurgen Klopp and Liverpool defended Karius in public at the time, but he hasn't played for the club since: He was shipped out on loan to Besiktas in Turkey, where his battle to rebuild his confidence has been marred by further mistakes. An error on his debut against Bursaspor in September resulted in Besiktas being held to a 1-1 draw, and he made another high-profile mistake to concede a goal during a Europa League defeat against Malmo in October.

But Karius' time in Turkey hit its lowest ebb in March, when after being jeered by fans following a goal conceded against Konyaspor, Besiktas coach Senol Gunes claimed publicly that "something is wrong" with the German.

Mark Bosnich, the former United, Aston Villa and Australia goalkeeper, saw Karius make those errors against Real, and it triggered memories of his young days at Old Trafford from 1989 to 1991 (he had a second stint at the club from 1999 to 2001). "What happened to Karius, it had been coming." Bosnich told ESPN FC. "He had made mistakes in games running up to the final, and you could see he was having a tough time. His manager, Klopp, should have helped him and taken him out of the firing line before that game and allowed him to rebuild his confidence and go again.

"When I was a kid at United, I saw the same happen to Jim Leighton, who was an experienced No. 1. He had a bad run, his confidence dropped, but Alex Ferguson played him in the FA Cup final, and he let in three and was dropped for the replay. Jim never really recovered from that, but sometimes a manager has to spot the problems before a big mistake happens. They have a responsibility to act before it can be too late.

"Ole Gunnar Solskjaer has that decision to make with De Gea," Bosnich said of the United manager. "I believe De Gea can come through this period, but at some point, the manager has to make a decision when a keeper is struggling."

Karius and De Gea have both been in the eye of the storm, but when you are the last line of defence, you need to be able to handle that, right?

"I always wanted to be a goalkeeper as a kid, but I also knew that you had to take the rough with the smooth," Bosnich said. "As a keeper, you have to have that mindset. Whenever I made a mistake, I would just apologise to my teammates in the dressing room and move on. That's how I was.

"My best game for United was against Palmeiras in the Intercontinental Trophy, when we became world champions in 1999, but I was the same after that. No big deal. Move on."

Not all goalkeepers are as mentally tough as Bosnich, however. The Australia international was an extrovert, criticised more for being too confident than for being riddled with self-doubt, while others have sunk after high-profile mistakes.

The England careers of the likes of Rob Green and Scott Carson ended before they properly began, thanks to costly errors in big games for their country. Scrutiny can be intense, especially in an era of all-angle replays, VAR and super-slo-mo analysis, but Howard said staying strong is crucial for every keeper who has, quite literally, dropped the ball. "You have to prepare for some dark days," he said. "You have to be strong, block out the media, the fans and even some of your own teammates when they're looking across the dressing room at you and you know they have no confidence in you.

"That's where I think a lot of goalkeepers get it wrong. I wasn't stupid. I could look in the mirror and say, 'By the way, you haven't been playing very well,' but I never discounted the fact that I belonged there or that I could play."

Ben Foster also experienced the unforgiving spotlight that comes with playing in goal for Manchester United. He, too, fell afoul of Ferguson after one mistake too many. Massimo Taibi and World Cup winner Fabien Barthez went the same way as Leighton, Bosnich, Howard and Foster at Man United. Now Watford's No. 1, Foster said it has taken until his 30s for him to develop the strength of mind to deal with the pitfalls of his profession.

"United was definitely the wrong place at the wrong time for me," Foster said, recalling his time as a young keeper making his way at Old Trafford. "I wasn't equipped mentally to be able to deal with being at United at that time.

The influence of psychologists such as Abrahams points to football learning that goalkeepers need specific help, countering Foster's assertion that the area is overlooked. Abrahams said that coaching a goalkeeper to deal with adversity is the key.

"There are tools and techniques to help keepers cope with making mistakes," Abrahams said. "It's about staying focused, using key trigger words to themselves to control the situation, projecting positive body language and, crucially, not dwelling on the mistake."

Foster agrees, insisting that "if you ever think [about a mistake], that's when you're going to start getting problems."

How do you rebuild a keeper's confidence on Monday morning, after a costly mistake, when he heads out to train?

"Some keepers will want to focus on the mistake and work on it. Others will just want normality and repetition of what they always do," said Ant White, a member of Bournemouth's goalkeeping coach team. "But they have to know their identity, what makes them a top goalkeeper and remain focused on their strengths.

Only De Gea truly knows whether his energy and focus are being drained by his run of mistakes. The same applies to Karius: Does he have nightmares about those two errors in Kiev? Ultimately, all players grapple with mistakes they've made, but it's different for a goalkeeper. They are exposed, in every sense.

"I almost don't see myself as a footballer, you know?" Foster said. "I just try to get in the way of a ball that's going in the back of a net. That's what it comes down to at the end of the day. But you're on your own.

"As a goalie, you're on your own, and you've got a deal with it on your own."

More in this category: « Ramsey has played last Arsenal match - Emery Philadelphia loves its Eagles, Sixers and Phillies. It's time the city embraces the underdog Union, too »
back to top