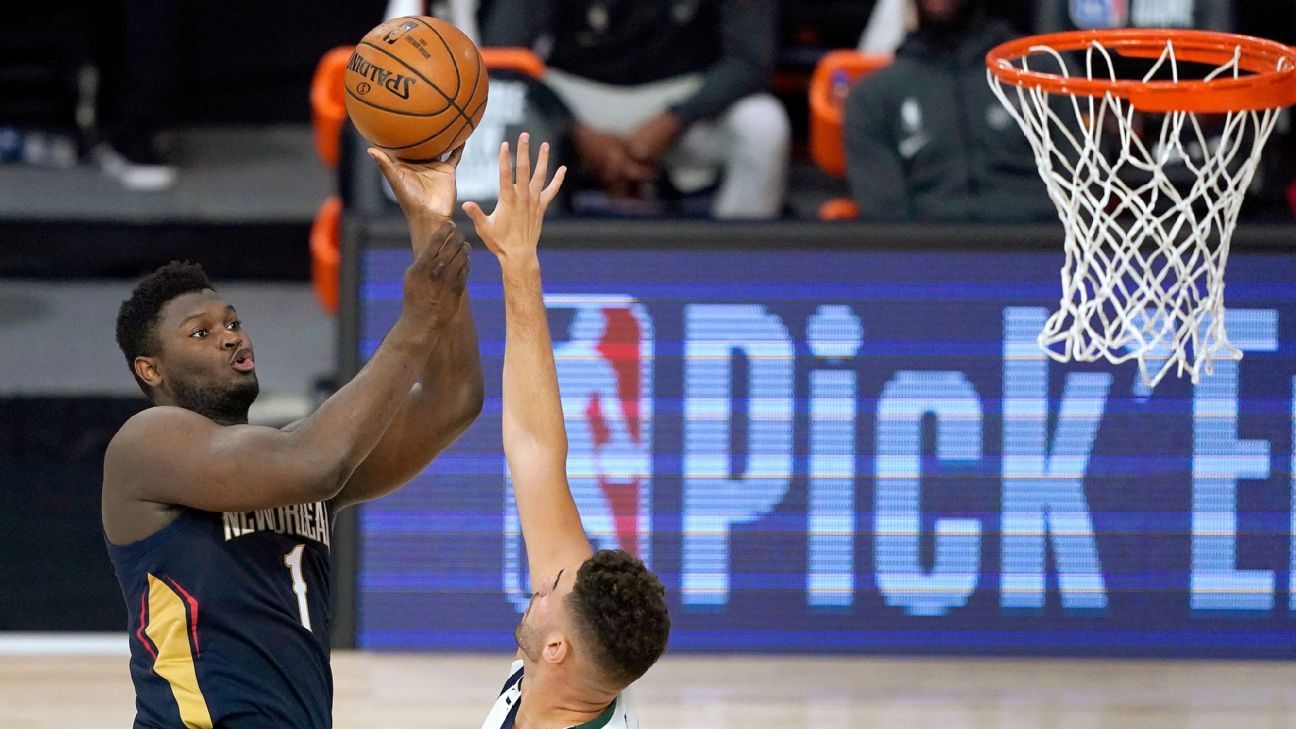 The New Orleans Pelicans watched a chance to get a leg up in the heated race for the West's No. 8 seed fade away while Zion Williamson sat on the bench.

The Pelicans' 16-point lead evaporated as the Utah Jazz stormed back in the second half to come away with a 106-104 win Thursday in the NBA's first game of the restart at ESPN Wide World of Sports Complex at the Walt Disney World Resort.

New Orleans had a chance at a magical ending, but Brandon Ingram's 3-point attempt at the buzzer was off. Ingram caught the ball off the inbounds and dribbled to the right wing. He sized up Utah's Royce O'Neale as Pelicans guard JJ Redick came off a triple screen and took the shot. The ball rolled around the rim but bounced out, securing the win for Utah.

After the shot, Ingram and Redick talked briefly at half court, then Ingram quickly walked off the court and into the back.

Ingram said the shot was something he was working on but said he let his team down on the defensive end. He sent Donovan Mitchell to the line with 48.5 seconds left and failed to grab a defensive rebound that set up the go-ahead free throws by Rudy Gobert.

Pelicans coach Alvin Gentry said there were two options at the end but said the bottom line was he felt Ingram took a great shot and he felt as if the shot was going in. But, he added, thanks to the Pelicans' 20 turnovers, it shouldn't have come down to a potential game winner.

"We let a golden opportunity slip away," Gentry said.

The Pelicans have struggled to close out games all season. New Orleans -- which tied the score at 104 with 32.1 seconds left -- has now lost a league-leading 20 games in which it had the lead or was tied in the final minute of regulation. Turn even a handful of those losses into wins, and the Pelicans could potentially already be in a playoff position in the West.

Instead, Thursday's loss drops them all the way to No. 11, four games behind the No. 8 Memphis Grizzlies, whom they'll face in a critical game Monday night. -- Andrew Lopez

MORE: Here's what we can't wait to watch in the NBA restart

Of course the final contest in the "Battle for L.A." series came down to the final moments.

Paul George nailed consecutive 3-pointers late for the Clippers, the second one with 29 seconds left tied the score at 101. On the next possession, LeBron James followed his own miss down the lane, gathered the rebound and put it back in for the go-ahead basket. The Clippers still had a chance to tie or win the game, but the Lakers' leading man was brilliant on the last defensive possession -- forcing the ball out of Kawhi Leonard's hands and covering George as his 3-point try at the buzzer misfired.

The win was the 50th for the Lakers and evened the season series with their in-arena rivals at 2-2.

While the backs of the uniforms of players such as Alex Caruso ("Black Lives Matter") and Marcus Morris Sr. ("Education Reform") looked different, so, too, did uniforms worn by players who chose to keep their last names rather than swap them out with a social justice message. James' surname appeared below the No. 23 on his gold Lakers jersey, rather than above it. As did Leonard's last name, appearing underneath No. 2 on his white Clippers kit.

The messages being placed above the uniform number, where the player name would typically appear, was requested by players to show that the message is more important than their name, a source with knowledge of the league's plans for the restart told ESPN. For the players who chose no message and just their name, it is placed below for consistency. For the restart, above the number is reserved for messages and below for names.

James struggled to score in his first game back after 141 days off, but the Lakers' star hasn't forgotten how to finish big in traffic.

NBA players are fans, too

Who said NBA games were being played without fans?

With 22 teams in the bubble and only four in action Thursday night, players who had the day off took the opportunity to watch Clippers-Lakers live.

A group of NBA players have arrived about 20 minutes before tipoff to watch Lakers-Clippers and are sitting near midcourt. The group includes Dame Lillard, CJ McCollum, DeMar DeRozan, Carmelo Anthony and a couple others so far.

Lonzo with the alley, Zion with the oop

Before Thursday, Lonzo Ball and Williamson had played only 19 games together, but they formed an instant on-court connection in that short time. Ball averaged 3.0 assists per game to Williamson, the third most for any duo in the NBA. And even though Williamson didn't play in any of the Pelicans' scrimmages, the two didn't show any rust in connecting again.

Zion, Lonzo are back with fabulous alley-oop

Lonzo Ball lobs a backdoor alley-oop to Zion Williamson for the finish.

Williamson was playing in "short bursts" against the Jazz. In his first two stints, lasting a total of seven minutes, he was 4-for-4 from the field for nine points.

Gobert might have scored the first points of the NBA restart, but the Jazz center is still best known for his defense, and he showed why Thursday night.

Rudy Gobert comes across for the strong SWAT! ?#WholeNewGame on TNT pic.twitter.com/v9oiyPuD9b

Unfortunately for Gobert, this block won't help his case to win a third consecutive Defensive Player of the Year Award. The NBA ruled that this year's awards will include only games through March 11, excluding anything that happens in each team's eight seeding games.

Standing along the sideline with the "Black Lives Matter" message in front of them, players, coaches and referees from both games took a knee.

The Jazz and Pelicans kneel together for the national anthem before the NBA bubble restart in Florida.

The Lakers and Clippers kneel for the national anthem in their first game in the Orlando, Florida, bubble.

Getting Williamson back for the start of seeding games, even in limited minutes, is important for the Pelicans' chances of reaching and winning the play-in matchup for the eighth seed in the Western Conference. While New Orleans will have an opportunity to face Memphis (the current eighth seed) in the third game, these first two will make a substantial difference in their playoff odds.

In my simulations of the seeding games, the Pelicans reach the playoffs 41% of the time when they split their first two games, but that drops to just 19% when they start 0-2.

New Orleans has had success without Zion this season so long as Derrick Favors is in the lineup. The Pelicans are 12-13 when Favors plays and Williamson does not, as compared to 6-14 with both big men unavailable. Still, New Orleans is undoubtedly at its best with Zion, and even "short bursts" of playing time from him will be a boon for the Pelicans. -- Kevin Pelton

Rockets guard Eric Gordon lands awkwardly on his left foot while making a pass and needs help from teammates to get off of the court.

Game day 'fits are back!

When the NBA first announced its bubble protocols, it was unclear if players would be forced to dress at the hotels and arrive for games in uniform. Then the league said players would in fact be able to dress at the arena, keeping the growing trend of "arrival runways" in play. And with the first official games of the NBA restart, we can confirm that players can still arrive in style.

LeBron and Kawhi arrive for their first NBA restart game in the bubble ?

James and Leonard were both wearing masks, as per NBA protocol, and also both wearing shorts -- because it's the middle of summer in Orlando and the high temperature Thursday was 93 degrees.

The Pelicans' loss to the Jazz puts them four games back of the Grizzlies for the 8-seed in the West. New Orleans is now in 11th place behind the Trail Blazers and the Kings. As a reminder, the winning percentage matters, as that will determine who is able qualify for a play-in round.

The Bucks enter the restart 6.5 games up on the Raptors for the top seed in the East, meaning Milwaukee doesn't have much to play for. Still, these next eight games will give Mike Budenholzer's squad a chance to warm up for the playoffs. It's hard to remember now, but the Bucks went into the hiatus in something of a slump, having lost four of five games to fall off a 70-win pace. But Giannis Antetokounmpo was banged up then. The reigning and likely repeat MVP is healthy and ready to go.

The Rockets' small-ball experiment remains one of the most fascinating storylines to watch in the bubble. Houston has only two players taller than 6-foot-8 on its roster and those two -- Tyson Chandler and Bruno Caboclo -- have combined to play only 31 games for the Rockets this season. Houston saw some early success with its small lineup, but had lost four of five before the season was suspended. Two of those losses came without Eric Gordon, who could miss the next two weeks after spraining his ankle in the Rockets' final scrimmage.

NBA Continuity Rankings: Which teams hold the edge in the bubble?

Teams are adapting to the bubble. Those who don't have to adjust between the lines could have a distinct advantage.

Key games, playoff races and title contenders in the restart

How will every race play out? We run the simulations, crunch the numbers and hone in on the most important games to watch.

Will LeBron get title No. 4? Will he be foiled by his Staples Center rivals? Or will Giannis & Co. finally break through?