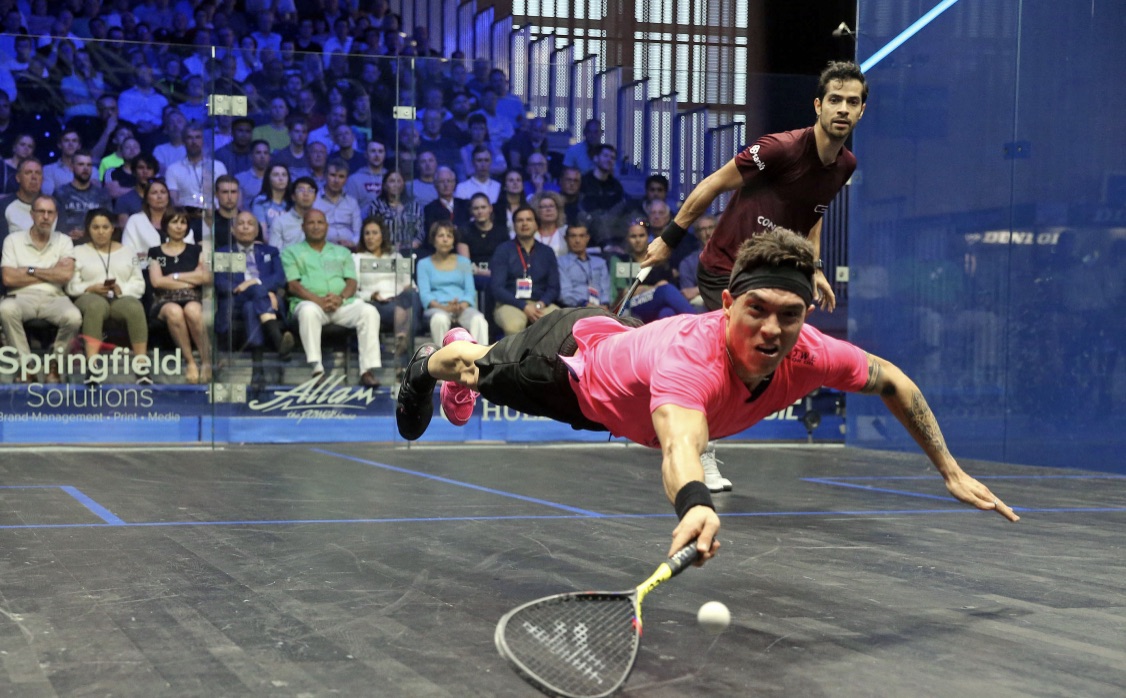 Miguel Rodriguez dives across the court

The quarter-finals of the men’s 2019 Allam British Open will see Colombia’s World No.7 Miguel Rodriguez and Egypt’s World No.2 Mohamed ElShorbagy go head-to-head in a repeat of last year’s blockbuster title decider after both players secured round three wins at Hull’s Allam Sport Centre earlier today.

Rodriguez overcame ElShorbagy in a thrilling 102-minute final last May as he became the first South American in history – and the first unseeded player of the modern era – to win the iconic PSA Platinum tournament, which is the longest-running event in squash.

The 33-year-old from Bogota booked his place in the quarter-finals of this year’s British Open as he prevailed in a captivating four-game battle with Mexico’s Cesar Salazar, winning 11-8, 10-12, 11-6, 11-8 in 61 minutes.

“It was like an exhibition match,” said Bogota-born Rodriguez. “This is our kind of Latin style. We know each other’s game, he is very talented, and he is a top 10-15 player when he is at his best. I think maybe the experience paid off at the end. We are good friends on and off court, it was a great match and is maybe the squash we should play every day. I’m very grateful and happy to win this match.

“This is a special tournament for me. Last year I won my biggest title here in Hull and I’m taking it one match at a time and will enjoy my match tomorrow again.”

ElShorbagy, a British Open champion in 2015 and 2016, ended English interest in the men’s draw as he followed up a second round win over three-time runner-up James Willstrop with a 3-0 victory against World No.20 Daryl Selby.

The 28-year-old from Alexandria had won seven of their nine previous matches on the PSA Tour and put in an extremely accurate performance to record an 11-3, 11-4, 11-2 win in just 22 minutes. ElShorbagy and Rodriguez will meet for the fourth time this season, with the Egyptian winning all three.

“Both of us had a great battle last year. I was very disappointed to lose, but at the same time he was a great winner,” said ElShorbagy of last year’s defeat to Rodriguez.

“We are really good friends, and his mum and my mum are actually hanging out with each other in Alexandria right now. Even the families are good friends with each other, so I was happy for him last year. We have met four times already this season, and I’m sure this one will be another great one.”

World No.4 Karim Abdel Gawad and World No.5 Simon Rösner will do battle in the quarter-finals after respective wins over Egyptian duo Zahed Salem and Omar Mosaad.

The women’s draw will feature a Belgian quarter-finalist for the first time after World No.24 Nele Gilis defeated younger sister Tinne 3-1 to book a place in her maiden last eight berth at a Platinum tournament.

The Mol-born sisters were meeting for the third time on the PSA Tour – with 23-year-old Nele winning both of their previous matches – but it was the first time they were competing against each other on the glass show court.

Nele, who is two years Tinne’s senior and ranked 15 places above her in the PSA World Rankings, won 11-2, 11-9, 11-13, 11-3 in 54 minutes to set up a match with France’s World No.4 Camille Serme in the last eight. “We’ve played each other many times over the years but never on an occasion like this, it’s a very special day for both of us to play here at one of the biggest events,” said Nele (right in the picture).

“I’m so proud of my sister for how she did, it was so tough on me, but I’m so happy that I got through. I’m so excited [for the quarter-finals], I’ve been watching this tournament from when I was a little girl, when I could only dream of competing at the British Open. To be in the quarter-finals, I’m speechless.”

Serme, the 2015 British Open champion, defeated Welsh No.1 Tesni Evans 11-8, 11-5, 11-13, 11-5 to reach the last eight, while England No.1 Sarah-Jane Perry will join Gilis and Serme in the last eight after beating India’s Joshna Chinappa in four games.

“You could see that anything loose she was putting away, so I had to be really disciplined. Unfortunately, at the start of the second, I lost that discipline and she played some really good squash. I had to fight back and find a way back into the match, which I did, so I’m really pleased.”

She will clash with defending women’s champion El Sherbini for a place in the semi-finals, with El Sherbini defeating Perry’s compatriot Victoria Lust 3-0 in 22 minutes. Perry beat El Sherbini in the quarter-finals of the Hong Kong Open in November, but required elbow surgery after the tournament, which put her out of action for three months.