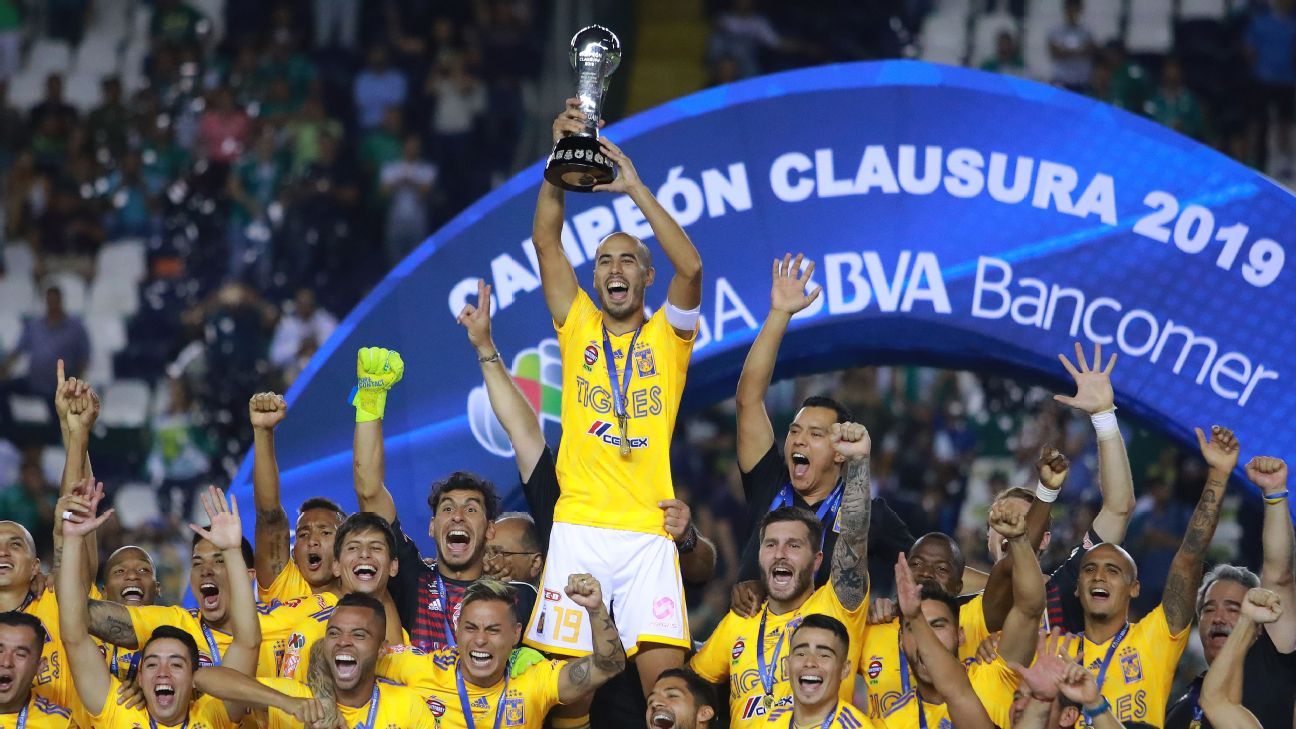 Tigres lifted their seventh Liga MX title on Sunday, overcoming Leon 1-0 on aggregate after a 0-0 tie in the second leg in Estadio Leon.

A solitary goal from Andre-Pierre Gignac in the first leg was enough to give Tigres the 2019 Clausura championship, although they had to rely on keeper Nahuel Guzman making two smart saves in the last 10 minutes to keep Leon from scoring.

The title was Tigres' fifth this decade, continuing the northern Mexican club's period of recent success in the league.

Leon flew at Tigres from the kick-off and came close twice in the early minutes, first through Joel Campbell and then when a mis-timed shot from Luis Montes was fumbled by Guzman, with the ball falling the wrong side of the post for Leon.

Tigres gradually established a foothold in the game, mainly through counter-attacks with Leon pushing forward, but didn't manage a shot on target in the first half.

Leon's cause wasn't helped when Angel Mena, who recorded 14 goals in the regular season, has forced off with an into in the 32nd, to be replaced by Jean Meneses.

This was a rare occasion in which Tigres didn't have the majority of possession in a Liga MX game and the away team was made to suffer in the second half, as fans inside Estadio Leon willed their team to attack.

Costa Rica international Joel Campbell sent a shot from outside the area just wide in the 52nd, with Yairo Moreno and William Tesillo clashing into each other from a Meneses cross from the right wing on the hour mark.

But Tigres also had opportunities on the counter-attack, with Chile international Eduardo Vargas and then Enner Valencia failing to convert in the second half after going through on goal.

Leon center-back Andres Mosquera was sent off for a late challenge in second half injury-time.

Tigres head coach Ricardo Ferretti won his seventh title in Liga MX to pull him level on seven titles with Ignacio Trelles, who managed between 1951 and 1991, the same year Ferretti took his first head coaching job at Pumas.

Leon had won 14 of its 17 games in the regular season, including a historic streak of 12 victories, and was looking to win its eighth Liga MX title.

More in this category: « Ramsey has played last Arsenal match - Emery Pochettino: No future talk until after UCL final »
back to top