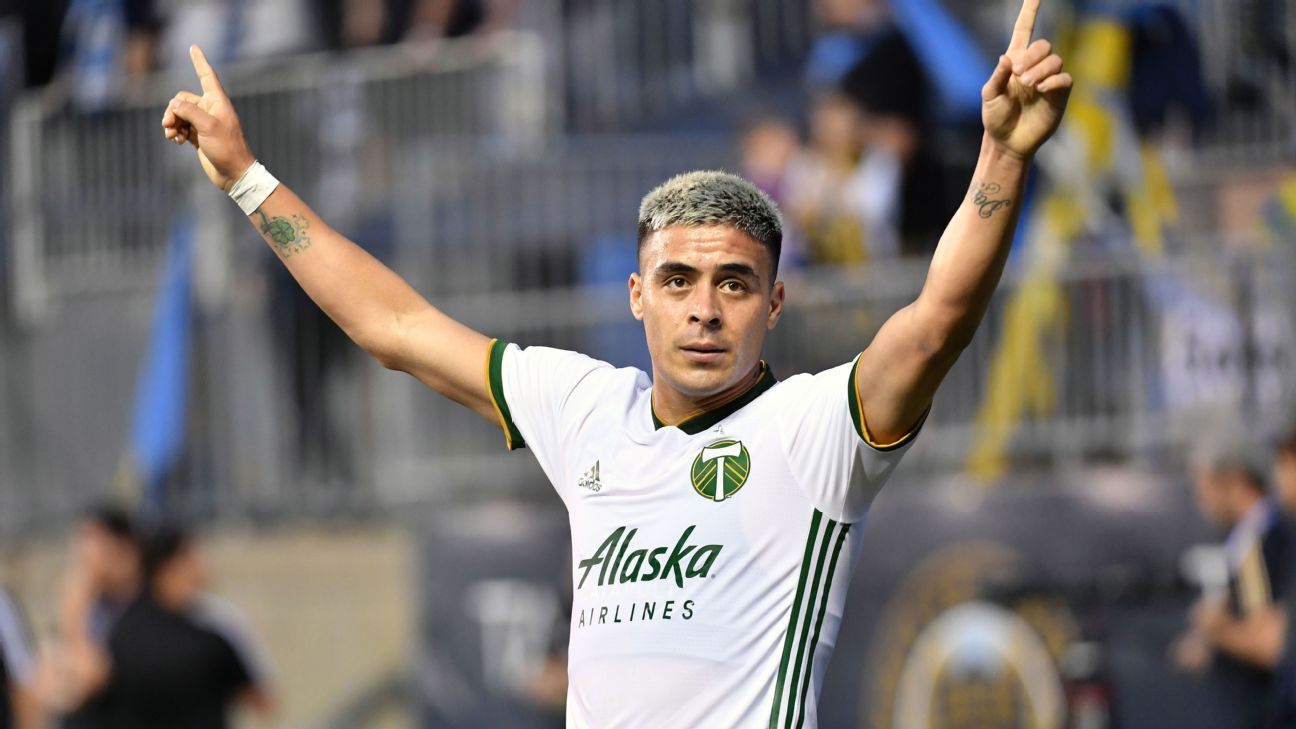 It was quite the week for most of the top five teams in the Power Rankings, with three sides going down in defeat, but losing very little ground.

Of note were the big climbs from the New York Red Bulls and Portland Timbers. Just when everyone is ready to write off the Red Bulls, they string together three wins and a draw in their last four matches, including a 2-0 win in Cincinnati after a midweek duel with Vancouver. The more things change in Harrison, NJ, the more they stay the same.

The Timbers sent a clear message to the rest of their league on Saturday in a 3-1 win at Eastern Conference leaders Philadelphia Union. New arrival Brian Fernandez is here, and he's ready to punish any mistakes. In MLS, those defensive miscues are aplenty, which bodes well for the Argentine.

LAFC at home: Carlos Vela scores, Carlos Vela has an assist, LAFC win in dominating fashion. This time it was the Montreal Impact getting the lather, rise and repeat treatment in the City of Angels in a 4-2 final for the hosts. You knew it was going to be a good night for LAFC when Christian Ramirez scored on this howler.

The Sounders endured a defensive nightmare in Sunday 3-2 loss at Sporting Kansas City, at times rolling out the red carpet for Johnny Russell to get his hat trick. It was a performance that evoked memories of last month's 4-1 loss at LAFC. That said, they never threw in the towel and could have come away with a point.

In Saturday's 1-0 loss at Minnesota United, Dynamo fans got a small glimpse of what life could be like without Alberth Elis, should the Honduran leave this summer for a move abroad. Elis was out with a concussion and the Houston attack was not its usual potent self. There were chances to pull level, only for some wayward finishing proving costly.

Are the Galaxy back? Well, Friday's 1-0 win at Orlando City SC was definitely a step in the right direction, and winning without Zlatan Ibrahimovic always has to be considered a positive. Most importantly though, was that Guillermo Barros Schelotto's defense returned to its stingy ways in recording a clean sheet, thanks in part to a penalty save from goalkeeper David Bingham.

Saturday's 3-1 home loss to Portland is one that Union boss Jim Curtin will want to forget. Usually, center backs Jack Elliot and Auston Trusty as so good on the Philadelphia back line, but they were each gutted by a rampaging Timbers attack. This is arguably the first real sign of adversity for the Union in 2019.

There are some worrisome signs there for DC United following the 1-1 draw at New England on Saturday. Ben Olsen's team are now winless in their last three and the attack is not firing like it was earlier in the season. Nevertheless, a late Wayne Rooney penalty was enough to nudge them to the top of the Eastern Conference standings.

Getting a 1-1 draw in Chicago on Saturday was a satisfactory result for NYCFC, who are now unbeaten in their last eight. Alexandru Mitrita announced his return from injury with a strong goal, and if the trio of Mitrita, Heber and Maxi Moralez can start getting a string of games together, NYCFC could make a move upward.

Well, well, well, look who is back in the mix. The New York Red Bulls are playing their best soccer of the season and pocketed another victory, this time a 2-0 win at Cincinnati after a midweek affair with Vancouver that ended in a tie. Remember when Thierry Henry was rumored to replace Chris Armas? Seems like a lifetime ago. Armas has righted the ship.

It was one of those days that FC Dallas would like to forget, as they coughed up two goals in the first half in a 2-1 loss at Vancouver on Saturday. Both were preventable, but once behind by two, FC Dallas' lack of offensive firepower reared its head.

While Toronto FC certainly missed the cutting edge offered in attack by Alejandro Pozuelo in Sunday's 2-1 home loss to San Jose, that does not excuse the TFC defense from failing to mark the scorching hot Chris Wondolowski not once but twice in the area. TFC could have and maybe should have won this, but a pair of lapses left them empty-handed.

Wondolowski delivers for Quakes in Toronto

Chris Wondolowski found the net twice, as the San Jose Earthquakes came back from a goal down to secure a 2-1 victory over Toronto.

Evan Bush's horrific mistake to gift LAFC an early goal set the tone in Friday's 4-2 loss at LAFC. The Canadians were never really in this one, and truth be told Ignacio Piatti still does not look 100 percent.

Minnesota frankly should have scored more than one goal in Saturday's 1-0 home win over Houston, but a clean sheet will never fail to disappoint head coach Adrian Heath. Darwin Quintero has gone six games without a goal, but he showed on Saturday that he's too good for that to last much longer.

Real Salt Lake gave Atlanta fits in Friday's 2-1 win at home, and the fact that they were tied 1-1 into the final second would have been a harsh result. However, the football gods were smiling on RSL and Jefferson Savarino. The Venezuelan hit an absolute rocket to beat the champs. Sebastian Saucedo's opener wasn't too bad either.

Buckle up, because here comes Portland. The Timbers have completed their 12-game road trip to open the season and have emerged in decent shape. They sent a message to the entire league in Saturday's 3-1 win in Philadelphia about what is coming down the pipe. New striker Fernandez already has three goals in less than three halves of play. This team is ready to fly.

While Atlanta were mere seconds away from getting a road point until the Savarino winner, their performance was largely poor. Passes were misplayed and sprayed everywhere, gestures of discontent all over the field. Bad body language all around. No one fears them anymore.

The schedule has been unkind to Vancouver and you could forgive them if they wanted to settle for a home draw against FC Dallas after a midweek trip to take on the Red Bulls, but credit the Whitecaps for getting a 2-1 win over the Texans. A good sign to see Ali Adnan and Lucas Venuto get on the scoresheet.

Whatever Chris Wondolowski is having for breakfast, we want some of that. The league's all-time leading scorer now has an astounding six goals in his last two games after a brace in Sunday's 2-1 win at Toronto FC. The Wondo-Cristian Espinoza duo is suddenly a thing. The Argentine was so good at picking out Wondo on both goals.

When the league's worst team guts you for three goals, that's not a good thing, but that's what happened to Columbus in a 3-2 loss in Colorado. Even with the two goals on Saturday, the Crew's offense is still anemic at best, with just 14 goals on the season. Caleb Porter will have to hope that Gyasi Zardes' goal will provide a confidence boost.

The story this season with Sporting Kansas City has been their long list of injuries, but Peter Vermes' men sparked to life in Sunday's 3-2 win over Seattle. Johnny Russell had such a great start to the season and Sunday's hat trick might be a sign that things are turning around.

It was business as usual for the Fire at home, putting in a fairly good shift in a 1-1 draw with NYCFC. The problem for Veljko Paunovic is that his team is unable to create the same opportunities away from home, where they are still winless.

Alexandru Mitrita's leveler ensured NYCFC wouldn't add another game to the loss column, as they tied the Chicago Fire 1-1 on the road.

After posting a five-spot last Sunday against Cincinnati in what fans hoped would be the catalyst for a scoring spark, Orlando's woeful finishing was back on display in Friday's 1-0 loss to the Galaxy. Even a penalty kick from someone as seasoned as Nani could not even yield a goal.

The Revs continue to look better each time they take the field since Brad Friedel's departure and they were good value in Saturday's 1-1 home draw with DC United, limiting Rooney & Co. It's an improved team and things stand to be better when new boss Bruce Arena will finally be on the sidelines next week.

For a good chunk of Saturday's clash with the New York Red Bulls, it looked like Cincinnati might gut out a point, but alas the dam burst late with two late goals for the visitors in a 2-0 loss. Eleven goals in 14 games is a painful reality.

Break up the Rapids! Colorado has won two in a row after beating Columbus 3-2 on Saturday. It's not enough to pull them out of the Power Rankings cellar, but there is a proof of life under Conor Casey in the Mile High City. Jonathan Lewis has been a nice fit, too.