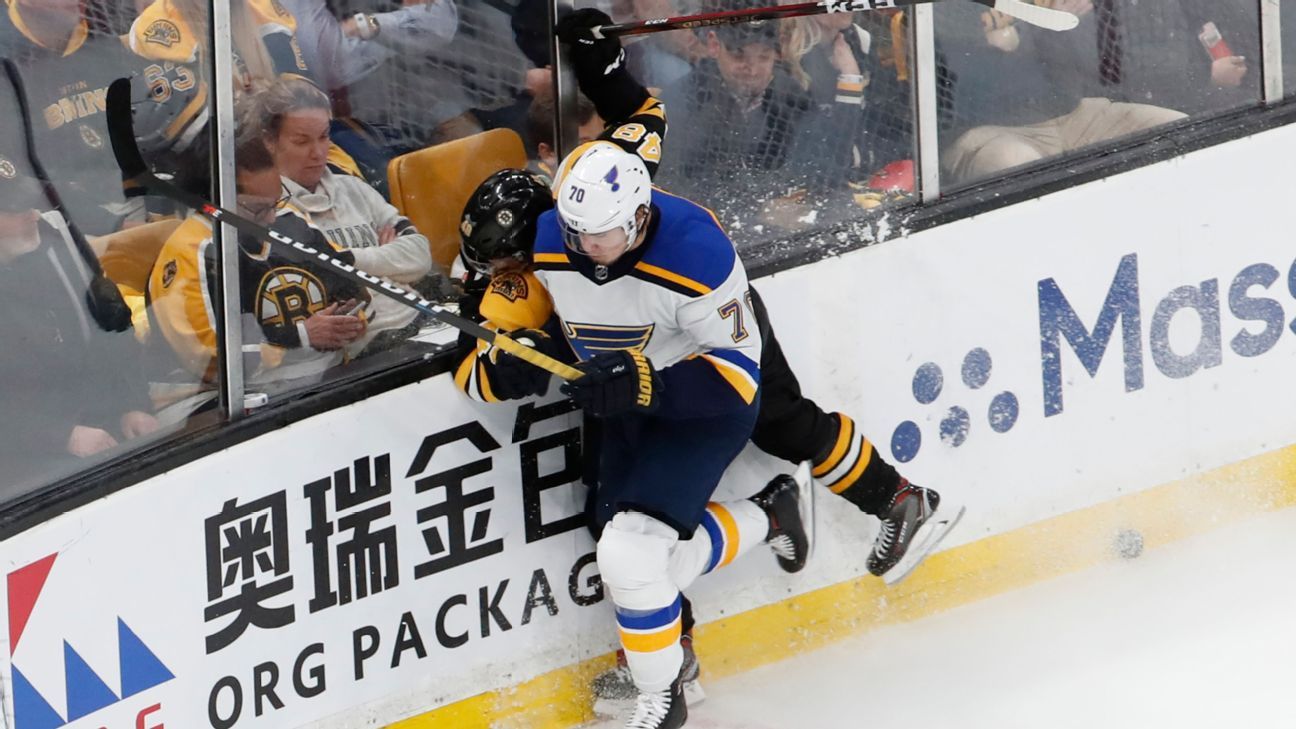 BOSTON -- Bruins defenseman Matt Grzelcyk was sent to the hospital for further evaluation after being hit hard into the boards by St. Louis Blues forward Oskar Sundqvist in the first period of Game 2 of the Stanley Cup Final on Wednesday night.

Bruins coach Bruce Cassidy did not have an immediate update after the game but was hopeful Grzelcyk would be available for Game 3, which will be staged Saturday in St. Louis.

The Blues defeated the Bruins 3-2 in overtime to tie the series at one game apiece.

Grzelcyk was collecting a puck along the boards behind Boston's net when he seemed to lose balance. That's when Sundqvist skated in for a check. Grzelcyk's head slammed into the glass and he fell down, holding his head. The defenseman laid on the ice for several minutes. He needed to be helped off the ice by trainers. Boston played the remainder of the game with only five defenseman.

When asked about the hit after the game, Sundqvist said he had no comment.

Some Bruins teammates took umbrage to the hit.

"I don't think that's a hit we want in our game," said Boston forward David Backes. "It's from behind, elevated, into his head, into the glass. If that's a two-minute penalty, I think there's going to be a shortage of defensemen in this series by the end of it. That's in somebody else's hands.

"That's something I think if I'm making that hit, I'm probably watching from the bleachers for a few, but we'll see what happens with their player."

Bruins defenseman Brandon Carlo said he would have to watch the play again, but he "definitely didn't like it."

"I thought he might have left his feet a little bit, got his head as pretty much for the primary contact," Carlo said. "So we'll see where it goes from there."

"It was a hit from behind, that's what was called," the coach said. "His head got driven into the glass."

More than anything else, Cassidy was upset about losing a defenseman who has been an important part of Boston's postseason run.

"Losing the 15 to 16 minutes of Grizz's time, he's a good puck mover and a guy that can break down a forecheck when he's on," Cassidy said. "[The forecheck] was a strength of theirs tonight and a weakness of ours, breaking pucks out. He's good at the big escape more and the big clean pass to get our forwards moving. We lost some of that element."