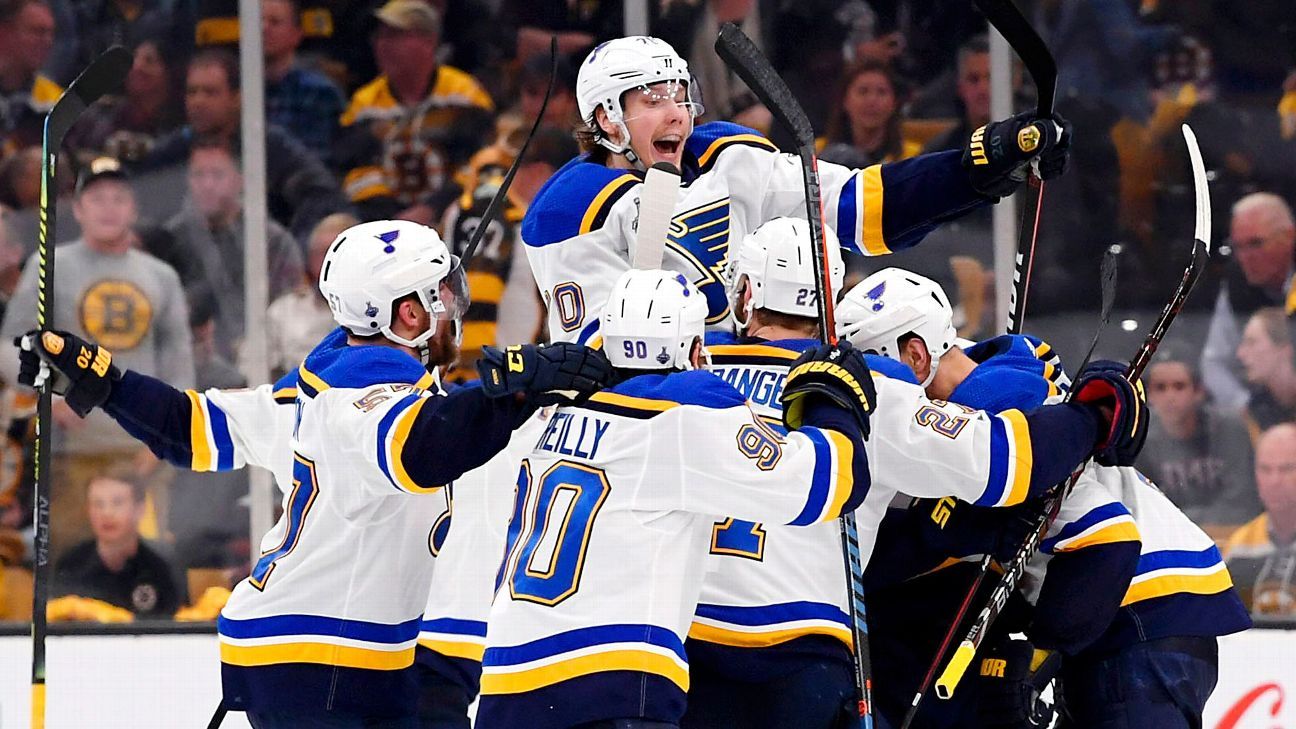 It was a win more than a half-century in the making. The St. Louis Blues defeated the Boston Bruins 3-2 in overtime to take Game 2, but most importantly, win the franchise's first-ever Stanley Cup Final game.

Here's everything you need to know about how Game 2 played out in this edition of ESPN Stanley Cup Playoffs Daily.

The first period was a little nutty. Hometown favorite Charlie Coyle scored first -- on the power play -- before Robert Bortuzzo tied it. Fourth-liner Joakim Nordstrom gave Boston another lead before Vladimir Tarasenko evened things up again. Things calmed down offensively in the second and third (especially for the Bruins, who had a hard time sustaining any offensive zone pressure), but the tone was set. This was a heavy game. This was a physical game. This is likely how the series is going to be won.

The Bruins played most of the game with five defensemen after Matt Grzelcyk was sent to the hospital after hitting his head into the boards on a check by Oskar Sundqvist. That likely led to fatigue. In the end, Carl Gunnarsson won it in overtime for the Blues, becoming the 19th St. Louis player to score this postseason. But what will make Gunnarsson the stuff of legend is how he did it. After clanging one off of the post late in the third period, Gunnarsson took a bathroom break during intermission. That's when he stood next to his coach at the urinal and declared: "I just need one more chance."

1. Carl Gunnarsson, D, St. Louis Blues. Gunnarsson became only the third player in NHL history to score his first playoff goal in a Stanley Cup Final overtime game. It also was his first multipoint game since Oct. 18, 2015 -- a string of 253 games.

Carl Gunnarsson one-times Ryan O'Reilly's pass into the back of the net in overtime, giving the Blues a 3-2 win to even the Stanley Cup Final at 1-1.

2. Joakim Nordstrom, C, Boston Bruins. The fourth-liner and defensive specialist was exceptional Wednesday night, but will need some significant time in the ice bath to recover. Besides his one goal, Nordstrom blocked five shots, including three in a 50-second span on the penalty kill, which roused the Bruins faithful at TD Garden.

3. Vladimir Tarasenko, RW, St. Louis Blues. With another goal on Wednesday, the Russian winger became the fourth player in franchise history to record an eight-game point streak in the postseason. He sits one game shy of the all-time mark held by Tony Currie from 1981.

The shot off the post that laid the groundwork for overtime dramatics.

It's not all positive for St. Louis in analyzing Game 2. The Blues vowed to be more disciplined after uncharacteristically taking five penalties in Game 1. Well, they ended up short-handed five times again, including becoming the first team with multiple goalie interference penalties in a Stanley Cup Final game since 2008.

We have a lot of questions, unknown fans.

"[Craig Berube] just came in and said, 'Good job,' and told the story ... you don't hear that story very often. That's not a place to have a conversation, but I guess it works. It's a good story. I don't know if he's making it up, because that's a great story." -- Alex Pietrangelo on how the team learned of the bathroom convo between Berube and Gunnarsson