Welcome to a golden age of American hockey talent 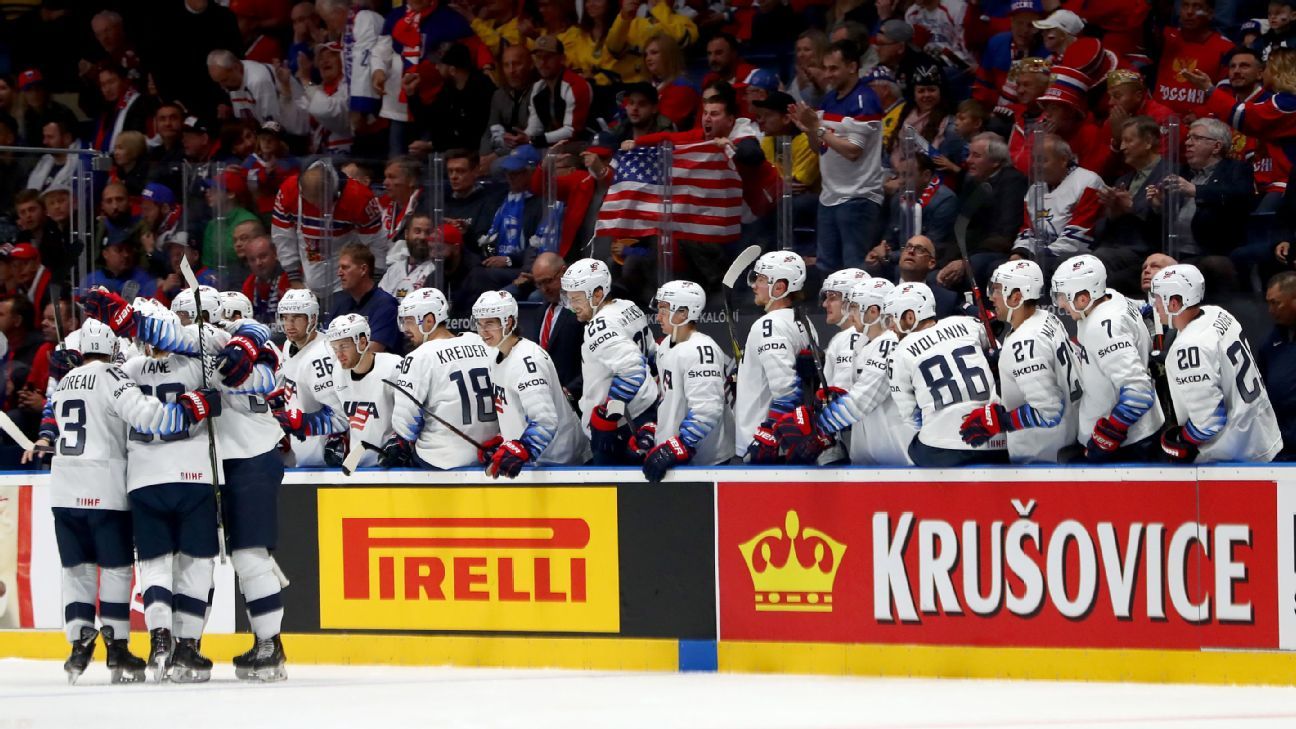 As Charlie McAvoy broke into the St. Louis Blues' zone and put a shot past Jordan Binnington to tie Game 1 of the Stanley Cup Final, the cheers from Boston were probably echoed 2,000 miles away at USA Hockey's offices in Colorado Springs, Colorado. McAvoy was one of three American-born players to score big goals in Game 1 for the Bruins.

Those cheers will continue next month when Jack Hughes and a cavalcade of top American prospects will likely be selected early in the first round of the 2019 NHL draft. Like McAvoy and the other exceptional U.S.-born players born in 1997, the 2001 birth-year class may be just as good if not better. Collectively, the two groups very well could comprise the core of American hockey's future.

There are at least 10 American players widely projected to be selected in the first round this June, which would rival the record of 12 set in 2016, a class led by Auston Matthews. And the 2019 class could be extremely top heavy. With Hughes projected to go No. 1 to the New Jersey Devils, four of his USA Hockey's National Team Development Program teammates -- Alex Turcotte, Trevor Zegras, Cole Caufield and Matthew Boldy -- could each also go in the top 10. That would represent the highest number of American-born players selected in the top 10 in draft history. Additionally, the No. 1-ranked goaltender in the draft class, Connecticut native Spencer Knight, comes from this U.S. group.

As the number of U.S.-born players across the NHL increases, the quality has as well. Suddenly, USA Hockey has a new core of players, largely homegrown and trained in their national team program, coming up while winning World U18 and World Junior Championships and then finding fast success in the NHL.

That 1997-born class has made a near-immediate impact in the league. It includes 10 first-rounders selected over the 2015 and 2016 drafts. All but Brock Boeser were alumni of the National Team Development Program (NTDP). At various points, that 1997-born team included Matthews, Matthew Tkachuk, Zach Werenski, Noah Hanifin, McAvoy, Jack Roslovic, Christian Fischer, Jordan Greenway, Troy Terry, Tage Thompson, Luke Kunin, Caleb Jones and Colin White, all of whom played NHL games this season.

Of the top Americans in the NHL since 2016, four of those players -- Matthews, Boeser, Alex DeBrincat and Tkachuk -- are among the top 15 in points per game played. Matthews is also the top goal scorer among Americans over the past three seasons with 111 and is inching his way toward becoming the new face of USA Hockey, albeit from Canada's biggest market.

Peter Ward was in charge of scouting and recruiting the '97 birth year for the NTDP as the organization's director of player of personnel at the time. Now an amateur scout with the Vegas Golden Knights, he was able to see the growth of this group up close and personal, but it was evident early on that there was something special there.

"The core, we knew it would be good," Ward said. "[Matthews] first popped on my scene at 13 and then I just kind of kept tabs on him. At 13, you don't know. We brought him out at Christmas time to skate with the 1995's and he was blowing by guys two years older than him. [Then head coach] Don Granato says offer him now right after that practice."

Matthews was the first player to commit, and the rest started to fall in line. One of the last players to even be invited to camp was actually McAvoy.

"Our area scout went and saw him, and he kept on telling me you gotta keep an eye on this kid," Ward recalled, admitting he nearly made an egregious error in not including him. "I thought he was good, [but] didn't have a lot of size at the time. We got him into camp. He was the last add. Once we got him there, Don said, 'We gotta take that kid.'"

In the years since, McAvoy has become a first-round pick and top-pairing defenseman in the NHL, won a World Junior gold medal for USA Hockey in 2017 and has represented the U.S. at multiple world championships.

In all, 21 players who spent either the first, second or both years at the NTDP from the 1997 birth year were drafted. More than half of them have already played in the NHL.

But there is some belief that this year's NTDP team could have as many, or more, players selected over the next two drafts.

"One of the most important factors at the NTDP is that we don't make mistakes and we have a class that's well-rounded that pushes from the bottom to the middle, and from the middle to the top," said John Wroblewski, who coached the 2001 birth-year players at the NTDP. "Jeremiah Crowe [then player personnel director and now a pro scout with the Buffalo Sabres] did a fantastic job putting this team together."

Wroblewski noted that the most skilled players would be challenged by the ones who were more defensively sound, and vice versa. And the team also includes two exceptional goalies.

"Steel forges steel," Wroblewski said. "I like to use Zegras and Hughes as a microcosm of the group. Trevor doesn't become who he is without chasing Jack. I don't think Jack gets there without Trevor pushing him. I think it encompasses this class and what we're trying to do."

The players noticed the benefits, too.

"When you see anyone on your team do something well, you want to show that yourself too," said Turcotte, who is projected to be a top-five pick. "It gets everyone to work harder. When you see your teammates succeed, you're happy for them, but you want to do the same thing."

"Every kid that comes down in practice, there's something special they can do," says Knight, the only goaltender currently projected to be a first-round pick this year. "There's no shot off. We're competitive and we just make each other better."

Even outside of the NTDP, this year's American-born prospects are something to behold. Arthur Kaliyev had 51 goals for the Hamilton Bulldogs in the OHL this year. Bobby Brink had the most productive season in the USHL by a non-NTDP player since Thomas Vanek in 2001-02 with an average of 1.58 points per game. Nicholas Robertson was a standout performer at the Hlinka-Gretzky Cup and a leading player for the Peterborough Petes. And Everett Silvertips goaltender Dustin Wolf is one of the more highly-regarded goaltenders in the draft class having posted a .930 save percentage after replacing budding young Philadelphia Flyers star Carter Hart this season.

While these two birth years have a higher concentration of elite players than some of the surrounding years, USA Hockey will continue to lean on 1994-born Seth Jones and Jacob Trouba, 1996-born Jack Eichel and Dylan Larkin, 1999-born Quinn Hughes and of course the 1988-born Patrick Kane as it builds national teams.

There is an undeniable truth in the progress of the American player, becoming more skilled, more creative and more entertaining than the years and years of north-south speedy, grindy players. The elites were fewer and farther in between.

Part of that trend may be thanks to the changing culture in American player development, and specifically USA Hockey's American Development Model (ADM). It puts a greater emphasis on skill development at the grassroots level by providing guidance on practice and game structure for the younger levels. The adoption of long-term athlete development principles, heavy doses of research and borrowing from other sports and countries' development structure has been key.

It has been nine years since that model was put into place, so the 2001 birth-year players have essentially grown up with this system, even if they didn't necessarily realize it.

Ken Martel, the technical director of the ADM, says it would be hard for the program to take much credit for the development of this exceptional group, but notes that the winds of change are blowing throughout the country when it comes to philosophies on how to help players reach new heights.

"There's been a cultural shift in how we're operating at the youth level that the ADM has pushed," Martel said. "Nothing we've done is rocket science. It's not anything that people hadn't done before. We just didn't do enough of it."

A larger focus of the ADM is to encourage less formulaic and structured practices to help foster creativity and hockey sense. There has also been a push for more practices and fewer games at the younger levels, encouraging more puck touches on a weekly basis. At the youngest levels, there has been movement to shrink the playing area to cross-ice or half-ice competitions to make the surface more age-appropriate and allow players more opportunities to be close to the puck.

While there is a desire to create better players, one of the more important things the ADM has aimed to do with these changes is to foster retention. There is evidence it's actually working, as USA Hockey has posted positive retention in each of the past two years. As more kids stay in the game longer, the talent pools become deeper.

"We see draft classes like [the 2019 crop] and we wonder what can the future hold," Martel said. "This is special. This is not normal. Every country goes through some cycles."

It seems the past few years have been an acceleration of a larger trend over the past few decades. In 2018-19, 28.6 percent of the players who played in an NHL game were U.S. born, according to QuantHockey.com. Just five years ago, it was 24.3 percent, and 20 years prior, 16.2 percent of the league was American. That's a pretty rapid change.

Despite that growth, it has been 23 years since the U.S. won a best-on-best senior tournament in men's hockey and nearly 40 since the men last claimed an Olympic gold medal. With the status of the World Cup of Hockey and NHL participation in the Olympics in flux, there may not be many opportunities for the U.S. to break those lengthy streaks.

Should that change, the likelihood of the 1997 and 2001 birth years playing a significant role in turning the tide seems awfully high.