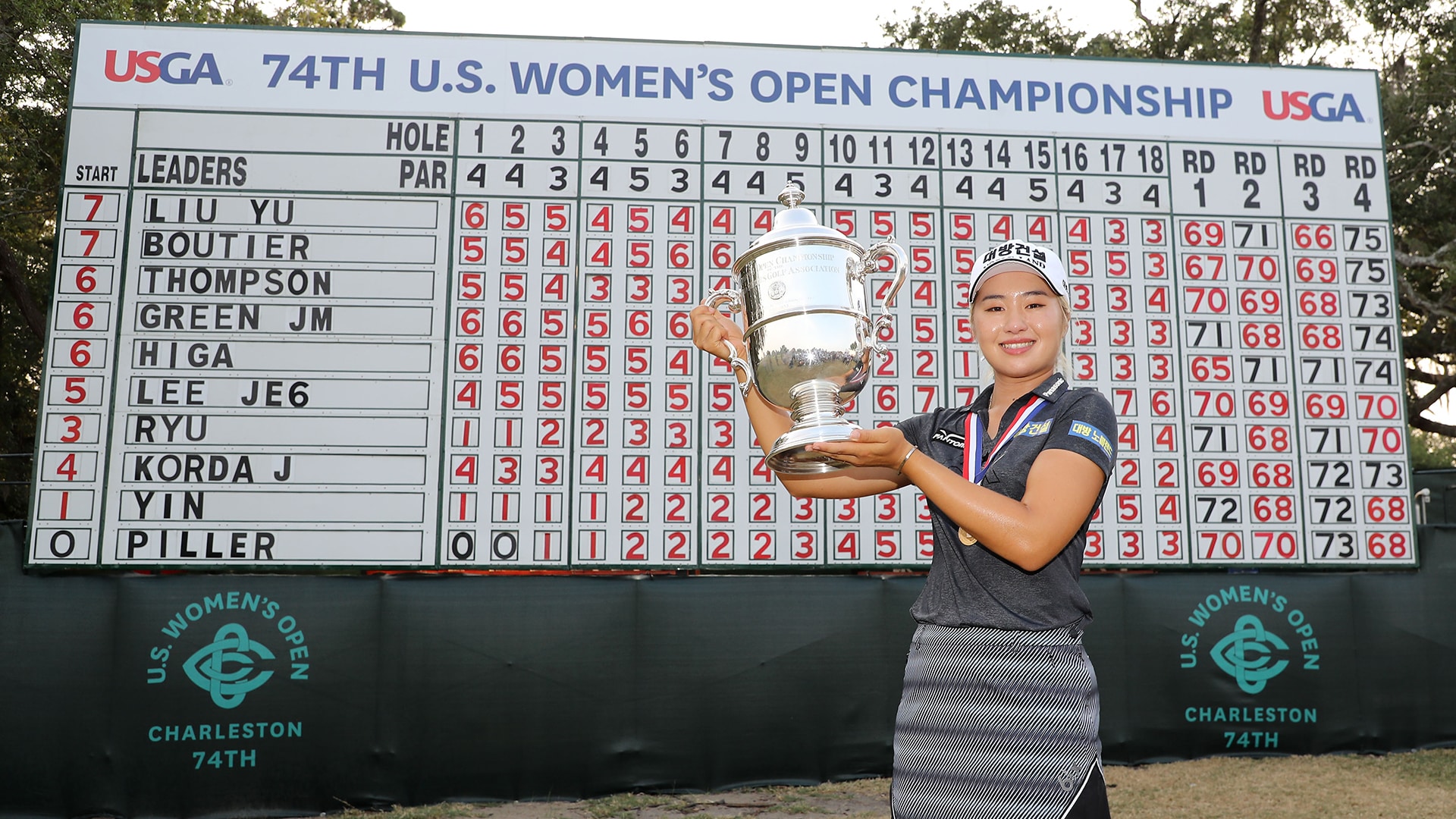 The 23-year-old South Korean shot a 1-under 70 on Sunday, enduring some shaky moments after opening up a three-stroke lead with three to play to hold off third-round co-leader Celine Boutier.

Lee6 was ahead by three after a birdie on the par-5 15th, but took bogeys on the 16th and 18th to give Boutier a chance over the final two holes. But Boutier missed a long birdie attempt on the 17th and put her approach to the par-4 18th in a bunker. Her sand shot rolled off the green.

Lee6, playing two groups ahead of Boutier, was practicing putts when the Frenchwoman could not make the sand shot. Lee6 bent down in joy when her victory was secure, countrywoman and 2011 U.S. Women's Open winner So Yeon Ryu coming over to embrace the new champion.

Lee6 finished at, naturally, 6-under 278 to claim the USGA's first $1 million women's winner check a few days after Tiger Woods' former swing coach, Hank Haney, made disparaging remarks about women's golf by predicting a ''Korean'' would win and ''I'd go with Lee.''

Lee6 has the number in her name because she was the sixth player with the name on the Korean LPGA. She has embraced the number, answering to it and writing a large ''6'' on her balls. Her South Korean fan club is called ''Lucky 6.'' Jeongeun Lee5 also plays the LPGA Tour.

Boutier made a double bogey on the final hole to fall into a tie for fifth at 3 under. She shot 75. Lexi Thompson, Ryu and Angel Yin tied for second, two shots behind. Thompson shot 73, Ryu 70 and Yin 68.

Gerina Piller, Jaye Marie Green, Mamiko Higa of Japan, and third-round co-leaders Yu Liu of China and Boutier were tied for fifth. Piller was the only under par at 68. Higa and Liu shot 74s.

Boutier and Liu, the good friends and former Duke teammates, figured to fight for the title. Instead, both threw away chances early as they combined for three bogeys and a double bogey on the first three holes.

Thompson began the round a shot off the lead in search for a second career major. But she too struggled early with bogeys on the first, third and fourth holes to drop off the pace.

Lee6 is hardly a surprise winner. She came in ranked 17th in the world and has won six times on the KLPGA Tour. She tied for fifth in this event in her 2017 debut and has three top 10s on the LPGA Tour this season.

''So looking at her as a rookie to play this tournament so well, I'm really proud of her as a fellow competitor and same country girl as well,'' Ryu said.

Higa faded in the final round after being a major contender at her first U.S. Women's Open. She set the tournament mark for lowest debut with her opening 65. She was a stroke in front through 36 holes and only a shot behind when the final round began. But she had five bogeys on her first 13 holes to fall back. She finished tied for sixth after a 74.

NCAA women's individual champion Maria Fassi started her first tournament as a pro 72-73 to make the cut on the number. She took flight on the weekend, going 68-70 to tie for 12th with a group at 1 under that included the tournament's low amateur in Gina Kim, part of Duke's recent NCAA team champion.

Two-time major champion Lydia Ko had a hole-in-one Sunday - the only of the week - on the difficult 11th hole. She hit a 6-iron from 172 yards and, moments later, heard cheers up near the green, but wasn't sure why. She found out soon enough for her second career ace, the other coming at the Rio Olympics. The 11th, built with a false front and two large protective bunkers on each side, played as the hardest hole this week.