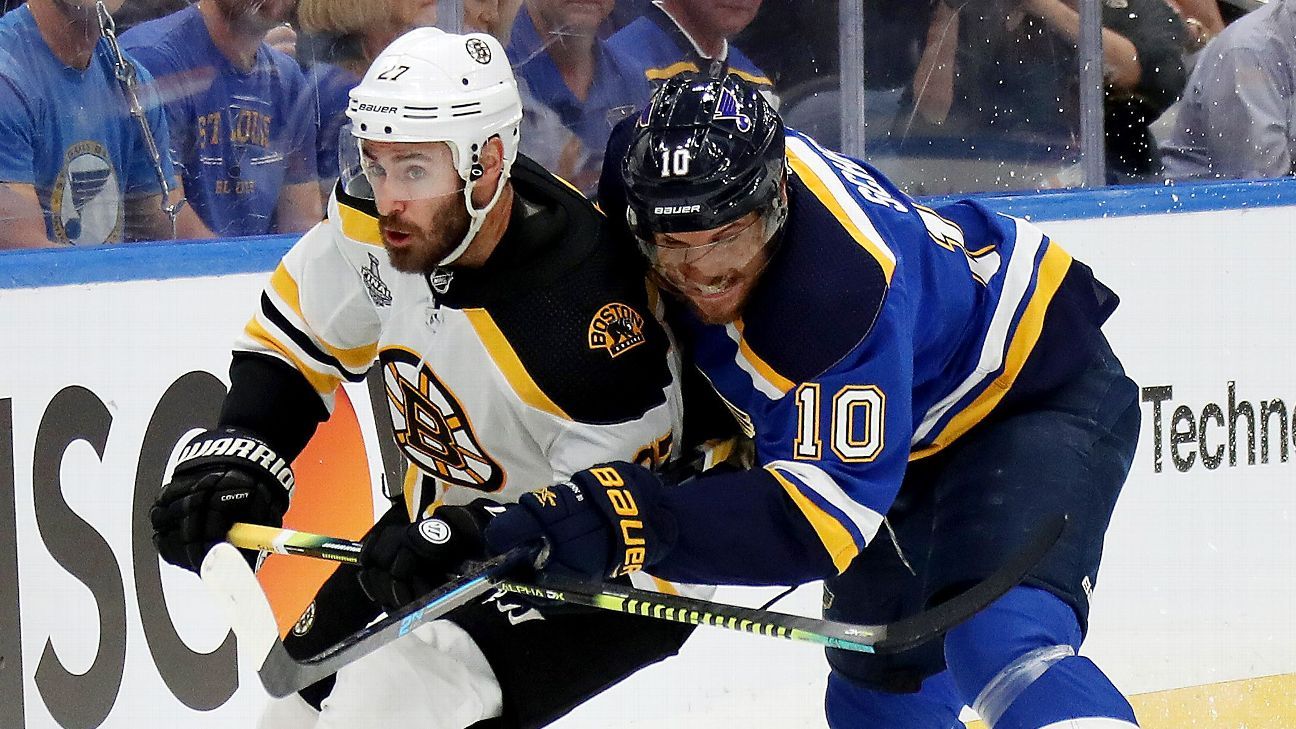 Game 4 of the Stanley Cup Final is scheduled for Monday between the Boston Bruins and the St. Louis Blues at Enterprise Center in St. Louis, with the Bruins leading 2-1 after their 7-2 rout of the Blues on Saturday. What can we expect in this critical matchup in St. Louis? Here's a little primer in today's Stanley Cup Daily.

Do the Blues have any hope here?

C'mon now, it's a 2-1 series. Remember how you felt after the Bruins' emphatic win after Game 1? And then the Blues came back and won Game 2 in overtime, and it was a brand new series? A split of the first four games of the Final is entirely possible.

But the Blues have one big hope for Game 4: Jordan Binnington.

The same Jordan Binnington who was pulled in Game 3?

The same one. It was the first time in his brief NHL career that the rookie sensation was pulled, so no one can be exactly sure how he'll react. But after losses, Binnington has been money: 6-2 with a 1.84 goals-against average and a .935 save percentage in the postseason. If the Blues are going to bounce back in this series, it'll be with that kind of effort.

How hard is Craig Berube working the refs right now?

Beyoncé wishes she worked this hard at a live show. The Blues coach tossed off the idea that his team has played undisciplined hockey in the first three games of the series -- handing the Bruins 14 power plays on which they've scored six goals -- because the Blues aren't really the kind of team that takes penalties.

"We were the least penalized team in the league in the first three rounds, " he said." Now all of a sudden we've taken 14 penalties in one series. So I don't know. I don't buy into all of that, to be honest with you. I think that we could definitely be more composed after the whistle. I think we've let some frustration get in there where we maybe do too much after the whistle. So we'll clean that up, for sure. But like I said, we were the least penalized team in the league coming into this series. I don't agree with all of the calls."

Does he have a point?

At the risk of getting slammed by those who think the NHL is in the tank for Bruins owner and Gary Bettman confidant Jeremy Jacobs ... no. You have to work to earn your power-play chances in the playoffs, and the Blues haven't earned enough of those opportunities with offensive zone time. In Game 3, Berube had only himself to blame for the delay of game penalty born from their failed coach's challenge on Sean Kuraly's first-period goal, which David Pastrnak turned into a 4-0 lead 41 seconds into the second period on the ensuing power play.

It never hurts to work the refs, but we're not sure the Blues have a gripe here. The players, in fact, have been acknowledging that emotions (and the Bruins) are getting the best of them. "We've got to do a better job as a team playing whistle to whistle, playing hard from the whistle to not worrying about the stuff after," center Brayden Schenn said. "I feel like if we can do that, we're effective. If we're worrying about playing hockey and not that extra stuff, we've got to focus on that."

Ryan O'Reilly, meanwhile, was one of the first Blues players to use the F-word when considering the penalties: "fatigue."

How great is this Bruins power play?

Well, considering they scored four goals on four shots in Game 3, we'd say pretty good. Considering they are one of only two teams in Stanley Cup Final history to have a perfect night on the power play with at least four attempts (the other being the 1980 New York Islanders), we'd say historically good.

Essentially, they stopped trying to force plays and took what the Blues were giving them. That included adding some movement to create seams for players such as point man Torey Krug (who had four points in Game 3) and shifting the power play's "bumper," Patrice Bergeron, from the half wall to higher in the zone, from where he deflected home the team's first goal. Boston coach Bruce Cassidy said the team worked on recovering pucks and supporting players in the attacking zone on the power play, which wasn't happening enough in Games 1 and 2. With these adjustments, a great thing got even better.

Any lineup changes to watch?

Only one for certain, which is the return of Blues fourth-line center (and sorely missed penalty-killer) Oskar Sundqvist after his one-game suspension for an illegal check in Game 2. Defenseman Vince Dunn seems like he's inching closer to a return for the Blues, and injured forward Robert Thomas remains questionable. Berube spoke glowingly of center Zach Sanford's play in Game 3, so he'll be an option.

Finally, what can we expect from the crowd?

Good question. The Blues failed to capitalize on the emotions of the first Stanley Cup Final game in St. Louis since 1970. In fact, after they blew a power-play chance just over three minutes into the game and the Bruins scored on one of their own minutes later, that energy started to change from elation to consternation.

That said, the crowds have been awesome in St. Louis, and this atmosphere will be no different. The Blues just have to do what they can to make sure the game isn't out of reach after 21 minutes this time.

And now, a counterargument from the Honorable Brad Marchand:

"There's a lot of energy in every single building in the NHL. Stanley Cup Final, it's expected, it's been that way the entire playoffs. Vegas has more energy in warm-ups than any team in the entire league. Yeah, it's loud in here, it's fun. It's loud in every building in the playoffs. Again, when you get on the ice, [the fans] mean nothing. It means nothing. You play the game on the ice. They're not out there stopping plays or scoring goals. It's what's played on the ice. That's what we're worried about. We're worried about the team that we're playing. We're worried about our team in here and not how loud the rink is."