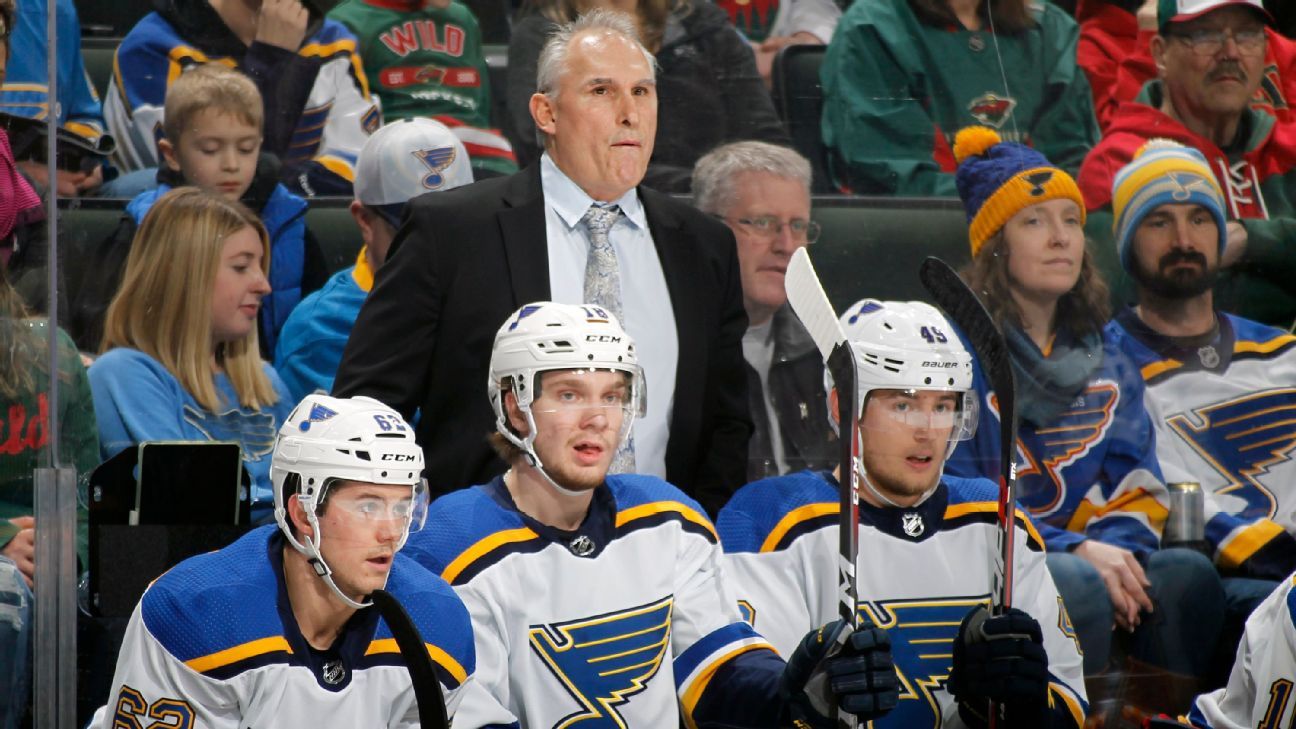 ST. LOUIS -- Blues coach Craig Berube said he doesn't know why his team has been penalized so much in the Stanley Cup Final, but he's not happy about it.

"First of all, we were the least penalized team in the league in the first three rounds; now all of a sudden we've taken 14 penalties in one series," Berube said Sunday, a day after a 7-2 Bruins drubbing. "So I don't know. I don't buy into all of that, to be honest with you. I think that we could definitely be more composed after the whistle. I think we've let some frustration get in there where we maybe do too much after the whistle. So we'll clean that up, for sure. But like I said, we were the least penalized team in the league coming into this series. I don't agree with all of the calls."

After averaging less than three penalties per game in the first three series -- a span of 19 games -- the Blues took five penalties in both Games 1 and 2, then four penalties in Game 3. Boston leads the series 2-1, with Game 4 on Monday in St. Louis.

The penalties have been especially damning considering the Bruins' power play has been historically good. Boston's power play has gone 23-for-63 (35.9 percent) this postseason, trailing only the 1981 Islanders for best playoff record of all time (minimum 15 games). Boston has been a ridiculous 14-of-28 on the road (50 percent) and they were frighteningly effective on Saturday; Boston went four-for-four on their power play, needing only four shots to score the four goals.

The Blues were without one of their primary penalty-killing forwards in Game 3. Oskar Sundqvist was serving his one-game suspension for boarding Matt Grzelcyk in Game 2. Sundqvist is poised to return to the lineup on Monday.

Berube said he has not sought explanation from the league on the officiating. "No, I mean, they make the calls and don't really give us explanations why," Berube said.

Berube said the penalty parade made it difficult for his staff to evaluate Game 3, which was a disaster for the Blues. The city of St. Louis was hosting its first Stanley Cup Final game in 49 years. There was a lengthy pregame ceremony featuring video montages of what this playoff run has meant to the city, and several celebrities were in the crowd, including actors Jon Hamm and Jenna Fischer, as well as Kansas City Chiefs players Patrick Mahomes and Travis Kelce. The Blues, however, fell flat, falling behind 3-0 in the first period.

Berube said he thought his team played pretty well when they were 5-on-5.

"The penalties, they get four PPGs out of it," Berube said. "The game gets out of reach, so it's a tough game to evaluate. We're going to be fine tomorrow. Our guys will be dialed in, ready to go. they've always responded well after a loss. Like I said, we've lost Game 3s in all three rounds and really came back and played well in Game 4s."