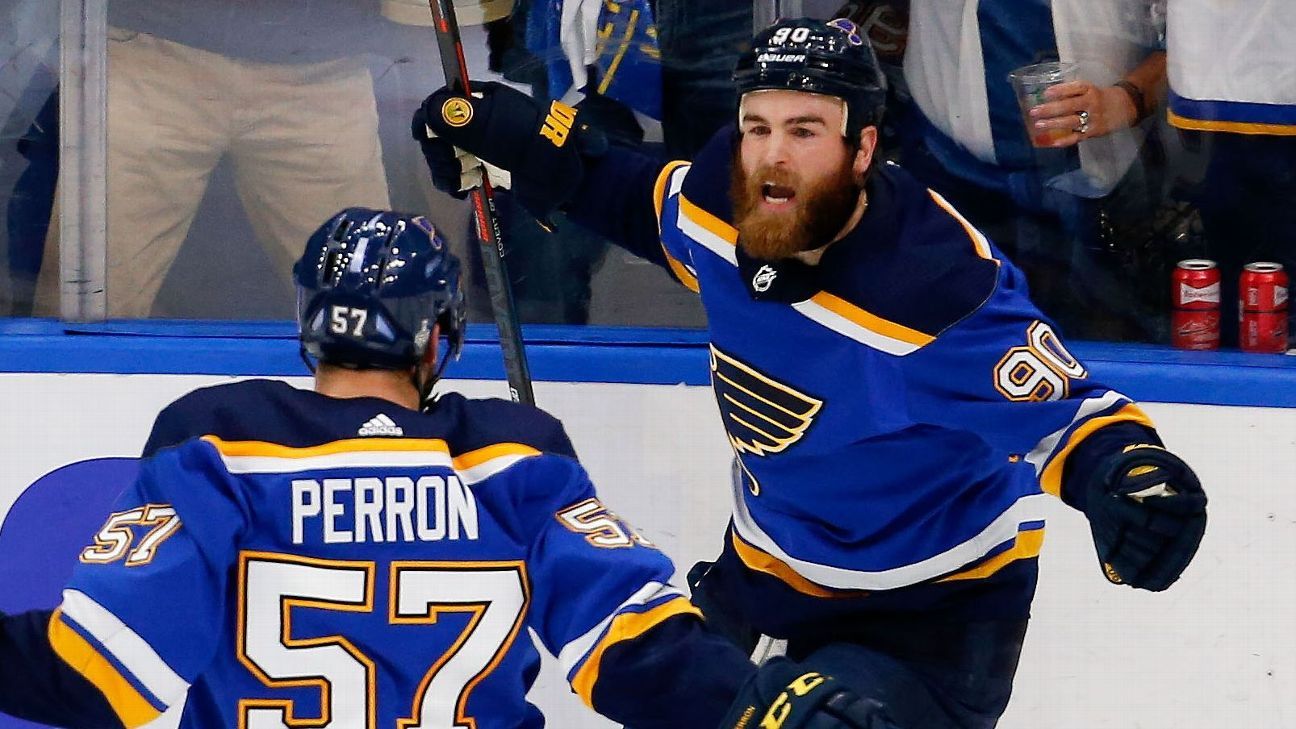 Was there any doubt that this series was going to be a long one? After laying an egg in Game 3, the St. Louis Blues bounced back with a 4-2 win in Game 4 that left the home crowd singing along to "Gloria," and the Stanley Cup Final against the Boston Bruins tied at two games apiece.

Here's everything you need to know about how Game 4 played out in this edition of ESPN Stanley Cup Playoffs Daily.

Boston goalie Tuukka Rask called St. Louis the more desperate team on Monday, and he's probably right. The Blues benefited from some lineup maneuvering by coach Craig Berube -- Vince Dunn, making his Stanley Cup Final debut returning from injury, and Zach Sanford, a nice boost on the second line, both assisted on the first goal -- as St. Louis scored 43 seconds in (thanks, Ryan O'Reilly), then weathered some attacks from Boston, including a short-handed goal. (If you're looking to criticize something about the Blues' game, look to their power play, which was rough to watch.) In the end, it was O'Reilly who scored again for the game winner. The veteran center, who had just three playoff goals entering this game, buzzed all night.

The Blues, with renewed discipline, have now scored in the opening two minutes of a game six times in the playoffs, and at least once in all four rounds. They're 5-0 so far when doing so. Rask, by the way, looked vulnerable for the first time in a while. It was the first time he allowed three goals in regulation since the second round against Columbus. And once again, Jordan Binnington and the Blues prove they rule the ice when rebounding after a loss this postseason.

1. Ryan O'Reilly, C, St. Louis Blues. O'Reilly did something only three players had done previously: score in the opening minute of a Stanley Cup Final game and later score the eventual winner in the same game. (The others: Fernando Pisani in 2006 for the Oilers, Bernie Geoffrion in 1958 for the Canadiens and Sid Smith in 1951 for the Maple Leafs.)

O'Reilly: Blues had a 'massive response' to Game 3 loss

Ryan O'Reilly breaks down how the Blues bounced back to even the series after Game 3 and also praises Jordan Binnington's performance in the net.

2. Alex Pietrangelo, D, St. Louis Blues. The captain had two assists, and was 23 seconds shy of playing a ridiculous 30 minutes while taking a whopping 34 shifts.

3. Zach Sanford, LW, St. Louis Blues. Stanford drew into the lineup in Game 3 thanks to Oskar Sundqvist's suspension. He played so well, Blues coach Craig Berube promoted Sanford to the second line in Game 4. He did not disappoint, adding a nice boost to the line.

Ryan O'Reilly with a stellar wraparound goal and the @StLouisBlues take an early lead in Game 4! ��#StanleyCup pic.twitter.com/KjSCxw1slc

The crowd went absolutely berserk after this goal, just 43 seconds into the game.

The Bruins losing captain Zdeno Chara in the second period after a puck deflected to his face and he bled profusely. Chara could miss Game 5, which is especially troublesome considering the team is already without top-four defenseman Matt Grzelcyk (concussion protocol). Chara got some stitches and may need dental work later, according to coach Bruce Cassidy. If he cannot go for Game 5, the Bruins will turn to either Steven Kampfer (two games of playoff experience this spring), or a fellow left-handed shot like Urho Vaakanainen or Jeremy Lazon, who both have limited NHL experience.

Sports: they bring people* together.

"He's a guy who wants to be out there. He wants to battle and be with the guys. He wasn't gonna miss that opportunity. He doesn't get back on the ice, but he's a warrior. If there's any chance for him to be back, he'll be back. If not, it'll be next man up again. Whoever our next guy up is will have to fill that role admirably -- and they're big feet to fill." -- David Backes on Zdeno Chara returning to the bench to sit with teammates in the third period, even though he was not medically cleared to play.