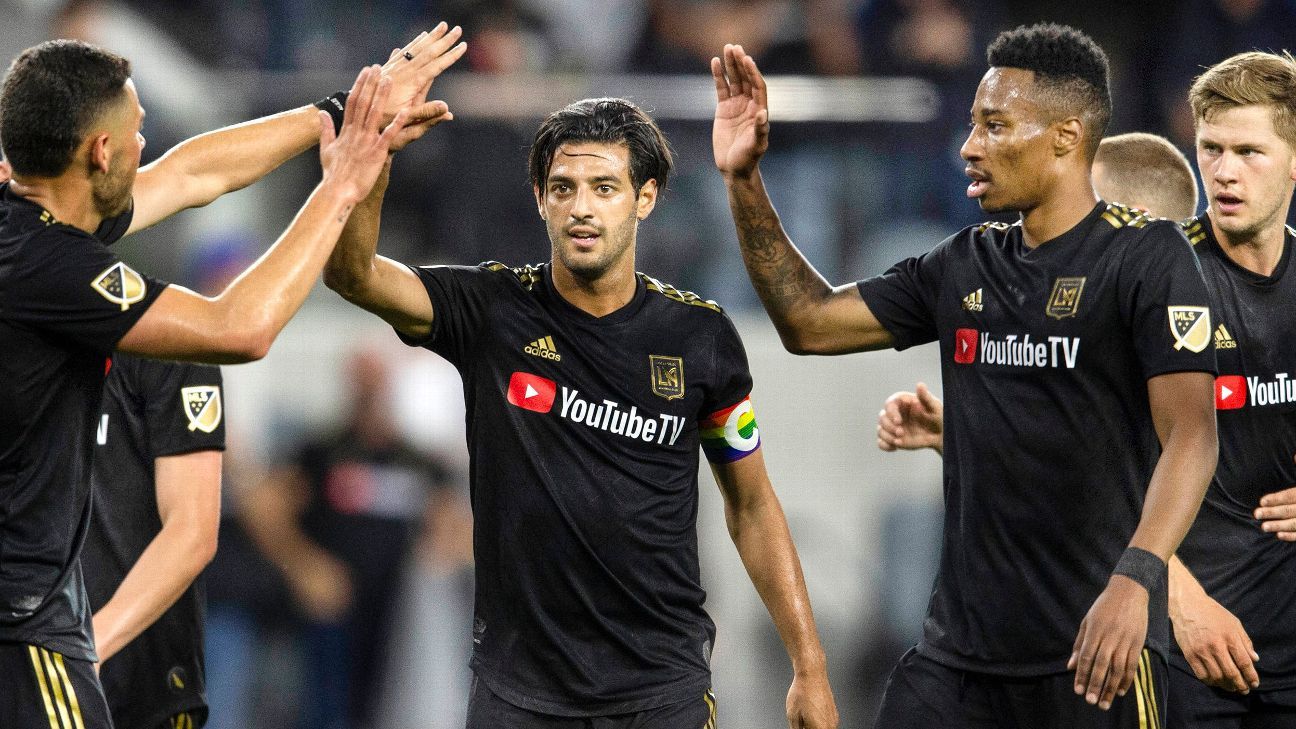 After a handful of games from Wednesday to Saturday, MLS is now officially on its Gold Cup break -- a break that lasts just long enough for teams to get a breather and regroup, but not long enough that most teams will have their contingent of internationals back, CONCACAF-affiliated or otherwise.

It's all very MLS. There's no denying that some teams need the break a lot more than others.

The paucity of games means that the rankings aren't dramatically different than last week, when we did a reset of things just ahead of the mid-season pause, but we are rewarding a few teams who started the season poorly for a spurt of good form.

We're not heartless, after all. We know just how important these rankings are.

With their Gold Cup hiatus underway, LAFC are reportedly on the verge of completing a bit of business by selling Andre Horta back to SC Braga of Portugal. Horta never clicked in LA and the club is taking a bath on the deal, but how many clubs could whiff that hard, admit failure, and not really have a problem?

The Union handled a weakened Red Bull team on Saturday, opening up a four-point gap in the Eastern Conference. Ilsinho doesn't always do magic, but he seems to pull out the tricks when Philadelphia needs him most. Saturday's assist and goal coming off the bench made the difference.

Union come from 2-0 down to beat Red Bulls

Philadelphia's dream start to the MLS season continued as Ilsinho inspired the Union to a 3-2 win over the New York Red Bulls after trailing 2-0.

While crossing their fingers that a trio of Hondurans and a smattering of other players don't get hurt on international duty, the Dynamo prepare for a trip to Portland that will happen before the Gold Cup contingent returns.

City scored seven goals (five for themselves, two for FC Cincinnati) in a win on Wednesday night that extended the unbeaten run to 10 games. Even with the run, NYCFC was suffering from a decided lack of wins -- getting three points against the league's worst team was a must.

The Galaxy laboured their way to a 2-1 defeat at home against New England on Sunday night. It's the kind of result that looks bad on paper and worse in reality. LA now hits a brief pause ahead of the Gold Cup, a well-timed chance to recharge the batteries and work out some of the defensive kinks in evidence against the Revs.

United is 0-4-1 in their last five matches, seems prone to silly mistakes, isn't getting great production from its stars, and is still just four points back of first place in the Eastern Conference. Things could be worse at Gold Cup time.

You can't really have a "vintage" performance when you're only in your third season as a club, but we're going to say it anyway: The vintage version of Atlanta United showed up on Saturday against Chicago. The Five Stripes are now in third and charging up the table -- do we even need to say "watch out" to the rest of the East?

The Red Bulls got Ilsinho'd. Sometimes it happens. Whatcha gonna do?

Considering how much time Ignacio Piatti has missed in 2019, and the up-and-down nature of the Impact's form, the fact that Remi Garde has Montreal in second place in the East (tied with DC United) is pretty remarkable.

FC Dallas enters the Gold Cup break in fifth place, fresh off a weird draw against San Jose playing with a makeshift group. The bright spot was the goal from debutant Francis Atuahene, a player the club needs because of the thin roster entering the summer.

Missing something like half their team, the Sounders dropped a result in Montreal in midweek. No reason to panic, maybe, but that makes it a three-game losing streak for Brian Schmetzer's club.

Every glimmer of hope in Minnesota is quickly followed by a painful setback. Three losses in a row has the dark clouds descending on the Loons and it will be a major test of Adrian Heath. Counting on a weak group of clubs to salvage the playoffs in the West is not a winning formula.

The Lions are the current title holder of the ESPN MLS Power Rankings "Dead Average" award. Good enough to represent a threat, bad enough that a multiple goal loss to a bottom feeder is never a surprise.

Toronto FC got VAR'd hard at home against Sporting, playing without Michael Bradley and Jozy Altidore. But the Reds fought back from VAR-assisted deficits twice to secure a point, which is some comfort.

Chris Wondolowski scored again and the Quakes earned a point on the road in Frisco despite the howler of the year from Daniel Vega. The Quakes deserve more credit then they got here -- taking eight points from a possible 12 in their last four matches has pulled them into playoff contention.

The San Jose Earthquakes came back from a goal down but couldn't hang on, as FC Dallas drew level in the final minutes at Avaya Stadium.

The Gold Cup break brings intrigue to Utah, where the rumour is that Joao Plata is headed for Mexico. The Ecuadorian has done some good work in the shadow of the Wasatch, but he's not a first choice player for Mike Petke at this point. Can RSL snag a more productive player when the transfer window opens in July?

The Crew are off until June 23 for the Gold Cup, so let's instead consider the news this week that the club's new downtown stadium is tentatively scheduled to open during the 2021 season. With all that the Crew fans have been through, the idea of their club getting a second soccer-specific venue must seem like an unbelievable dream.

THE RAPIDS AREN'T IN LAST PLACE ANYMORE! Sure, Portland has played three fewer games and Colorado still has a worse goal differential, but positives are positives. Credit where it's due -- Conor Casey's side has a five-game unbeaten run going and more points in their last five than everyone but LAFC.

The Timbers' disastrous start to the season didn't end their chances at the playoffs and neither did the loss to LAFC in the first home game of the year. They lost that game, but the fight (both figurative and literal) they showed should be a platform for the rest of the season.

Revs fans got to see Bruce Arena get a win in his first game in charge of the club last week against LA, but they'll have to wait until another few weeks to see the new head coach stalk the sidelines at home. In the meantime, there's an Open Cup match in Jersey that Arena probably won't take very seriously.

Two soft penalties helped SKC get a point in the Great White North, a fine result on paper. The problem is that Sporting had three (much needed) points in their grasp and broke down defensively in the final minutes of the game. 2019, even with injuries considered, is not feeling very Vermesian.

Yordy Reyna is quite often the difference between Vancouver showing any teeth on the attacking end and lacking any menace at all. Friday's result was a perfect example, with the Peruvian changing the complexion of the game for the Whitecaps when he came on as a substitute with about a half-hour to go.

We'll leave this one to Dax McCarty. "It's not been good enough," he said after the 2-0 loss in Atlanta. "The entire season's not been good enough. So if guys can't figure what they want and if they don't want to be here then maybe we need to have honest conversations with ourselves because it's not good enough from the team."

FCC got housed at The House That Ruth Built (2.0) by NYCFC on Thursday and didn't even get to score their own consolation goals. Generally speaking, it's a very bad sign when Own Goal is tied for the team lead in goals scored.

More in this category: « Ramsey has played last Arsenal match - Emery U.S. in disarray ahead of Gold Cup »
back to top