U.S. national team roundtable: Should we be worried about their Gold Cup chances? 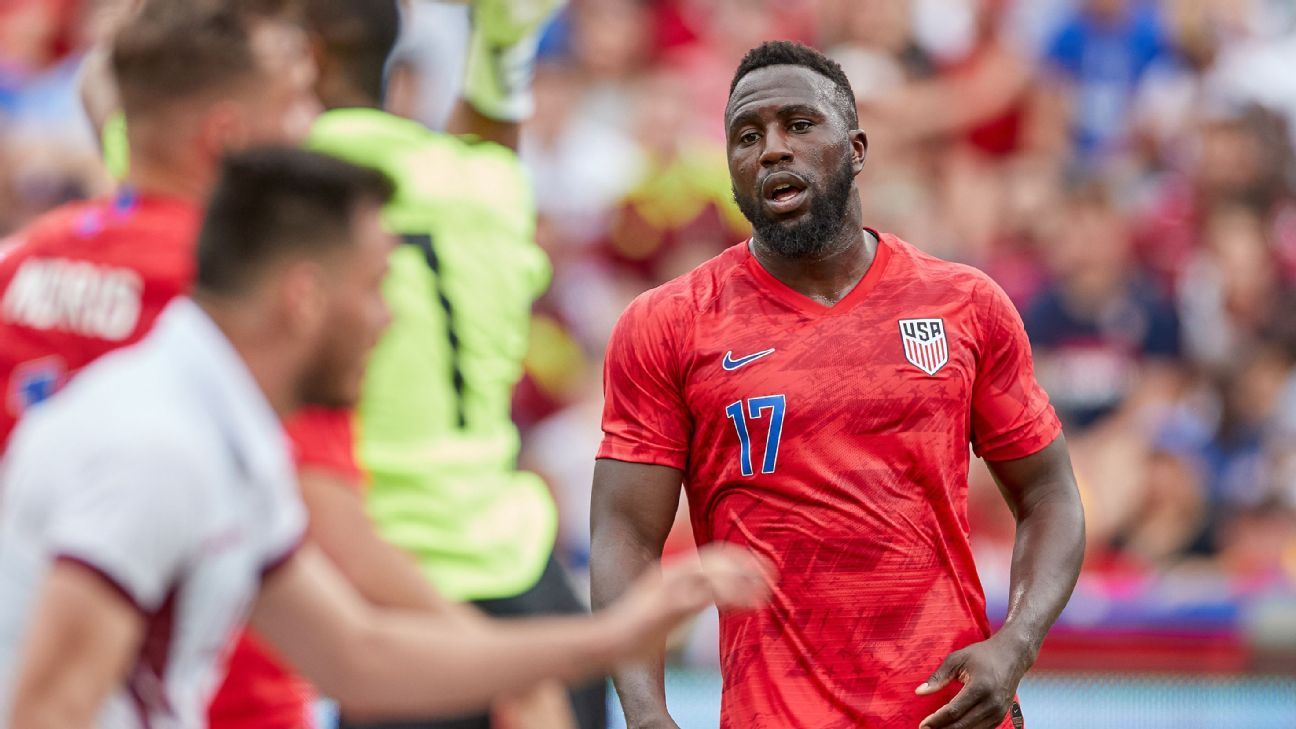 The 2019 Gold Cup begins on Saturday, June 15 as Mexico take on Cuba in Los Angeles and the U.S. kick off their campaign to defend their crown next Tuesday with a game against Guyana in Saint Paul, Minnesota. While Mexico look just fine with nothing but wins under Gerardo "Tata" Martino, the same cannot be said of the Yanks: the Gregg Berhalter regime has been uneven since he took over in January, with the recent warm-up defeats to Jamaica and Venezuela causing some panic among the fans.

So, with a week until the Gold Cup hosts' opening game, we decided to take stock of where this team stands and whether there's cause for concern about their worrying form.

Should we be worried about Berhalter and his squad? Why or why not?

Jeff Carlisle (@JeffreyCarlisle): Definitely. The U.S. players just don't look like they're on the same page at all. Granted, they've been missing the likes of Christian Pulisic, Tyler Adams, Michael Bradley and Jozy Altidore (save for 45 minutes on Sunday). But that does''t excuse the poor execution and basic mistakes.

There has been plenty of talk about Berhalter and his new system but there seems to have been more than enough time to at least lay a foundation, especially on the defensive side of the ball. The attack, meanwhile, has struggled to create much of anything.

Why aren't these concepts getting through?

Kristian Dyer (@KristianRDyer): Yes, we should be worried, but we shouldn't panic quite yet. It is going to take time for Berhalter to learn his team and his players to learn him. Unlike previous cycles under a new head coach, the combination of Jurgen Klinsmann and Bruce Arena left little depth and developed few players to carry over for their successor. So a learning curve is to be expected.

If this team underperforms in the Gold Cup, then there should be genuine concern. But right now, Berhalter should be tinkering and building combinations and depth. Early returns, though, are far from encouraging.

Jason Davis (@davisjsn): Yes. Berhalter hasn't had a lot of time to work with his full group due to variety of factors, and while that will buy him some small measure of leeway in certain quarters, it also means that his team enters the Gold Cup having not put a single strong performance together with his best XI. With a simpler approach, that might not be a problem, but because Berhalter's system demands a higher level of understanding and cooperation, it's worrying that that they arrive at the tournament still in progress.

Arch Bell (@ArchBell): Absolutely. This team is an absolute disaster right now. They were outclassed by a Jamaica B side boasting more USL players than MLS talent and were then completely humiliated by a Venezuela team that coasted to victory after putting up three goals in the first half.

Most worrisome are the errors that the U.S. is committing. They're happening all over the field. Passes are being played out of bounds, players are reacting late and they seemingly panic any time there is the slightest bit of pressure. U.S. fans have every right to be concerned.

Noah Davis (@noahedavis): Definitely maybe. They've looked very bad/not good in losses to Jamaica and Venezuela, but Berhalter was without some of his best players, a problem for what is a top-heavy squad in terms of talent. Panic if you must, but don't abandon hope. At least not yet. See what happens during the Gold Cup if the work-in-progress that is Berhalter's plan makes progress or if it looks like the chaotic and lost mishmash of the past two friendlies. If it's the former, take solace. If it's the latter, get worried.

Gomez: 'All is well' if USMNT make Gold Cup final

Herculez Gomez explains why success for the USMNT at the Gold Cup will be defined by making the final, not necessarily repeating as champions.

What is the best XI and formation for this team based on the Gold Cup squad?

If I'm trying to pick Berhalter's brain and guess what he'll do, it will be a 4-1-4-1 like this: Steffen; Adams, Miazga, Aaron Long, Ream; Bradley; Boyd, McKennie, Pulisic, Paul Arriola; Altidore.

Taking lumps with Mihailovic could be worthwhile, not only to develop him but to put him on display for a European suitor.

JD: It's very hard to know for the reason outlined above, but based on the players Berhalter has chosen for the roster (feeding into his 4-1-4-1 or 4-3-3 system) the best lineup, while acknowledging that the coach is guaranteed to see it very differently, looks like this: Steffen; Lima, Long, Miazga, Ream; Adams; Boyd, McKennie, Pulisic, Arriola; Altidore.

This lineup has Adams in midfield (Berhalter clearly has him earmarked for the hybrid right-back role) and stays with the imperfect solution of Tim Ream at left-back. Boyd over Jordan Morris is a toss-up.

Despite his gaffe on Sunday, Steffen is still the best choice ahead of Sean Johnson in goal. Lima wandered all over the place against Jamaica but was slightly better against Venezuela. Berhalter likes to play Adams at right-back but would be better served as the defensive midfielder, like he is for his club, RB Leipzig. The midfield is fairly straightforward with McKennie, Pulisic and Arriola, with Duane Holmes a possible option in place of Arriola. Up top, Boyd and Altidore could make for a decent pairing.

First observation: Winning the Gold Cup doesn't matter. It's a silly tournament that means nothing. Second observation: given the first observation, take some chances, try some things and build for the future. The lineup above isn't the lineup I'd go with if I needed to win a one-off game, but it's one that might give some ideas about where Berhalter goes from here. We look toward the future, always.

What is the one thing you think this squad is missing?

JC: Easy. They lack creativity. Other than Pulisic, there simply aren't enough difference-makers in the attacking third. Having more creative outlets would take pressure off the backline and off Pulisic, too. As it stands now, when Pulisic is on the field, opponents simply foul him and dare someone else to beat them. When he isn't ... well, you saw the Jamaica and Venezuela games. There isn't really anyone else stepping up (although we'll see if Boyd can add something). Someone needs to though. The U.S. can't always rely on Pulisic to deliver a bit of magic and bail them out.

KD: This squad is missing Tab Ramos as head coach, in my opinion, but that's neither here nor there. On the field, an argument could be made that a left-back who could push forward would be an asset to this team. In the near term, Kik Pierie would be a real asset to this starting XI if he opts to represent the U.S. and would be an ideal left-back for Berhalter's system. Long term, I'd say Efrain Alvarez would be the ideal attacking piece to add either out wide or centrally in the midfield. A full-court press has to be made for the LA Galaxy attacker.

JD: It would be easy to say "leadership" because both warm-up losses showed a decided lack of it. The Americans shrunk in both games and could have used a veteran presence to push the team forward.

Ultimately, the best answer is a ball-winner in midfield. While Wil Trapp has many fine qualities, the Columbus Crew midfielder is not adept at recovering the ball across the middle third. A stronger defensive figure would not only help prevent the sort of goals scored by Jamaica and Venezuela, it would allow the U.S. to attack with more speed and vigor in transition.

AB: The U.S. have still not sorted out their spine. Center-back continues to be a revolving door, but at least there is hope on the horizon with U-20 stud Chris Richards. Also, who slots in as the No. 6? Is it Trapp, Bradley or should it be Adams? Trapp has not been up to snuff, while Bradley is not the future and Berhalter sees Adams more as a right-back. Then there is the striker question. Altidore may frustrate fans, but he's still the best striker the U.S. have. Who should join him? It's up in the air.

ND: Heart, at least if the two friendlies are any indication. The players on the field against Jamaica and Venezuela looked apathetic at best, not going into tackles, pressing lackadaisically and treating the ball like a hot potato. The U.S. player pool isn't good enough to win games in a low gear. A selling point of Berhalter's hire was that he'd be able to reinstall a sense of purpose. His struggle to do so is, by far, the most concerning aspect of his short tenure thus far.