How France turned Horan into a U.S. star 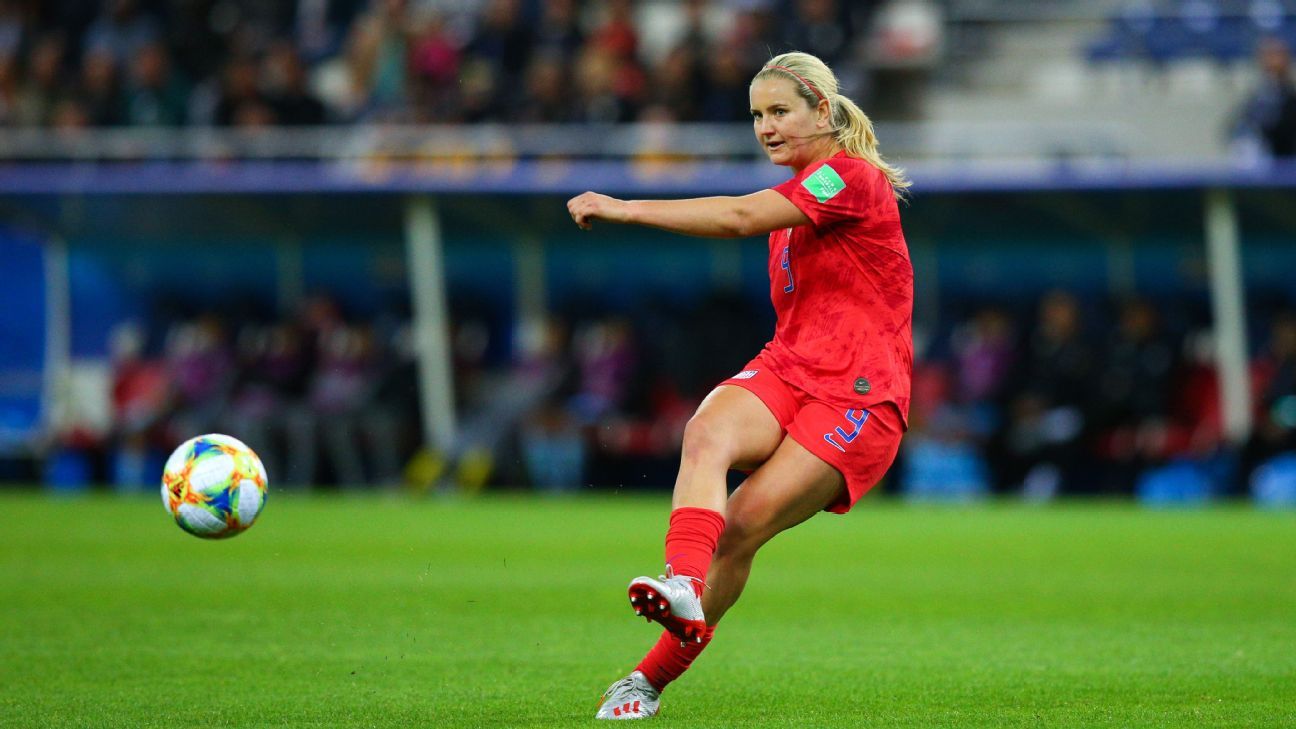 PARIS -- For the players involved, a World Cup can be a repetitive cycle of meetings, practices, meals and waiting that is interrupted only occasionally by 90 minutes of soccer. So it was hardly a surprise to find a contingent of American players wasting time at one of the countless outdoor cafes in Reims, France, a few days before the U.S. played its opening game.

And it was hardly a surprise to see Lindsey Horan take charge when someone needed to act as spokesperson in the interactions with the waitstaff. Still a few days away from her World Cup debut, she wasn't the most senior player in the group. But after living and working in the country for more than three years as a member of Paris Saint-Germain, she is the team's Francophile. When it comes to navigation or language, teammates are happy to follow her lead.

"She's definitely guiding us around," Samantha Mewis said after the team moved on to Paris. "She gives us little French tips when we have questions. My parents and I followed behind her and her parents last night, like 10 feet away, to dinner because I had no idea where to go. So we were just like little ducklings."

What remains to be seen is whether a generation of players will follow her lead to future World Cups. Against the backdrop of this tournament in Europe -- one in which the oft-discussed recent rapid growth of national teams such as those from England, the Netherlands, Spain and even host France will be tested -- Horan is at least partly the product of a European development model.

After a successful debut with a goal in the rout of Thailand, her return to Paris for Sunday's game against Chile brings her full circle. She once came to this city as a teenager looking for a soccer experience she couldn't get at home. Now she returns hoping to prove the U.S. remains a team unlike any in the world.

"I went through a lot," Horan said last week. "But it's prepared me for me being here today."

The World Cup now underway in France had yet to be awarded to the country when Horan made headlines by passing up a scholarship at the University of North Carolina to sign a professional contract with PSG in 2012. While the money committed to the men's team drew more attention after Qatari interests purchased Paris Saint-Germain in 2011, the takeover also marked a new era for the women's team, which saw funds committed to foreign players such as Horan and Sweden's Kosovare Asllani. It was big-time soccer.

While common enough in a sport such as tennis, Horan's move to bypass college in favor of the professional ranks was essentially unprecedented in major women's team sports in the United States. It created a path where none previously existed, even if trailblazing wasn't her intention.

"At the time, that definitely is not what I was thinking," Horan, 25, said this week. "It was more so just what was best for me, and what I needed to do to meet my goals and put myself in an uncomfortable position. And something that I've always wanted to do in my life was play professionally overseas and do whatever I could to get myself on the women's national team."

Among those well aware of Horan at the time was Jill Ellis, in her role as a college coach at UCLA until 2011 and then as U.S. Soccer development director when Horan signed with PSG.

"I was a little bit surprised," Ellis recalled, "but I've always been someone that believes that people have to determine their own path. And I never want to walk in someone's shoes. So I applauded her for that, the courage to make that decision, to pursue that goal."

As invested as Ellis is in the college model, not just from her time as a coach but also as a student who found far greater soccer opportunities in the U.S. than her native England, she is also a realist now in charge of a national team competing against nations with very different developmental models. Foreign players abound on NCAA rosters -- a Finnish player captained Florida State to the national title in 2018. World Cup rosters, too, are full of women who played college soccer in the United States. It's still a model that works for a lot of people in a lot of places.

Yet increasingly at the very top of the sport, it's a model that separates the U.S. from most of its main rivals. And arguably constrains it.

U.S. defender Crystal Dunn took the collegiate path Horan bypassed, playing at North Carolina, but she also saw the emerging alternative while playing for a year with Chelsea. From youth teams to the senior team, men or women, the club was interconnected. Teenagers trained next to, and sometimes alongside, pros perhaps a decade older.

"I think that really was important for them to be thrown in that environment and obviously see where they stand," Dunn said. "Just the way they set up their development is really spectacular because they put a lot of thought and resources into their youth because they feel like that's the key to the future. It's important that the young ones are feeling like pros."

That's the path Horan followed from the time she was 18.

Now one of Horan's close friends on the U.S. team, having played alongside her going back to the under-20 national team, Rose Lavelle on Thursday recalled being intimidated when Horan, the professional, came into the same youth team for the first time. Later, in regard to her own journey, Lavelle also talked about how much more seriously she had to take soccer, the mental and physical preparation, when she entered the National Women's Soccer League and debuted for the senior national team in 2017. As a college player, she admitted, she could get by with some shortcuts.

Horan didn't get to take those shortcuts. She was a pro among amateurs when she returned to youth camps. That would seem intimidating to those around her.

"I was so used to playing on my youth team [growing up in Colorado] and being one of the best players and being able to do whatever I wanted," Horan said. "It was a different situation with PSG. I had to learn how to come off the bench, as well, and not always have that starting role. It made me mentally tougher."

Horan sounded almost wistful this week talking about the pleasure of hearing French again, even as she knocked the rust off of her own language skills. She has talked in the past of cherishing memories as simple as taking her parents to see tourist destinations when they visited. Time gilds memories. But she doesn't hide the fact that soccer was only part of the challenge, maybe even the easier part.

"It's insanely different," Horan said recently. "At 18 in Paris, I'm young, I'm shy, I'm very nervous about the culture and language, and socially just kept myself inside and didn't get out there until more internationals came and Tobin [Heath] was there. And as I got more comfortable, things started getting easier for me and I actually got out of my apartment."

Ideally, of course, players who choose the same path as Horan won't have to follow it across any oceans. The NWSL wasn't in operation when Horan went overseas. The model for the select few in the future might look more like U.S. teammate Mallory Pugh, who elected not to play college soccer at UCLA and signed professionally with the Washington Spirit. Olivia Moultrie, who signed with the Portland Thorns at 13, might be next in line.

But whether it's in their own country or overseas, where the monetary possibilities and training facilities from teams such as recent Champions League finalists Barcelona and Lyon will always be tempting, players pondering the decision would be wise to consider not just Horan playing in front of thousands in Paris this weekend but also Horan sitting alone and uncertain in an apartment at 18.

"They just have to know it inside," Horan said recently. "It took me a year to make the decision to go pro and skip college and give up that. You really have to know inside that you do not want to do [the college route], that professional soccer is what you want to do with your life.

Lloyd: I hope Thailand keep their heads up

Carli Lloyd commented on her exchange with Thailand's goalkeeper after the USWNT beat them 13-0 in their World Cup opener.

"You're giving up a lot, and you need to know it's not going to be easy."

The midfielder now so important for U.S. title hopes, who switched effortlessly in the opening game between playing deep in midfield as a conductor to attacking the goal from a wider position, was made in Portland just as much as Paris. The reigning NWSL MVP cites that club as the place where she found her confidence as a world-class player.

"We kind of always knew she'd be here," Mewis said of the World Cup. "Everyone in the youth camps was always like, 'We just knew that this was where Lindsey was going to end up.'"

Back on a soccer field in Paris, as it turns out.