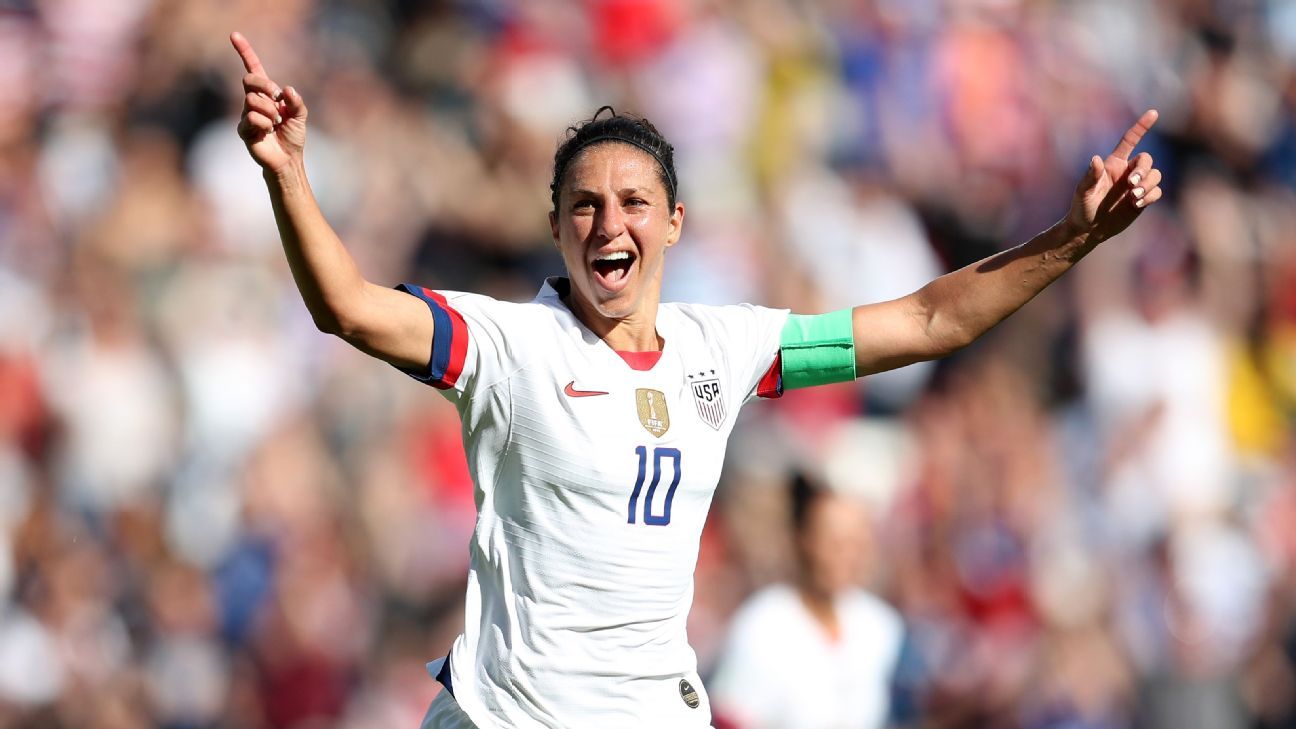 PARIS -- The United States can't officially clinch a place as the best team in its World Cup group until later this week, but it used Sunday's game against Chile to show that even its second team is among the best in the world.

Despite wholesale changes to the starting lineup that routed Thailand, the U.S. beat Chile 3-0 to remain on top of Group F and advance to the knockout round. Both the U.S. and Sweden enter the final round of group play with six points from two wins, but the Americans possess a vastly superior goal differential.

On a day when the American presence in Paris made the red, white and blue of Parc des Princes, normally home to Paris Saint-Germain, an appropriate home away from home with a crowd of 45,594, the U.S. looked at ease from the outset.

In her first start this World Cup, Carli Lloyd needed just over 10 minutes to set a record by scoring in her sixth consecutive World Cup game. She then set another record when, at age 36, she became the oldest player to score two goals in a World Cup game.

Only a missed penalty, awarded after VAR intervention, slowed Lloyd.

Julie Ertz scored the other American goal in the opening half, the first World Cup goal for a player who starred as a defender in the 2015 tournament.

And if the U.S. didn't pile on the goals in the second half this time, it was more because of Christiane Endler's heroics in goal than because the U.S. took its foot off the gas, but the performance was hardly less comprehensive.

The U.S. and Sweden, which beat Thailand earlier in the day, will renew their very frequent rivalry in Le Havre on Thursday. Takeaways from Sunday's match:

In again defending her team's celebrations in its opening win against Thailand, Jill Ellis talked the day before the game against Chile about considering the individual context behind each goal. She used Lloyd as an example, saying she knew exactly how much work Lloyd had put in to be on the field as a goal-scoring threat at 36. That effort warranted celebration.

Well, despite the U.S. breaking out a golf-clap celebration on Lloyd's opening goal against Chile, poking fun at the controversy over their celebrations in the opening game, the captain again earned the right to celebrate Sunday. Lloyd has insisted that she wants to start, believes she can start and is still fully capable of influencing games for 90 minutes. That just isn't her role on a regular basis at the moment.

"Every day she comes to train, and she's one of the most competitive day in and day out," Becky Sauerbrunn said. "She's very vigilant when it comes to what she needs to do every single day to make sure she's the best. She wants to be on the field, and she trains like she wants to be on the field. I think whenever anyone asks her 'Are you OK coming off the bench?' -- no, she's not OK with it because she's a true competitor.

This wasn't a World Cup final against Japan, and she didn't quite complete the hat trick. But Sunday made her point decisively. She's not done.

The second-best team in France?

The U.S. made seven changes to the starting lineup from its opening game, a nod both to its own depth and the reality that Chile is a weaker side than any the U.S. is likely to face from here on out in the tournament. There wasn't much to criticize in the opening game against Thailand, so it's safe to assume the changes that took the entire front line, Crystal Dunn, Rose Lavelle, Sam Mewis and Kelley O'Hara, out of the lineup weren't punitive for poor performance.

"I feel like this team has incredible depth," Alex Morgan said. "And when [Ellis] chooses who goes on during a game and who starts, there's no explanation needed. We trust in her. It was pretty incredible that we were able to get all 20 field players on the pitch the first two games."

This was about managing the roster with an eye toward playing seven games. In fact, if the U.S. makes it to the final, it will play six games in 22 days, beginning Sunday. That's a hefty workload for the oldest team in the tournament. Resting players over 30 like Tobin Heath, O'Hara and Megan Rapinoe makes sense, as does seizing the opportunity to get minutes for players like Morgan Brian, a World Cup veteran but a surprise inclusion on this roster.

Ellis did the same thing in the second game of World Cup qualifying last fall, then reverted back to her original starting 11 for the remainder of that tournament.

But if the purpose of the changes was boringly tactical, the message was again loud and clear. The U.S. has more depth than any team in this tournament. That's most obvious in the front line, where Lloyd, Christen Press and Mallory Pugh would start for most teams in the world. As Heath, Morgan and Rapinoe did in the first game, the front line in this game set the tone by pressing Chile from the outset to break up that team's bunker mentality.

"For morale purposes and cohesion and the team and all that, it's fantastic," Ellis said. "You see the players celebrating each other again tonight. So in that purpose, it's a happy camp. From regards to load, it's a lot of games in this tournament if you want to go far in it. So in terms of the ability to take a game off of some legs, I think is hopefully a good thing."

A star in defeat

While American fans dominated the stands in Paris, Chilean fans made themselves heard with a rousing rendition of their national anthem, continuing to sing even after the recording in the stadium cut off. Once the game began, Christiane Endler gave them something to cheer, too.

"Endler was fantastic," Ellis said. "We knew that in terms of scouting her and have played her before and know her reputation in the club game -- playing in her home ground, really. ... Endler is always going to keep that team in the mix. Just a wonderful statement about the level of goalkeeping."

Chile's goalkeeper, who plays professionally for PSG, did all she could to keep the score from ballooning into something like the U.S. win against Thailand.

"She saved probably four or five goals that were heading in," Lloyd said. "She did a phenomenal job."

A much better organized and competitive team than Thailand, Chile is still years away from contending for world titles in women's soccer -- even if it gets the necessary support from the domestic football infrastructure long dominated by the men's game. But the generation to come already has a truly world-class player of its own to look up to during that journey.

For a stretch of time last year, Tierna Davidson looked like she had the inside track on a starting role next to Becky Sauerbrunn in the middle of the U.S. back line. Davidson's own injury woes, which came early in her junior season at Stanford, and Abby Dahlhemper's continued quality changed that. But in becoming the youngest U.S. World Cup starter since Tiffany Roberts in 1995, Davidson both showed off her versatility as an outside back against Chile and took a starring role in U.S. set piece success. It was Davidson, whose delivery perfectly teed up Ertz for the near-post header on one corner kick and gave Lloyd the delivery to run onto for the other corner kick goal.

"Those balls she played in -- she's got one of the sweetest left feet I've ever seen," Ellis said.

The only thing she did wrong was take a free kick from the end line too early. And she can be forgiven a little overzealousness. It was, after all, her first World Cup game.

"This is something I've been looking forward to for a long time," Davidson said. "But only recently it kind of came into a concrete idea, as opposed to a dream."

Just about the first bit of bad news incurred by the U.S. in the tournament came when Lindsey Horan picked up a yellow card midway through the first half. The midfielder again looked the part of one of the tournament's potential breakout stars in what was mostly a composed, aggressive performance -- save for the card. Now Ellis, who substituted Allie Long for Horan early in the second half will face a choice as to whether to risk her picking up a second yellow in the group finale against Sweden and being suspended for the first elimination round game.

The U.S. had trouble with that in the last World Cup, losing Lauren Holiday and Rapinoe for the quarterfinal because of accumulated yellows. Then again, with both Sam Mewis and Lavelle kept on the bench at the start of Sunday's game, Ellis has rested options.