Liverpool the best option for De Ligt, but expect him to join PSG 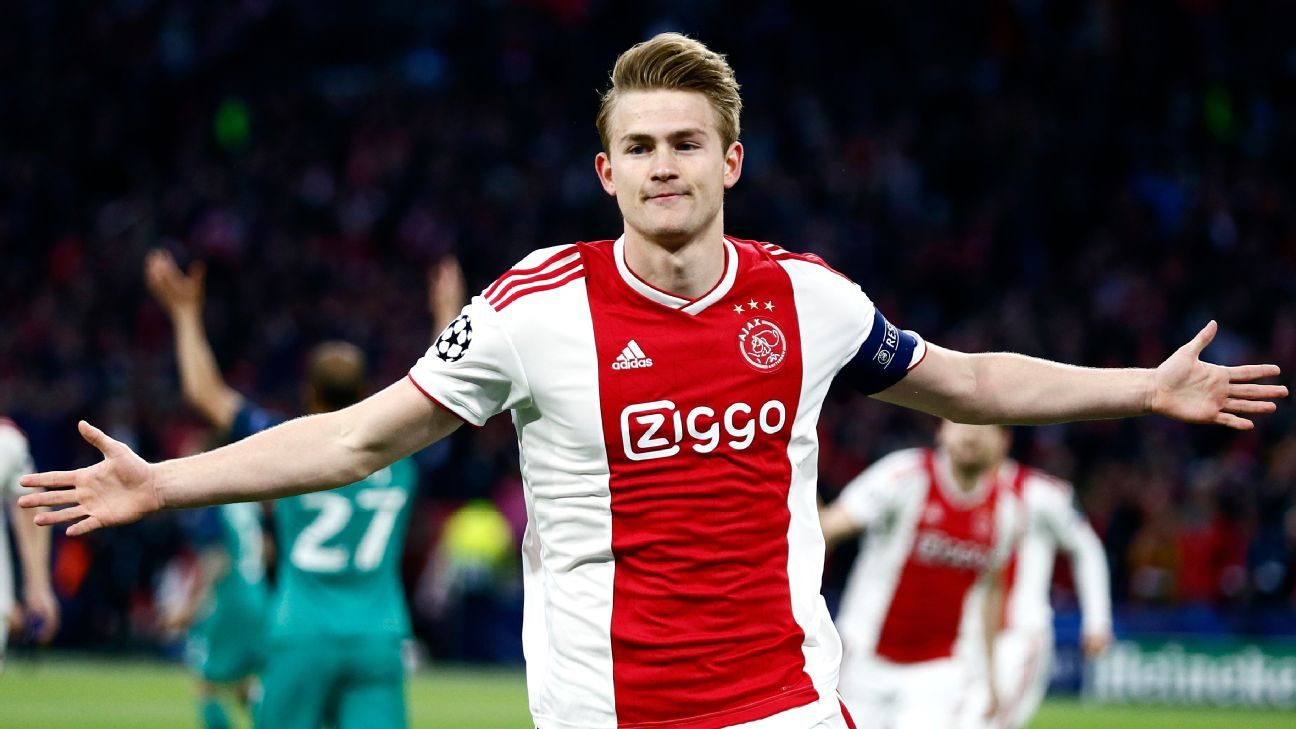 Matthijs de Ligt has emerged as the hottest property in Europe during this summer's transfer window after captaining Ajax to the Champions League semifinals at just 19 years old.

The centre-back, who is also a regular in Ronald Koeman's Netherlands team, has been mainly tracked by Barcelona, Manchester United and Paris Saint-Germain, with speculation also linking him to Juventus, Manchester City, Liverpool and Bayern Munich. De Ligt has said he will now decide his next move while on holiday this month, but with the world at his feet and Europe's top clubs all queuing up to sign him, which would be the best move in terms of progressing his career?

ESPN FC has weighed up the pros and cons of each potential buyer.

PROS: First of all, you get Lionel Messi as a teammate, and that is a huge selling point, but with Gerard Pique now 32, Barca need to rebuild at the back.

De Ligt could develop into the kingpin of the Barcelona defence for the next 10 years and moving this summer means he could also take his game to another level by playing alongside Pique for at least one season. At Camp Nou, De Ligt would be virtually guaranteed to win big trophies and play in the Champions League every year alongside his Ajax and Netherlands teammate, Frenkie de Jong.

CONS: De Ligt has shown himself to be vulnerable on the turn when being attacked by quick, nimble forwards, and La Liga is not short on attacking players who could expose his shortcomings.

There would be no guarantees of regular football at Camp Nou either, with the likes of Pique, Samuel Umtiti and Clement Lenglet all capable of keeping him out of the team. At right-back, where he can also operate, he would be up against the impressive Nelson Semedo. There are also long-term questions about how well Barca are equipped to succeed without Messi. The Champions League defeat against Liverpool was a humbling loss and it showed that even with Messi, Barca might be set for a period of transition.

PROS: Sources have told ESPN that PSG have moved ahead of Barcelona in the race to sign De Ligt, who knows he would win a stack of domestic medals with the Qatari-owned French champions. Learning the game alongside Thiago Silva would also appeal to De Ligt, who would be confident of regular football both in Ligue 1 and the Champions League. While he will not be short of big offers this summer, a move to PSG would perhaps be the most lucrative of all.

CONS: From a football perspective, De Ligt would not be playing in one of Europe's top leagues and he would risk his development stalling due to a lack of competitiveness in France. Ligue 1 lacks the kudos of the Premier League or La Liga and PSG are also a club that can't match their European rivals when it comes to history or tradition either.

Neymar and Kylian Mbappe have both gone to Paris for big money in recent years but could depart for a greater challenge outside the one-horse race of French football.

PROS: A move to Old Trafford would be hugely lucrative for De Ligt, and he would go there knowing he would play every week and have the defence built around him.

United are in a difficult place right now but they are still one of the three biggest clubs in the world, alongside Real Madrid and Barcelona, and De Ligt could be enticed by the challenge of leading the team back to the summit of the game. For a player blessed with such imposing physical attributes, the Premier League would be perfectly suited to his game.

CONS: United appear to be locked in a downward spiral, with the team facing a lengthy rebuild after six years of bad decisions since the retirement of Sir Alex Ferguson in 2013. Domestically, Liverpool and Manchester City have left United trailing in their wake and Ole Gunnar Solskjaer's team are not even in the Champions League next season.

A move to Old Trafford right now makes little sense for De Ligt, although at 19, he could spend two years at United and still be able to get out with his best years ahead of him if the move failed to work out.

PROS: Vincent Kompany's decision to leave City for a move into management with Anderlecht has opened up a vacancy for a commanding centre-back at the Etihad.

The opportunity to work under coach Pep Guardiola would be another attraction for De Ligt and, with City at the peak of their powers, he could look forward to winning major honours in the blue half of Manchester. City have become a major force under Abu Dhabi ownership and the Dutchman would be joining one of Europe's most powerful clubs.

CONS: The struggles of John Stones at City, who has fallen out of favour under Guardiola despite arriving to great fanfare in 2016, might be a warning to De Ligt that the City manager's patience does not always give a young player time to develop.

There would also be concerns over whether De Ligt's playing style would fit into Guardiola's high-intensity approach. His upbringing at passing football specialists Ajax would help but he might not be what the manager is looking for.

PROS: The prospect of forging a defensive partnership with Netherlands captain Virgil van Dijk at Anfield would be a compelling one for De Ligt. And, as Champions League winners, Liverpool can offer him the chance to sign for the best team in Europe and one that seems to be on the brink of a successful new era under Jurgen Klopp.

Liverpool are a young, exciting squad and De Ligt could take himself, and the team, to a new level if he moved to Anfield.

CONS: It's difficult to find a downside of moving to Liverpool right now, although the one area where they may struggle to compete with their rivals is on a financial level. De Ligt could guarantee bigger wages elsewhere.

Despite winning the Champions League, Liverpool have not won the league title since 1990, and if Manchester City continue to dominate, the defender might find it easier to win major honours elsewhere.

ESPN FC's Alejandro Moreno sifts through the latest transfer rumours, including where Matthijs de Ligt will land in the summer transfer window.

PROS: Playing for the biggest and wealthiest club in Germany would guarantee De Ligt both a bulging pay packet and a well-stocked trophy cabinet. Bayern are pretty much a certainty to play in the Champions League every season and they also expect to win it, so De Ligt would be in the shake-up for big honours. And although Bayern are in a rebuilding process, their dominance of German football ensures that he would still be winning during their transitional period.

CONS: In a similar fashion to PSG in France, Bayern have killed off domestic competition in the Bundesliga (though only just this season), so De Ligt might be moving to a comfort zone if he chose to leave Ajax for them.

There is uncertainty over the long-term future of coach Niko Kovac and the departures of Arjen Robben and Franck Ribery, and the potential sale of Mats Hummels, have left several question marks hovering over the Allianz Arena.

PROS: Just as signing for Barcelona would enable De Ligt to play with Lionel Messi, a move to Juventus would give the youngster the opportunity play and train with Cristiano Ronaldo.

Defensively, a move to Turin would be like going to a finishing school for centre-back by learning from Giorgio Chiellini and Leonardo Bonucci. Financially, Juve are big payers, and their dominance of Serie A should ensure plenty of winners' medals for De Ligt.

CONS: The appointment of Maurizio Sarri as Juventus coach has raised eyebrows due to his playing style and lack of a title win on his C.V., so De Ligt could be moving to Juve just as their domestic dominance begins to wane.

As he displayed at Chelsea, Sarri prefers experienced players to emerging youngsters, so De Ligt might find himself relegated to a watching role behind Chiellini and Bonucci.

Wherever De Ligt ends up this summer, he will find himself at a major club and with a hugely increased pay packet. But if he could hand-pick his best destination, Liverpool would be top of the pile due to the strength of the team and the opportunity to play alongside international teammate Van Dijk.

The smart money is on De Ligt moving to PSG, who look to have outbid Barcelona, but Liverpool would be the best option for the Ajax defender.

More in this category: « Ramsey has played last Arsenal match - Emery PSG chief: 'Nobody forced Neymar to sign for us' »
back to top