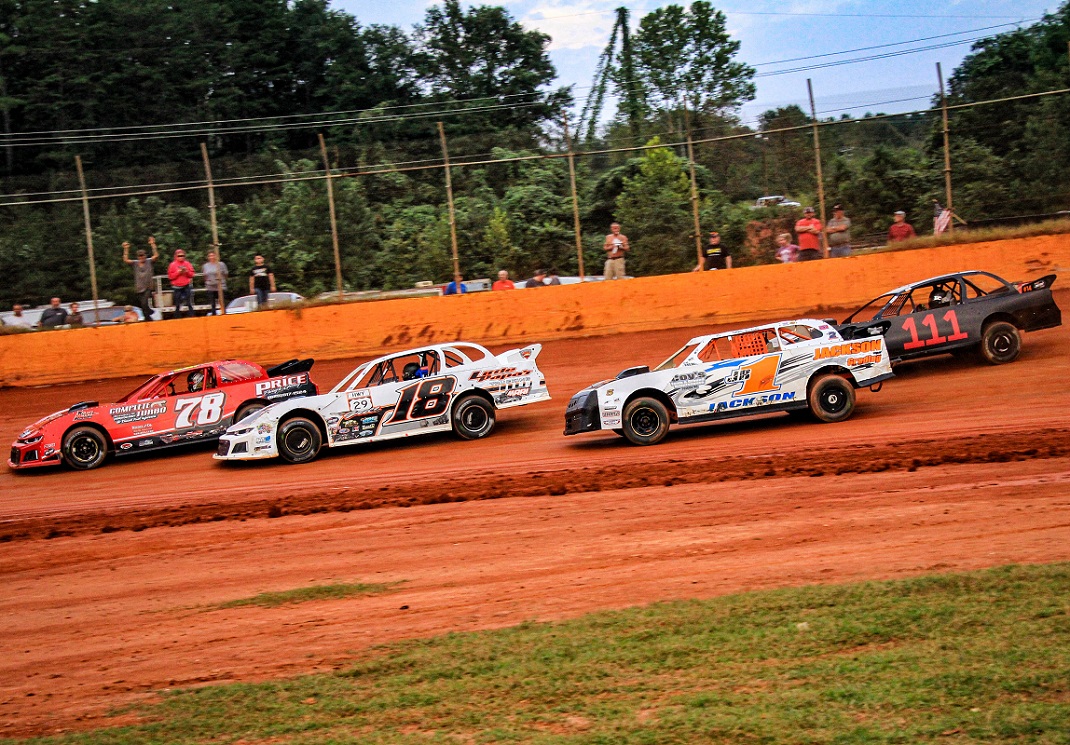 GASTONIA, N.C. — Mid-East Motorsports is putting up a major payday for Friday’s Mid-East Mania at Carolina Speedway and all the action will be aired live by SPEED SPORT Network affiliate Pit Row TV.

The inaugural Mid-East Challenge Bonus will award $25,000 to a driver who can sweep the feature victories in all three of Mid-East Motorsports’ touring divisions — 602 late models, 602 modifieds and street stocks — at the three-eighths-mile clay oval in North Carolina.

When adding in the winner’s shares for each race and the associated bonuses, a driver sweeping the 602 late model, 602 modified and street stock wins at Carolina Friday would leave with a payday in excess of $30,000.

A considerable amount of buzz has surrounded the weeks leading up to the event, with Mid-East Motorsports co-founder Jason Walls “caught off guard” by the enthusiasm for the program.

“I knew that I needed to do something to get people there, other than just a normal, weekly-type show with a little extra [money] for the tour race,” Walls told SPEED SPORT. “I just knew that we needed to get something going to get a little bit more excitement around it. We have very strong relationships with our sponsors and partners, and I ran it by all of them … just joking, honestly, saying ‘Hey, wouldn’t it be cool if we could do this?’ and the very next day, pretty much every one of them called me back and said they wanted to make this happen. So, now, here we are.

“I never expected the amount of attention this has gotten even before the race, but it’s really cool to see and we’re hoping for a great turnout of drivers and fans on Friday night.”

While the bonus money has been a major talking point, so have the drivers rumored to be chasing the cash — even if mystery still swirls around who may actually compete in the three races.

World of Outlaws Late Model Series winner and well-known modified star Ricky Thornton Jr. is one of several notable drivers who has, at the very least, inquired about the prospect of racing for the five-figure bonus this weekend. Kyle Strickler is another star who expressed interest in the challenge.

However, Walls admitted that the final lineup of challengers is still unknown.

“Everybody has been so secretive about this deal, even to me, that it’s going to be interesting to see who shows up with rides in all three classes,” Walls admitted. “I put feelers out there to try to get people to tell me stuff, but honestly there’s not but about two or three guys that have personally told me that they’re doing it … but there’s a lot of speculation that eight guys are committed to trying for it. Dalton Wilson, who won the (Carolina) Clash (Late Model Series) race at Friendship (Speedway) recently, is right at the top of the list for all three, as is Jesse Rockett.

“When we were at Bristol for the Dirt Nationals, Ricky asked me about it, and we talked about it some,” Walls noted. “I know that he can come up with a modified ride pretty easy and he can come up with a late model car pretty easy, but the street stock he was still doing some research on. They go to Hagerstown (Speedway) with the Lucas Oil Late Model Series on Saturday, so they’re free on Friday, but I don’t know what his status is after he took a bit of a ride there at Bristol last weekend.

“Kyle Strickler was asked by somebody in all three divisions to come run a car, but I’ve not heard anything out of that as to whether it will happen, so we’ll have to see when we get to Friday night. This has truly been one of the best kept secrets I’ve ever seen in racing, as to who is actually doing what this Friday and what classes they may or may not be racing in.”

Beyond Friday’s Mid-East Mania event, Walls is optimistic about the future direction for the Mid-East sanctioning body, which he manages alongside business partner Josh Hellams.

“It’s been a pretty great ride so far,” reflected Walls. “Our modified deal is on year five and it’s nearly doubled every year from year one. We started with a four-year [plan] and about 40 cars at three race tracks and last year we had 172 different car run a race across 14 different race tracks, with a 20-race tour. So that’s been amazing to watch. The street stock program is pretty strong in this area because we’re pretty street stock rich in the Southeast and under our package, everybody with a street stock car is legal to come race in some shape or form. There’s a rules package for everyone.

“And with the 602 late models, this is our first year running that program under the Mid-East banner, but I think in a couple of years, it will be the future of late models … at least weekly, in this region,” Walls added. “I think it’s pretty stout and we’re looking forward to showcasing what we bring to the table at Carolina Speedway this weekend. It’s an exciting time for our touring series.”

Friday’s Mid-East Mania at Carolina Speedway can be streamed with a $24.99 monthly subscription to Pit Row TV. The broadcast begins at 8 p.m.

More in this category: « Newell Aims To Capitalize On Early Wheatland Success F-1 Confirms Addition Of Miami Grand Prix »
back to top