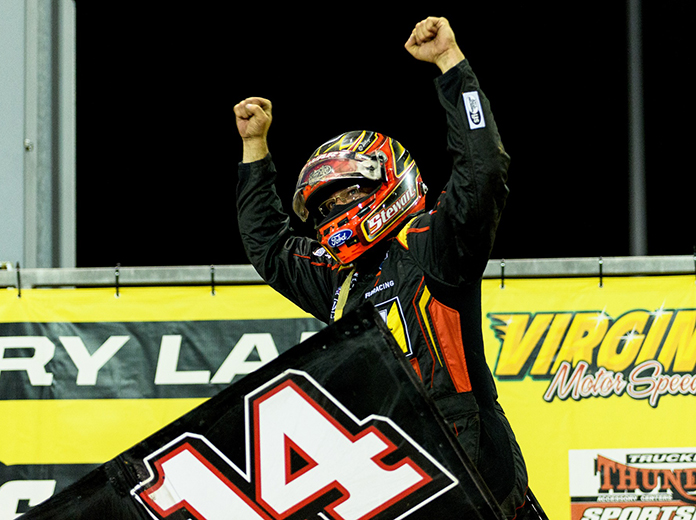 JAMAICA, Va. – Just as Justin Peck was about to secure his second consecutive FloRacing All Star Circuit of Champions presented by Mobil 1 victory Thursday night at Virginia Motor Speedway, disaster struck in the form of a flat right rear tire.

Peck was forced to surrender the lead to three-time NASCAR Cup Series champion Tony Stewart as the field raced out of turn four on the final lap, allowing Stewart to claim his first All Star victory of the season and sixth of his career.

Stewart earned a $12,000 payday for his efforts following his first victory with the series since a $26,000 victory in 2019 during the Rayce Rudeen Foundation Race at Iowa’s 34 Raceway.

Stewart, who started eighth on the feature grid by way of heat race victory and an eventual eighth-place dash finish, not only took advantage of Peck’s misfortune by being in the right place at the right time, but the pilot of the Tony Stewart/Curb-Agajanian Racing No. 14 sprint car also survived a 30-lap battle with tire wear, as an abrasive racing surface made navigating Virginia Motor Speedway’s high-paced oval plenty risky.

Adding to the drama, the final lap of the race was conducted in green-checkered fashion, as a caution on the final circuit forced the field to restack for a final lunge toward the finish.

“We weren’t the fastest car by any means. We kinda figured out early that it was going to be a tricky surface and ultimately a challenge for tires. I just tried to run my car straighter than those guys ahead of me,” Tony Stewart said, who now owns All Star victories at six different facilities. “We could see that (Justin Peck’s) tire was getting pretty worn. I could see the cords so I told myself if he can run the car that hard and make it work, good for him. Being second while trying to save tires was going to be a good night for us.”

Although Stewart and Peck were the focal point for the final lap dash, Cory Eliason was the man in charge for much of the main event and led the first 25 circuits before a cut right rear tire forced the Rudeen Racing entry to go to the work area.

As aforementioned, the top spot was inherited by Peck, who had battled his way to second from sixth around the likes of Antony Macri and Ian Madsen, just to name a few. Before Eliason’s misfortune, and on several occasions, Peck pressured Eliason’s back bumper, making a few attempts to dive below Eliason’s No. 26 in turns three and four.

“I got to second and that is when I knew I was as good as Cory (Eliason). I thought maybe I could get a run on him, but then he had that tire go down so we really didn’t get the opportunity to really race for the lead” Justin Peck explained, who remains in control of the current All Star Circuit of Champions title chase. “My team really had me hooked up tonight. That allowed me to do what I needed to do.”