Davenport Leads Them All In West Virginia 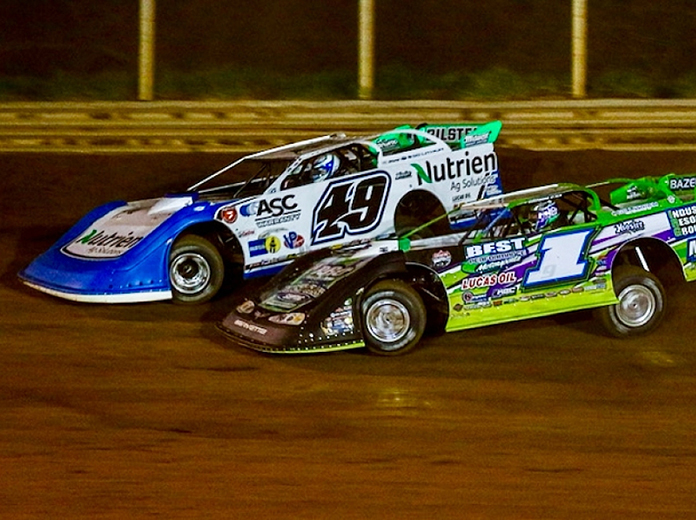 MIDDLEBOURNE, W.Va. — Jonathan Davenport led all 40 laps to earn $10,000 at Tyler County Speedway on Thursday after repelling a furious charge by Tyler Erb during the final laps.

But Davenport said his Double L Motorsports Longhorn Chassis can be even better after the team discovered an issue that held them back last weekend at a dirt-covered Bristol (Tenn.) Motor Speedway.

“I still think a little bit of the (same) gremlins (hampered) us tonight,” Davenport said after he struggled to turn entering the corners. “We’re just fighting a few issues, but once we get them figured out, it’s going to be a helluva year.”

Erb narrowly missed landing a successful slide job on Davenport with five laps remaining but then never got closer in finishing seven-tenths of a second behind at the checkers while NASCAR and open-wheel star Kyle Larson was third in his first-ever competition in West Virginia. Mason Zeigler and polesitter Jacob Hawkins who lowered the track record in time trials with a lap of 12.080 seconds, rounded out the top five.

Davenport has designs on a “helluva year,” but with Tyler County giving him his sixth overall victory, Davenport’s year is already better than his subpar 2020 when he tallied five victories.

“It means a lot to win the first Flo race,” the outside front-row starter said in victory lane. “Tyler County’s always a great place to come to and race. We always get a lot of great support from the fans and I just can’t wait to get on to the rest of the weekend.”

Davenport kept his competitors in check most of the 40-lapper, which had eight cautions over the first 20 laps. When facing traffic in the late stages, he had to get up on the wheel to fight off the fourth-starting Erb’s feisty challenges.

The winner had a scary moment heading for the white flag when the rear of his car briefly connected the the front of Ryan King’s lapped car. Davenport was aiming to get some breathing room and said he didn’t mean to make contact.

“I knew Terbo was probably going to cut across (and) back under me right there,” Davenport said, who won his fifth Late Model event at Tyler County, where he earned $25,000 in 2017’s Hillbilly 100 on the Lucas Oil Late Model Dirt Series. “I knew we was coming to the white, so I just tried to get clear racetrack there.”

Erb, who was second or third the entire distance except for the first lap, gave it all he had.

“I did the best I could. J.D. did a good job,” Erb said. “I felt like, I just kind of figured out how to run the top in (turns) three and four before he did. (The frontrunners’ crew chiefs) they’re down there (in the infield), it was like a horse-jockey match if you were paying attention (to their directions for drivers). He’d go high, I’d go low, we’d go low and high. It was run. We had a really good car.

“It’s something to build off of. I love coming here. Thanks for everybody coming out (when) it’s cold on a Thursday night. But this was an awesome deal and, we’ll see you at Atomic next week.”

Larson struggled on restarts and bemoaned losing a heat race to Davenport that would’ve put him on the front row for the feature in his K&L Rumley car.

“I needed to really win the heat race — I think we’d have had a really good shot to win,” Larson said. “I felt just as good if not better than the guys in front of me. (The track surface) just gets so dirty and hard to kind of find a clean lane, and see, too. It’s pretty dark here with the dust, but (it’s) a really cool place.”

The first of the feature’s eight cautions came on the seventh lap when Larson got sideways in turn four, triggering a Devin Moran-Mike Marlar scramble.

Six more yellows came consecutively on laps 14-17. Boom Briggs slowed for the first one, retiring to the infield. A lap later Kyle Bond ended up facing the wrong direction on the frontstretch as the same time Tyler Evans had trouble. Steve Casebolt drew back-to-back cautions on lap 16 (and Bond was checked out for nosepiece damage). The lap-17 cautions appeared when Ryan King’s hood flew up, blocking his vision, and again for a Bond spin.

The eighth and final yellow came for Kyle Thomas, the track’s season-opening winner who got into the guardrail at the halfway point.