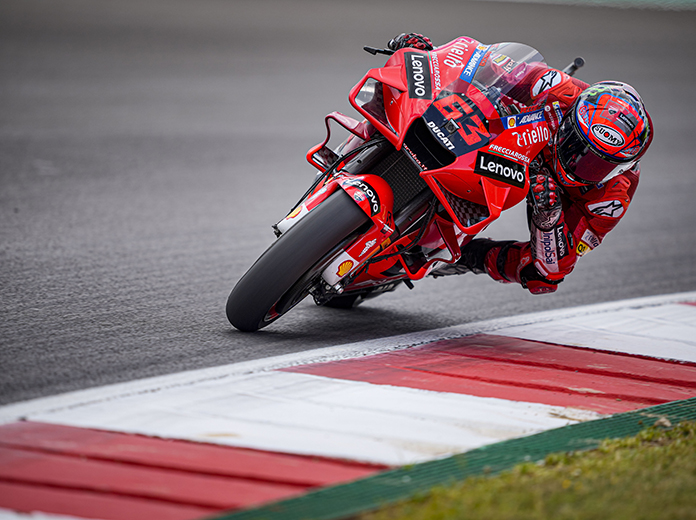 The Ducati Lenovo Team rider was the only competitor to slip below the 1:40 bracket on the opening day of the MotoGP weekend in Portugal. His best lap was a 1:39.866, which put him .340 seconds up on Monster Energy Yamaha competitor Fabio Quartararo.

“I’m delighted with the work done during this first day. In FP2, my feeling with the bike was excellent, and it allowed me to set the fastest time even though the track conditions weren’t perfect,” said Bagnaia. “Tomorrow the temperatures will be higher, and the grip levels too. It will be important to get into Q2 right away and, above all, to have a consistent pace in FP4.”

“It was a great day, a great feeling to be back in MotoGP. On the first run the track wasn’t so good but I felt good on the bike,” Marquez said. “I felt better in the morning because the arm was fresh, it was rested, and I had good power. In the afternoon I had to work more to warm up the arm and I could feel it was more tired. But we are in a better situation than what we were expecting before the weekend. I am riding the bike, following my own way and the lap times are coming well. The main question for me is still how the arm will react over the weekend. It is great to be back, we have worked very hard for this moment and it’s great to achieve it.”

More in this category: « OCRS Sprints Rained Out In Oklahoma F-1 Confirms Addition Of Miami Grand Prix »
back to top