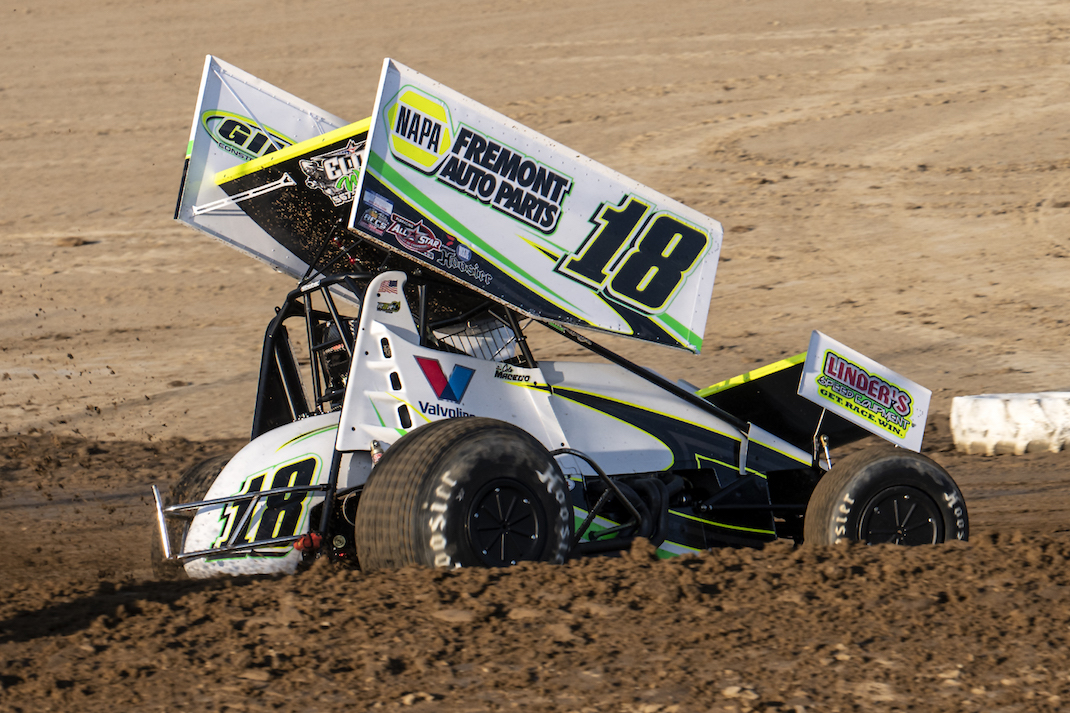 ATTICA, Ohio — California’s Cole Macedo has been so close to winning a 410 sprint car feature at Attica Raceway Park only to suffer bad luck. He tossed that all aside Friday with a victory at the third-mile dirt track.

Macedo took the lead from Brian Smith at the half-way point of the 30-lap feature and mastered lapped traffic for the victory aboard the Ray Brooks Racing No. 18.

“I love racing for these guys. They’ve been working their tails off and I’ve been making mistakes and we’ve just been trying to put nights together and it finally paid off. I knew if I kept my nose clean my car was good enough to keep pulling away from guys. I could run the middle, the top, the bottom…everywhere. After five laps my car really came in. I played with the wing a little but my guys did a really good job,” said Macedo.

Gary Taylor and Brian Smith brought the field to green for the 30-lap 410 sprint feature with Taylor gaining the advantage over Smith, Macedo, Travis Philo, Cale Conley, Trey Jacobs and Brandon Spithaler. Taylor set the early pace but by leap eight Smith was closing and took the lead two circuits later, Macedo took second on lap 11 just before the event’s only caution flew.

On the restart Smith maintained the advantage though Macedo was applying the pressure with Taylor locked in a fight with Philo, Spithaler and Jacobs for third. Macedo led lap 15 by half a car length but then began to pull away.

The leader encountered lapped traffic with eight laps to go but was able to maneuver through while Smith comfortably ran in second with Philo and Spithaler battling for third. Spithaler, who picked up his first ever Attica win last week, took third on lap 23 and quickly closed on Smith.

Macedo drove to the checkers while Smith was able to hold off Spithaler for the runner-up finish with Philo and Jacobs rounding out the top five. Buddy Kofoid drove from 17th to a sixth-place finish to earn the hard charger honors.

In another fantastic Propane.com/Dirt Nerds Podcast UMP Late Model feature, Matt Irey held off a late race charge from the previous week’s winner Ryan Markham and near catastrophe with two laps to go when a lapped car spun right in front of him to score his first win of the season. It was Irey’s sixth career Attica victory.

A two-time Attica 305 champion, Jamie Miller has been knocking on the door for a win all season. He utilized the new qualifying format to perfection, started on the pole of the 25 lap Fremont Fence feature and led every lap for his 28th career victory in the division aboard the Ryan French owned No. 26.