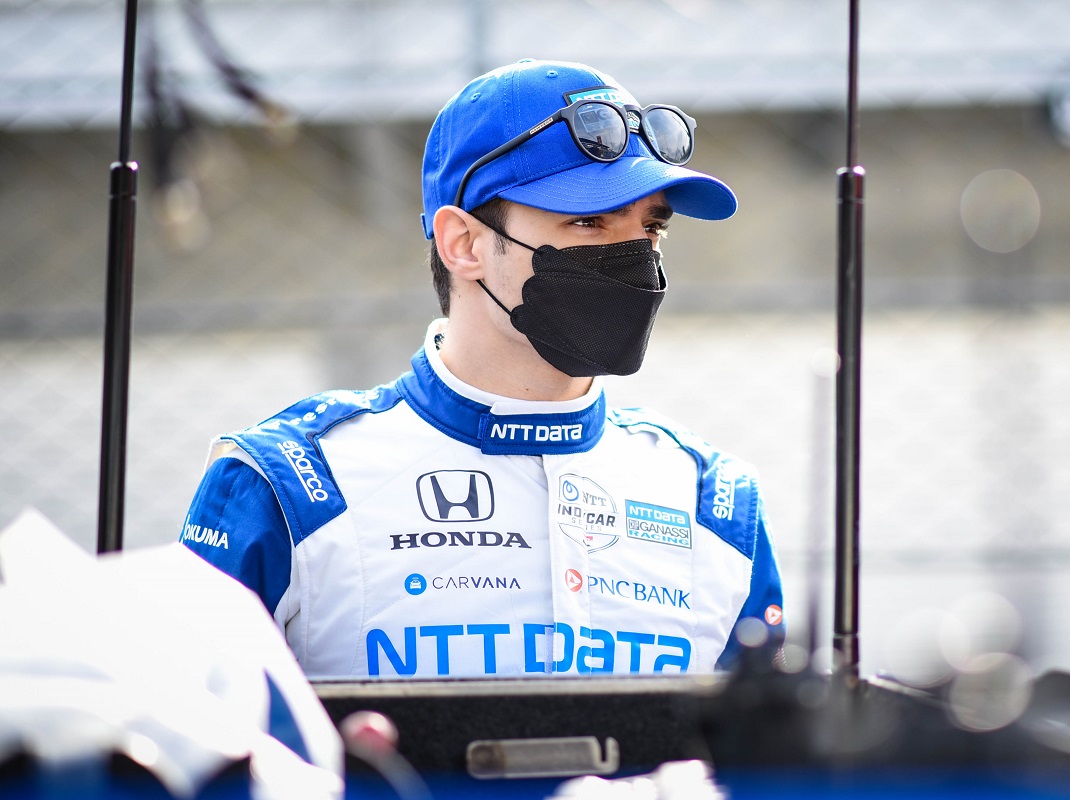 The slowest time in the 24-car field in the first practice session was seven-time NASCAR Cup Series champion and IndyCar Series rookie driver Jimmie Johnson. His time was 1:07.9509 in the No. 48 Carvana Chip Ganassi Racing Honda.

The 2.3-mile, 17-turn road course was recently repaved, leading to some very fast speeds in the first practice session.

Felix Rosenqvist brought out the red flag when he stopped at pit entrance after hitting the outside pit wall barrier, driver’s right with 7:25 left in the session. Rosenqvist drives the No. 7 Arrow McLaren SP Chevrolet.

“As I was coming to the pits, I wasn’t trying to put the pit speed limiter on, but the steering wheel snapped out of my hands and I lost it,” Rosenqvist explained. “I made a big mistake.”

Very early in the session, Johnson briefly drove off course and kicked up some dust as he was attempting to get up to speed in his No. 48 Carvana Chip Ganassi Racing Honda.

In fact, all three of the high-profile IndyCar rookies were near the bottom of the timing monitor after 25 minutes of green flag practice.

Three-time Virgin Australia Supercars champion Scott McLaughlin was 19th, Formula One veteran Roman Grosjean was 20th and Johnson was 23th out of 24 cars in the first half of practice.

McLaughlin, however, picked up the pace to run a lap at 1:06.7499 in the No. 3 PPG Chevrolet for Team Penske, good enough for eighth place in the end.

Grosjean ended the first practice 21st and Johnson was slowest in the 24-car field.

At the top of the timing monitor was second-year IndyCar Series driver Palou of Spain, who had a fast time of 1:06.4721.

Andretti Autosport’s Colton Herta was second in the No. 26 Honda at 1:06.4897, with three-time Honda Indy Grand Prix of Alabama winner Josef Newgarden of Team Penske third at 1:06.4957.

Dixon was fourth at 1:06.5524 in the No. 9 PNC Bank Honda with Arrow McLaren SP’s Pato O’Ward rounding out the top five.

After Rosenqvist’s incident, the green flag waved with four minutes remaining. But the previous times all held up at the conclusion of the session.

There is one more practice session scheduled for 2:40 ET and qualifications are set for 5:55 p.m. ET.

More in this category: « Quartararo Flies To Portimao MotoGP Pole F-1 Confirms Addition Of Miami Grand Prix »
back to top