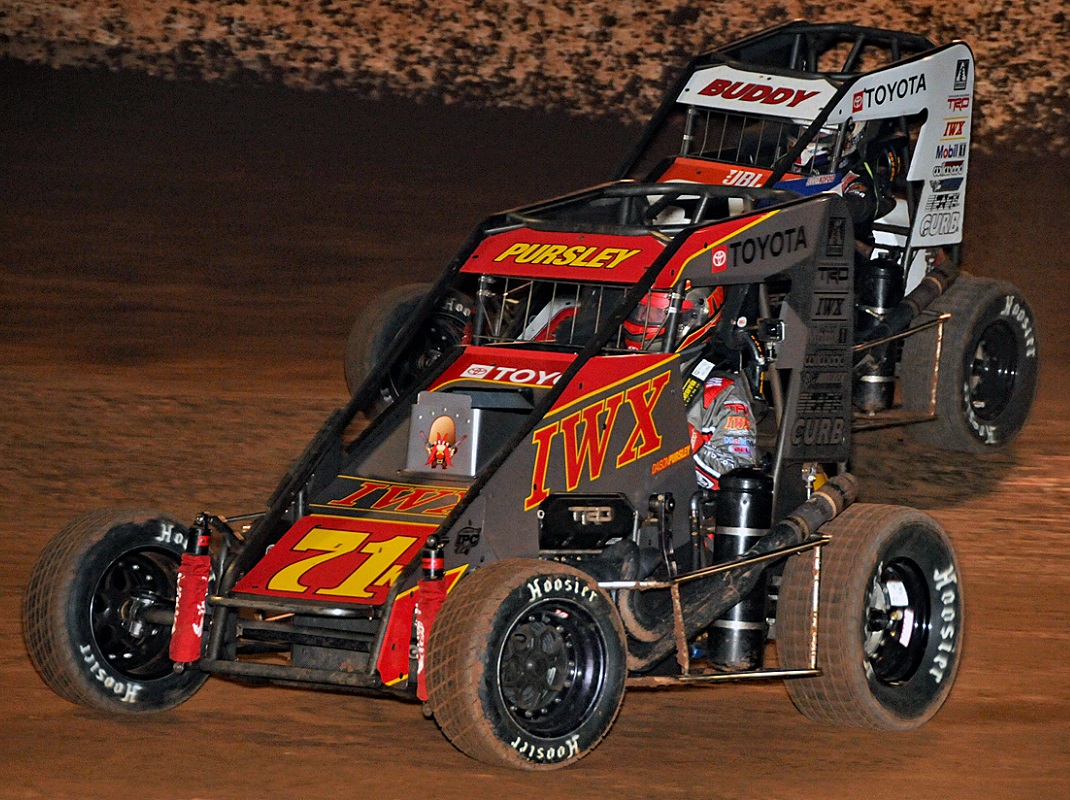 WHEATLAND, Mo. – One of the real bummers for Daison Pursley last year was the cancellation of the Impact Signs, Awnings and Wraps Open Wheel Showdown at Lucas Oil Speedway due to the COVID-19 pandemic.

Pursley, a 16-year-old Oklahoma native considered one of midget racing’s up-and-coming stars, had been looking forward to only his second appearance at the speedway.

“Going to Lucas Oil Speedway is definitely cool. It’s one of the nicest facilities that we go to,” Pursley said. “Not being able to go there last year with POWRi was terrible. Going there (this weekend) for my second time, in my third year of running in the midgets, I feel like we’ll go in with a lot of confidence and I look forward to it.”

Pursley, who drives for the legendary Keith Kunz/Curb-Agajanian Motorsports team, will be part of the 10th annual Impact Signs, Awnings and Wraps Open Wheel Showdown on Saturday night.

Pursley already has six feature wins this year, including a pair in his non-wing outlaw. He also has a second place and one third in the POWRi National Midget League and enters the weekend 100 points back of teammate Buddy Kofoid.

“It’s been really, really good,” Pursley said of his start to the season. “Me and Buddy were up on the podium the first three races. I haven’t clicked off that first POWRi win yet, but hopefully this weekend the rain stays away and we’ll have a shot at it.”

Even though he’s only 16, Pursley is now the most-tenured member of Kunz’s powerhouse driver roster. He called that fact “crazy to think about.”

To be able to run for them three years now is something I’ll cherish forever and hopefully I’ll continue to have a little more success and build off that,” Pursley tipped.

Pursley, from Locust Grove, Okla., grew up around racing, as his father and uncle both raced. He became a big winner in micro sprints and went on to win the 2016 and 2017 Midwest NOW600 USAC championship and the 2017 USAC Restricted national title.

The youngster hooked up to run midgets for Kunz as a 14-year-old, but the foundation for the pairing might have been set several years earlier, when Pursley attended the Chili Bowl Nationals in Tulsa, first met Kunz and then declared someday he would drive for him.

“Then we were able to win the USAC championship in the micro division in 2017 and was able to go to the banquet in Indianapolis,” he said. “I walked up to him with my trophy and introduced myself again. I told him again that I was going to drive for him one day. Now here we are a couple of years later and I’m driving one of his cars.

“To drive for a legendary guy like Keith is really cool. Everyone on the team is incredible to work for. All the crew guys have driven micros or midgets before and to be able to go and ask them all kind of questions, it’s cool to have all that knowledge.”

As for how much he’s improved since 2019 – when he came through the B-Feature and finished 10th in the Open Wheel Showdown main event at Lucas Oil Speedway – Pursley described his growth as “extreme.”

“I remember my first year, I felt it went really good the first 10 races then I kind of found myself in a slump,” Pursley said. “I don’t know if that was part of the learning process or what-not, but I felt my first handful of races went really good. I was only old enough to run POWRi in 2019 and ran POWRi and knew some of the tracks from running Micros and we were able to pick off a couple of good finishes. We ran like fourth in points. Our first year went good.

“Last year, my first full season of USAC midgets and POWRi, I didn’t really get the full-feel of it because of COVID-19,” he added. “We were able to knock off a couple of solid top-5s in USAC and to get our first win in POWRi late last year was something that I’ll remember forever.”

Anyone who is selected to drive for Kunz knows of the inevitable comparisons to other young stars who came before them who advanced to NASCAR. That fact is not lost upon Pursley and he admits that he sometimes dreams of following a similar path.

“I definitely want to keep my focus on what’s ahead and focus on this season of course, but I really can’t tell you where my career is headed,” Pursley said. “I hope it’s to the Cup side. I feel like that’s my dream and to be able to hooked up with Keith Kunz and Toyota, it’s a blessing to be able to do that.

“To watch Kyle Larson and Christopher Bell on Sundays, after racing where I am today after only a few years ago, it’s definitely a goal of mine and a dream.”

More in this category: « HONOS Renews Backing Of MotoAmerica Superbikes PHOTOS: Honda Indy Grand Prix Of Alabama »
back to top