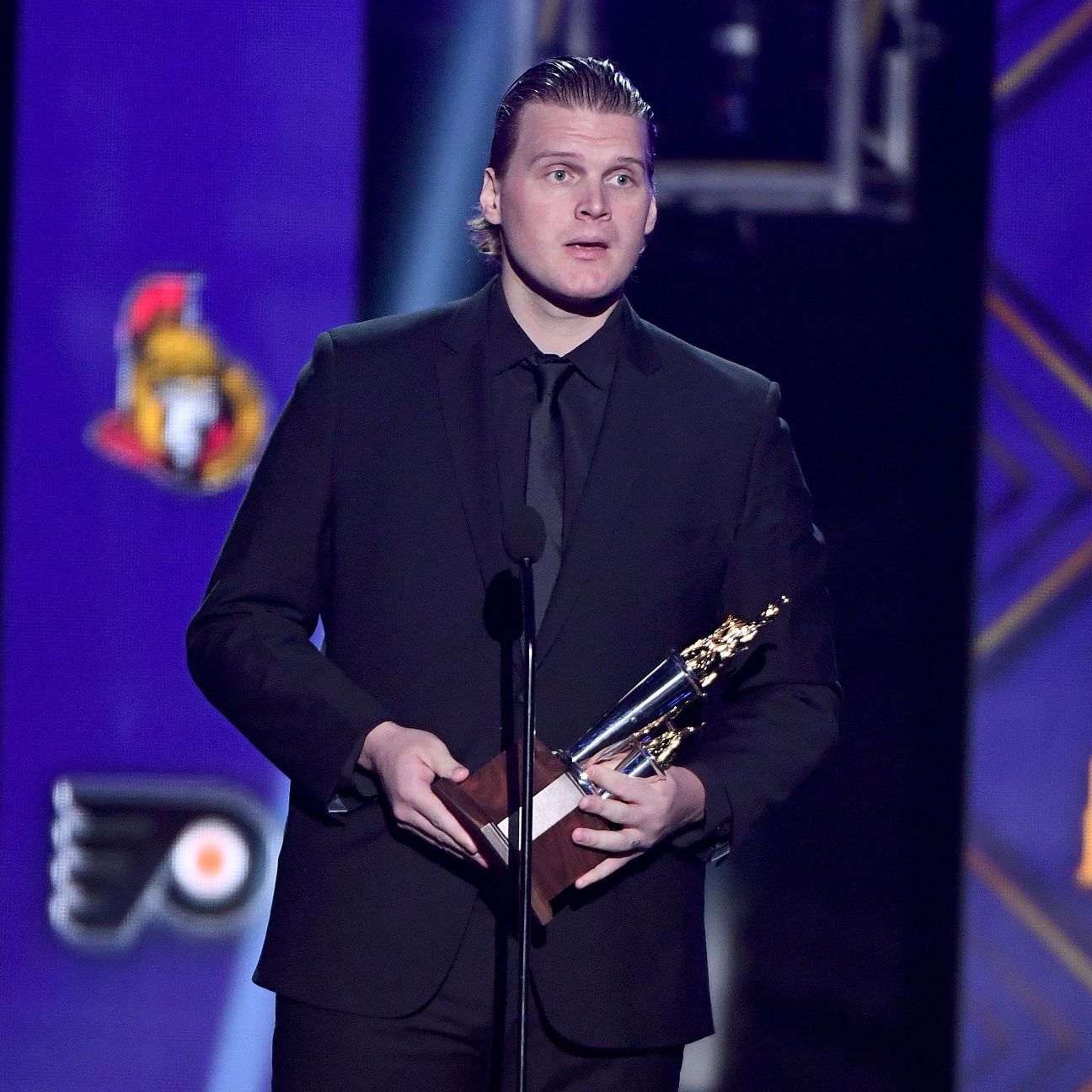 "I took that first step and it's been life changing for me," Lehner said in his acceptance speech at the NHL Awards show at Mandalay Bay on Wednesday. "Got to keep pushing, end the stigma. I'm not ashamed to say I'm mentally ill, but that doesn't mean I'm mentally weak."

Later, Lehner told reporters it was "pretty tough" to address the crowd and he was "fighting back tears."

"Now I'm diagnosed and medicated and I've learned a tremendous amount with how to deal with my issues," Lehner said. "I still have a lot to learn, but it's incredibly manageable and that's why a lot of people need to take that first step."

In September, the 27-year-old Lehner penned a first-person essay for the The Athletic that detailed an in-game panic attack he had while with the Buffalo Sabres last season. The Sabres sent Lehner home after his panic attack during an intermission of a March 29, 2018 game against the Detroit Red Wings. On the way home that night, Lehner said he stopped to buy beer and after a night of drinking, he told his wife, "I have to go away."

Lehner would never play another game for the Sabres. However, the episode led Lehner to seek treatment. He went to rehab where he says he was treated for addictions to alcohol and drugs and diagnosed as bipolar and ADHD with PTSD and trauma as well as having manic phases.

Lehner signed a one-year, $1.5 million deal with the Islanders in free agency after he was candid with the front office about what he was dealing with. Lehner and the Islanders then smashed their modest expectations this season. Lehner finished the season 25-13-5, with a 2.13 GAA, .930 save percentage and six shutouts as the Islanders, surprisingly, had the league's best defense and qualified for the playoffs -- then swept the Pittsburgh Penguins in the first round. Barry Trotz won the Jack Adams Award on Wednesday for Coach of the Year.

Lehner was a finalist for the Vezina Trophy and was recognized with teammate Thomas Greiss for the William M. Jennings Trophy for being the tandem that allowed the fewest goals in the NHL this season.

Lehner credits his support system -- which includes Islanders teammates, coaches and management, as well as his doctors -- with helping him stay on track.

Entrance into the NHL/NHLPA's Substance Abuse and Behavioral Health Program is kept confidential, though Lehner said there were benefits for him disclosing his participation. For example, Lehner said he recently had dinner with some of the doctors who treated him and they said other players have come forward, thanks to him.

"Obviously they don't tell me names or anything, but they've said a lot of people have reached out to them to start getting help," Lehner said. "Me being outspoken, and if that's just one person, then it's worth it."

Lehner admitted there were risks to being so frank about his condition -- especially financially, as it could affect negotiations or contracts going forward. It's why he believes many players have typically been hesitant to admit they need help.

"We as players in this league, GMs, whoever it might be, there needs to be some change to open it up," Lehner said. "Why it's been so successful for me this year, is because I was open with it. I think the program for the first time was able to work together with the team, it was a good collaboration. ... For a majority of people, they're not going to be open about it to the team. So the team part is going to be not involved because as soon as that comes to light, it's going to affect your financial future, it's going to affect negotiations, contract, or whatever it might be. It's going to turn into a risk."

Lehner, however, said the past year has been a highlight of his career.

"I've had such an incredible outpour of support," Lehner said. "There's been so many people who have contacted me, tried to contact me, who I haven't been able to get to yet. They're scared of taking that first step, scared of doing the things that are necessary to turn their lives around. ... Reaching them, that's incredibly rewarding."