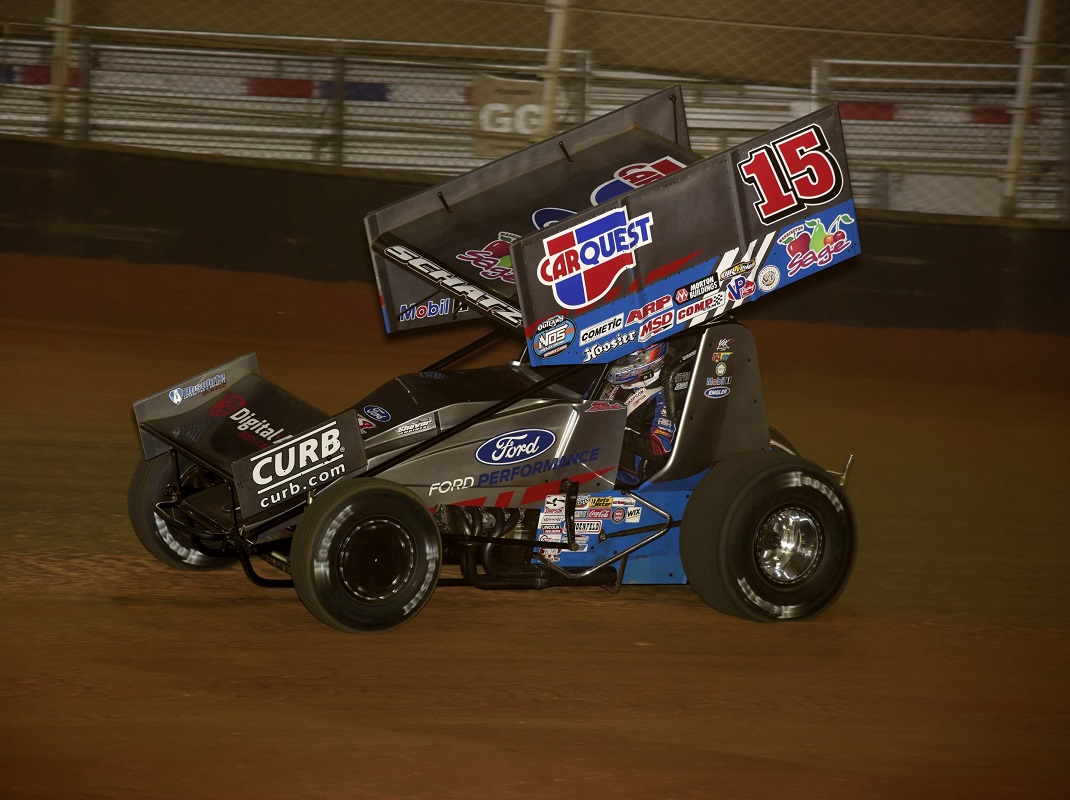 BRISTOL, Tenn. – While Donny Schatz genuinely enjoyed the thrill of racing at Bristol Motor Speedway again Friday, the frustrations of his year continued to mount.

Schatz finished fifth in night one of the World of Outlaws NOS Energy Sprint Car Series Bristol Throwdown and remains winless in 14 races on the circuit this season.

It’s the longest Schatz has started the year without a World of Outlaws win since 2011, when he went 16 races before racing to a victory on tour.

Being stuck on 299 series wins, one ]shy of joining Steve Kinser and Sammy Swindell as the only drivers to win 300 World of Outlaws sprint car features, weighs on him, too.

The bright side is that Schatz hung around the front on Friday and has a shot to change the trajectory of his season Sunday in the $25,000-to-win finale.

It’s just that some obstacles are harder to look past than others.

“We’ve had a lot of issues,” Schatz said. “We need the motors to run the way we need to at the end of the race, when it gets slick. They’re not the best at being able to throttle and accelerate. Once you slow down, it’s hard to get them back going. We’ve changed some things to try and fix that. We’ve unfortunately found the wrong direction.

“It’s not a simple fix to try and change those things at lightning speed.”

The 10-time World of Outlaws champion finds himself mired in seventh in the series standings, 178 points behind leader Brad Sweet.

Friday snapped five straight finishes outside the top 10 for Schatz, who moved around the track well enough for his first top-five result in over a month.

“They had a great race track,” Schatz said. “There were guys moving around. You just unfortunately can’t get rid of some of the dumb things that happen on the race track … guys brake-checking on starts.”

That’s when Schatz opened up about his latest frustration that hurt his night from eyes: the inside line not getting up to speed because of ill-timed starts.

“The series needs to do a better job of trying to eliminate those things,” Schatz said. “They don’t really rule that with an iron fist. And they should, especially around this place.

“When I mean that, I say, they told us before the night that they are going to go to single-file restarts because they feel it’s safe. I get that,” Schatz continued. “It really is. But the original start, you have to get past it. We had a terrible start in the dash. The car we were behind brake-checked when he started to go and did the same thing in the feature, and it affected the whole inside row.

“I have a choice,” Schatz added. “I can either smash into the guy in front of me or try to be sensible and not run into him. You might have to change that.”

Friday, in some ways, resembled Schatz’s season in a nutshell: periods of speed, but when he needed to make something happen, he just couldn’t for whatever reason.

Because of the mailing slowdown caused by COVID, it has been tougher than normal to order and upgrade resources. For Schatz and his No. 15 Tony Stewart/Curb-Agajanian Racing team, they have made due with what they have for the time being.

“I was kind of hoping to get win [No.] 300 tonight and get past that, but I guess we’ll have to focus on Sunday,” Schatz said after the race Friday. “We were pretty solid around here. I thought we had a real fast car there through the middle part of the race. I might have burned up the motor.

“Right now, it’s the worst time in the history of racing to try to get any parts from anybody,” Schatz noted. “We’re unfortunately the victim of circumstance.”

More in this category: « First Port Royal Win Since 2016 For Buckwalter Spring Run Invasion Finale Goes To Thorson »
back to top