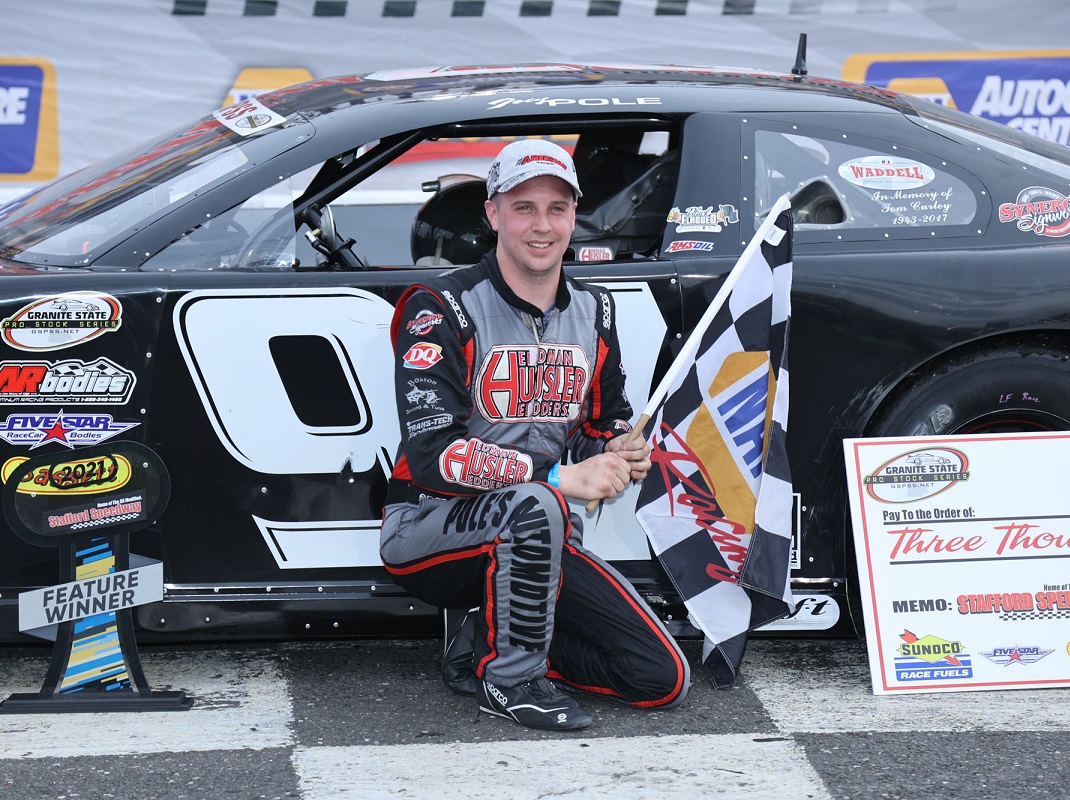 Eddie MacDonald took the lead from polesitter Josh King on the very first lap of the race.  Derek Griffith was third in the early going, with Polewarczyk and D.J. Shaw making up the top five.

Shaw got around Polewarczyk on lap four to move into fourth, and Derek Gluchacki took fifth as Polewarczyk slid back to seventh in line before the caution flew with four laps complete.

MacDonald took the lead on the restart with Griffith moving up to second. Gluchacki took third with Polewarczyk fourth and Shaw fifth. Casey Call was sixth while King slid all the way back to seventh in line.

The caution came back out with 11 laps complete as Mike O’Sullivan got into the turn one wall. Craig Bushey also had damage to the rear of his car after coming to a stop backwards on the track in the middle of turns one and two.

MacDonald took the lead back under green, while Polewarczyk and Shaw both got by Gluchacki to move into second and third place. Gluchacki was stuck in the outside groove and continued to slide backwards as Call took fourth and Dave Darling moved into fifth.

Polewarczyk took the lead from MacDonald on lap 15 at the line, while Gluchacki slid all the way back to 12th place before he could get back in line. Cory Casagrande was up to sixth at that point and started to apply pressure to Darling for fifth place.

Call slid up the track in turn one on lap 19, which allowed both Darling and Casagrande to move up to fourth and fifth as Call got back in line in sixth place. With 25 laps complete, the order saw Polewarczyk out front over, Shaw, MacDonald, Casagrande, and Darling.

Casagrande worked his way by Darling to move into third place on lap 34 as Polewarczyk continued to lead the race with Shaw running in second.

With 35 laps to go, Polwarczyk held a 1.5-second lead over Shaw with Casagrande, Darling and MacDonald making up the top five.

As the field began to navigate lapped traffic, Polewarczyk continued to slowly stretch out his lead over Shaw, while Darling got back by Casagrande to move into third place with MacDonald in fifth in a four-car train dueling for second place.

Casagrande was starting to apply heavy pressure to Shaw for second and he nearly made a pass for second on lap 55. Casagrande came back the very next lap and he made the pass on Shaw to move into second.

Casagrande’s move opened the door for Darling and MacDonald to follow him by Shaw and drop Shaw from second back to fifth.

Polewarczyk cruised to the checkered flag after that to win the Casagrande Builders 75.  Casagrande finished second with Darling, MacDonald, and Griffith rounding out the top five.

More in this category: « As Drought Continues, Schatz’s Frustrations Build Spring Run Invasion Finale Goes To Thorson »
back to top