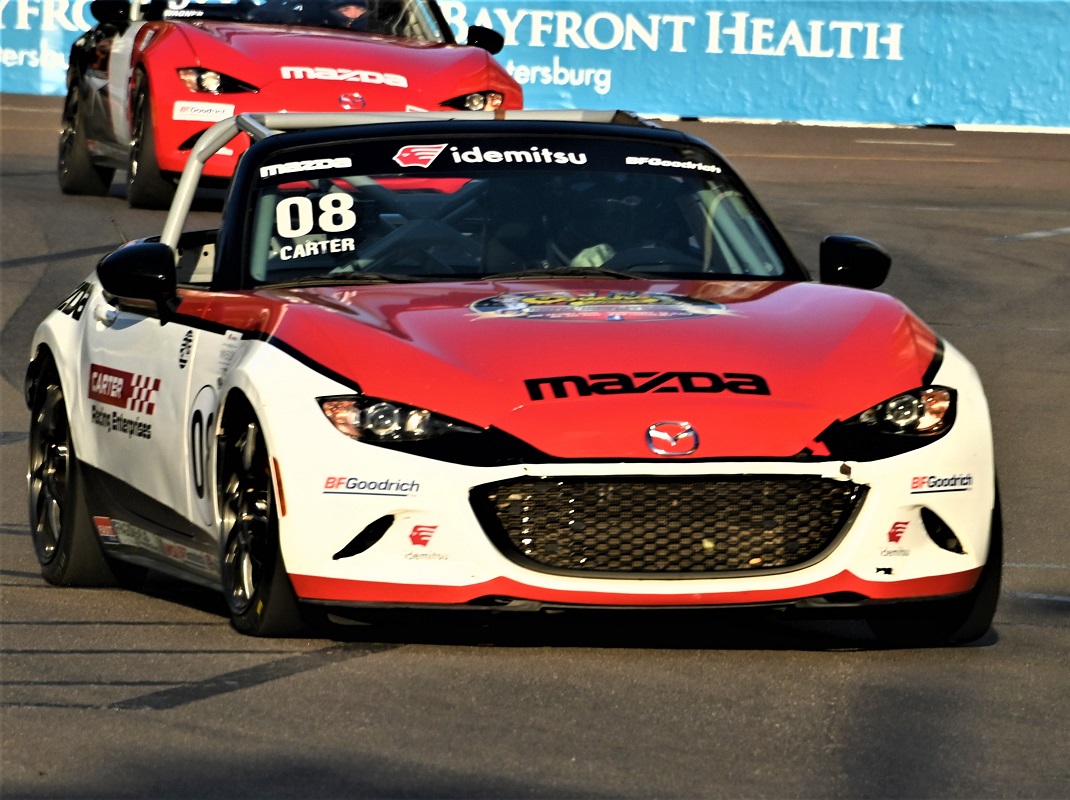 ST. PETERSBURG, Fla. – When an early caution slowed the action on the streets of St. Petersburg, Michael Carter thought that his work to pull away from the Idemitsu Mazda MX-5 Cup presented by BFGoodrich Tires field was all for naught.

But Carter didn’t need to worry; when racing resumed, he still could not be caught.

Carter took the win by over two seconds, a mammoth margin in MX-5 Cup competition, and leaves St. Petersburg with the points lead after six races in the 14-race championship.

Starting from the pole, Carter held off Gresham Wagner through the opening laps. Any mistake by Wagner meant he was pounced on by a train of cars behind him.

This gave Carter the opportunity to build a comfortable gap, until 10 minutes into the race, when the car of Aaron Jeansonne caught fire and brought out the race’s only full-course yellow. Jeansonne was able to pull off and exit the car.

When the track was clear and green flag racing resumed, there was 26 minutes left on the race clock. This created a hectic battle for second through sixth, which enabled Carter to once again pull away.

The fight for the final two podium spots was intense. Eventually, Sam Paley emerged as the breakaway driver to chase down Carter.

While scrapping for third, Wagner and Jared Thomas made contact in turn two. Thomas spun and was lucky to have not been hit by any of the cars packed up behind them.

Wagner continued on, and Thomas dropped down the order. He eventually climbed back to 16th at the finish.

Race one winner Selin Rollan did not get a chance to challenge for the podium. Contact with the wall in turn 10 damaged his car and he parked in pit lane with 10 minutes left.

Up front, Paley ever so slightly chipped away at Carter’s lead, but eventually ran out of time. Carter took the win by 2.210 seconds over Paley.

“That was how you want them to go,” Carter said. “You want to sit on pole, lead every lap, and win the race. We didn’t get that done this morning, but it was great to do that in Race Two. I worked my tail off to get that gap before the yellow and then when the yellow came out, I radioed ‘I just did all that for nothing!’ But fortunately, when we restarted, they got to racing really hard and I was able to do it again.

“The last 10 laps, I was just taking care of everything as much as I could.”

Carter’s two poles, two fast laps, runner-up finish in race one and win in race two have propelled him into the MX-5 Cup championship lead by 120 points over Wagner.

“Congrats to Sam (Paley), he drove his tail off and to Gresham (Wagner) as well after he had that problem in race one,” Carter added. “Also, a big thank you to everyone at Coaches Corner back in Savannah who watches us and supports us, a big thank you to them!”

Paley collected his second podium of his rookie season. His first top-three came in his Mazda MX-5 Cup debut at Daytona (Fla.) Int’l Speedway in January.

“Honestly, that was probably the hardest race of my entire life,” a red-faced Paley said. “I’m not going to lie, I’m out of breath! I really gave it 110 percent the entire time. We were the fastest car on track, but unfortunately the gap was just too big and we just didn’t have enough laps. I had the car and gave it everything I had so I’m satisfied with second, especially after the DNF in race one.

Third was a satisfying finish for Wagner after a drivetrain issue in race one forced him to retire. His relief was tempered with some regret for his contact with Thomas, though race officials deemed it to be a racing incident with no penalties issued.

Rookie drivers had a strong showing on the streets of St. Petersburg; five of them finished in the top 10 in race two. In addition to Paley and Mars, Chris Nunes finished sixth, Juan Hernandez Leiva finished seventh and Daniel Williams finished eighth.

Alex Bachoura earned hard-charger honors for advancing from 18th to 11th in the 45-minute race.