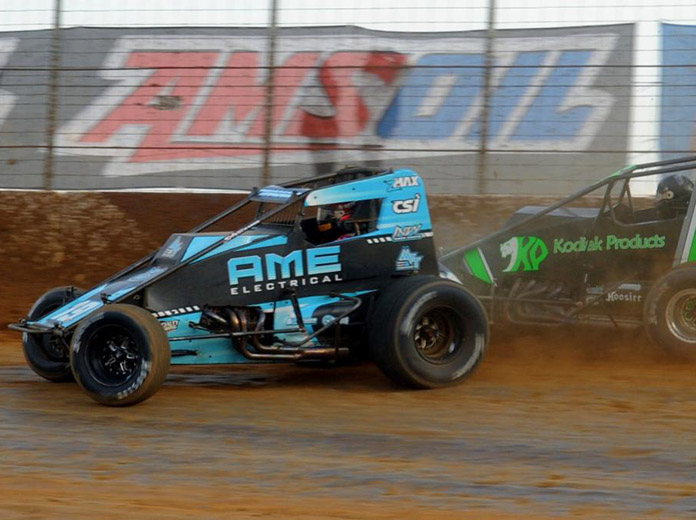 SPRING RUN, Pa. – After earning his first USAC AMSOIL National Sprint Car victory on Friday at Big Diamond Raceway, Thorson established that he’s not willing to settle for just being the top rookie with the series.

His ideals involve winning races and a championship.

As it turned out, Thorson wasn’t even open to settling for a single victory over the weekend. He wanted more.

It took 13 starts for Thorson to become a first-time winner and two more starts for the Minden, Nev., native to become a two-time winner with the series, scoring the victory in Sunday’s Keystone Invasion finale at Path Valley Speedway Park.

Sandwiched between the two winning performances was an 18th place dropout on Saturday at BAPS Motor Speedway, putting Thorson in the position of having to bounce back Sunday in the series’ first event at Path Valley aboard his Reinbold-Underwood Motorsports entry.

“We had to bounce back after last night’s run,” Thorson said. “What can I say?  These guys are working hard to get me comfortable enough to be able to bang the curb, run in the slick and run anywhere.  Our motor package and our cars are really good.  Hats off to crew members (Tyler Ransbottom), Connor (Ridge) and (Austin French). I can’t thank car owner Andy Reinbold enough for giving me the opportunity to run this.”

With it being the first series event held at Path Valley, several drivers came in lacking prior experience at the Spring Run, Pa., quarter-mile. That wasn’t the case for Tanner Thorson.

In three previous USAC NOS Energy Drink National Midget starts there, Thorson led 31 laps, was the fastest qualifier in 2015 and, that same year, led the first 13 laps of the feature. In 2017, Thorson was in position again to win at Path Valley, pacing the field for 18 laps and was leading when contact in turn four coming to the checkered flag sent him spinning out of the lead. An ultimately better result came about for Thorson in 2019 with a fourth-place finish.

Thorson drew comparisons of Path Valley to a larger version of Port City Raceway. After all, it was exactly two weeks earlier that Thorson won a USAC National Midget feature at the eighth-mile Port City track. Small track, bigger track, Thorson has come up big in recent weeks and felt he had the upper hand coming into Path Valley.

“I think anytime you can run somewhere, whether it’s a midget, a sprint car, a wing car, it seems to help,” Thorson explained. “I definitely like this place; it’s definitely my cup of tea.”

Thorson started from the outside of the front row with Saturday’s BAPS winner, C.J. Leary, on the pole, for the 40-lapper. Thorson got the launch, breaking away from the pack initially, while a three-car scramble ensued just behind involving Chase Stockon, Chris Windom and Leary.

Exiting turn two on second lap, Windom attempted to split the gap between Stockon and Leary, but the gap closed soon thereafter with Windom serving as the meat in the sandwich, with Stockon launching over Windom’s left front wheel and Leary ramping over Windom’s right front wheel simultaneously, resulted in Windom’s front end being knocked, Brady Bacon spinning to a stop, and 12th starting Timmy Buckwalter flipping over. He was uninjured.

Windom and Buckwalter were knocked out of the race while Bacon restarted from the tail and drove to a 12th place finish.

When racing resumed, Thorson led the charge around the top with Leary stalking in the shadows until the 19th lap when Leary slid past Thorson from the bottom of turn three to the curb at the exit of turn four. Thorson tried to return the favor in turns one and two, pulling dead even with Leary. Leary then lost his footing atop the turn two cushion, allowing Thorson to scoot past under into three. Leary limboed even lower and cleared Thorson to the top of four.

The race’s outlook turned on a dime when, moments later, Thorson fired another slider on the high-riding Leary into turn one, ultimately resulting in contact between Thorson’s right rear and Leary’s left front. Leary, now on the wrong side of the cushion, throttled out of the proverbial quicksand, but now found himself in third as Justin Grant shot underneath to snag second.

By lap 23, Leary had gathered himself and was engaged in a ferocious battle with Grant when he tripped the turn three cushion. As he bounced like a basketball in the fluff, fourth-running Kevin Thomas Jr. tried to avoid, but ramped his right rear over the left front of Leary, which pre-empted Leary’s evening on the hook.

En route to the 30th lap, Thorson was well in command. However, this was 40, and the 2016 USAC National Midget champ still had traffic to grapple with around the tight confines. Though bottled-up periodically, Thorson executed with relative ease, despite having to cut to the bottom with two laps remaining where traffic was running in the mid to high lanes. Thorson and the lapped car of Briggs Danner glanced rubber at the bottom of the first turn, though it was more of a case of no harm, no foul, when all was said and done for both.

For complete results, advance to the next page.

More in this category: « Swanson Conquers Salem In A Late Model Marks Makes A Statement In Ray Tilley Classic »
back to top