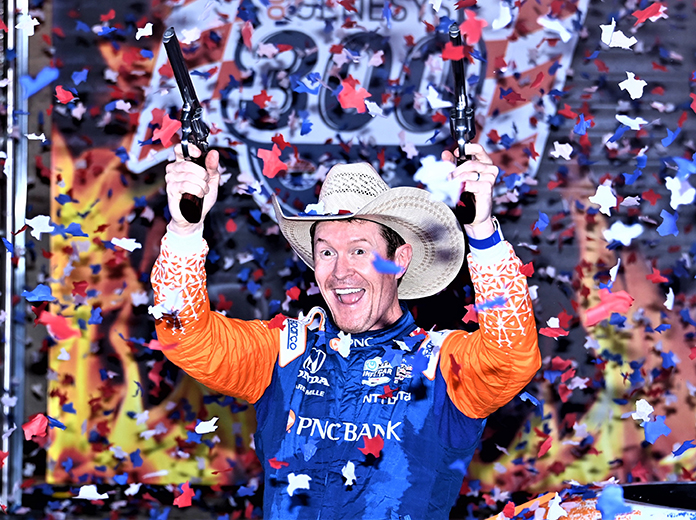 FORT WORTH, Texas – It nearly looked like an instant replay of last year’s Genesys 300 for Chip Ganassi Racing’s Scott Dixon.

For the second year in a row and the third time in the last four seasons, Dixon won the NTT IndyCar Series race at Texas Motor Speedway. Last year, he led 157 laps on his way to victory in a 200-lap race. Saturday night, he led 206 laps in a 212-lap race, finishing .2646 seconds ahead of fellow New Zealander Scott McLaughlin’s No. 3 Team Penske Chevrolet.

It was Dixon’s 51st career IndyCar Series win, just one behind Mario Andretti for second on the all-time victory list. It also breaks a tie with A.J. Foyt for most seasons with at least one win with 19. He also extends his own record of most consecutive seasons with a win with 17.

“It feels amazing to be in this position,” Dixon said. “You never want it to end. It’s never easy, you have to keep working at it.”

McLaughlin finished second in his first race on an oval and just the fourth IndyCar race of his career.

“I’ve never been this bloody happy with second,” McLaughlin said. “I’m really stoked. Everyone at PPG and Chevy, thank you. I just didn’t have enough for Scott (Dixon) at the end. It was bloody cool battling with one of my all-time heroes. Two Kiwis 1 and 2, fantastic.

“I’m just so proud. I’ve worked really hard behind the scenes to make it feel good, and we got some good strategy there from my team. They put me in a position; I’m just happy to bring it home for them.”

It was Dixon’s fifth career win at Texas Motor Speedway. The winner of this race has gone on to win the NTT IndyCar Series championship the past three years.

Mexico’s Pato O’Ward was third in the No. 5 Arrow McLaren SP Chevrolet followed by fourth-place Alex Palou in the No. 10 NTT DATA Honda for Chip Ganassi Racing.

Graham Rahal finished fifth in the No. 15 Honda for Rahal Letterman Lanigan Racing after avoiding a close call with Jack Harvey on the backstretch late in the race.

There were two caution periods. The first caution waved when Sebastien Bourdais crashed in turn two after getting tagged in the rear by Team Penske’s Josef Newgarden on lap 56.

Bourdais criticized Newgarden after he was checked and released from the infield care center.

“Honestly, it’s a really tough break,” Bourdais said. “We were really strong in practice like we came here a few weeks ago. We were really fast this afternoon. The engineers did a great job. The car was really racy and pretty darn good.

“Colton wanted to pit that lap, so did we, and Josef runs into the back of us for no reason and takes us out. It’s such a shame and a missed opportunity. I can’t talk for Josef, but he misjudged it and ran into the back of our car. Colton was checking up really, really bad. We were in third gear, low RPM. At that stage in the stint, we are in fourth gear. He wanted to slow down and stay tight, so I didn’t get inside of him. But it’s like falling off a cliff, not having any front tires anymore and it set off that chain reaction and we were part of it.”

The second caution period came after Felix Rosenqvist’s passed James Hinchcliffe’s Honda entering turn one, sending Hinchcliffe’s car up into the PJ1 solution on the track. Hinchcliffe lost control of the car on the slippery track sealant and backed into the wall.

The move was also a near instant replay of last year when the roles were reversed as Hinchcliffe passed Rosenqvist late in the race, sending Rosenqvist into the wall.

When the race resumed on lap 174, Dixon hit the throttle and drove all the way to victory lane at Texas Motor Speedway.

This was the first race of a doubleheader at Texas Motor Speedway. The XPEL 375 is scheduled to take the green flag at 5:15 p.m. Eastern Time Sunday.

“Tomorrow is going to be different because it will be more of a day race and tire deg may increase, and maybe we’ll see more variance tomorrow because it’s a slightly longer race,” Dixon said. “You have to take them when you can, it gives us a pretty good start spot, but it doesn’t guarantee anything.”

More in this category: « Ricca Masters Rain In Texas Sports Car Fight Two More For Dotson During California IMCA Speedweek »
back to top