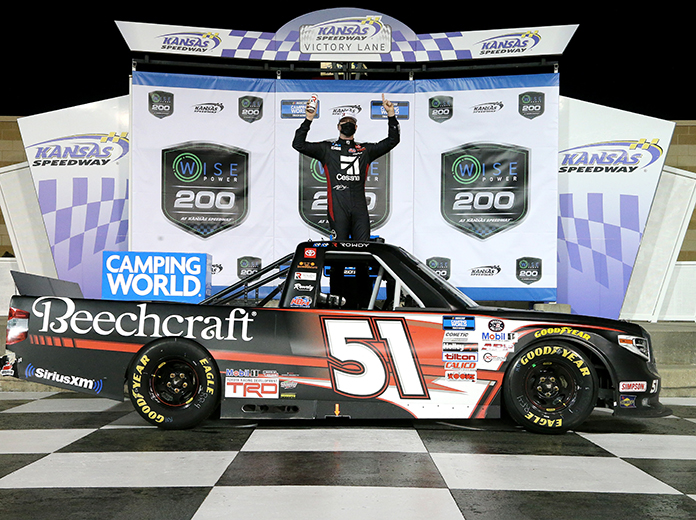 After losing the lead during an overtime restart, Busch roared back to the front during a second overtime restart to earn his 61st Truck Series victory in dramatic fashion Saturday night.

Busch had a comfortable lead when the caution flag waved with seven laps left when Jennifer Jo Cobb’s truck stalled as she was attempting to exit the race track. That set up an overtime restart, with Busch leading Ross Chastain, Ben Rhodes and Zane Smith.

During the restart Busch’s Toyota seemed to bog down and he was swarmed by the competition, with Chastain taking the lead on the bottom as Rhodes rocketed to the top around Busch. Busch had a similar issue earlier in the evening, but this time it appeared the problem would cost him the race.

Just as the field roared out of turn two Stewart Friesen got loose and spun, collecting the Toyota of Derek Kraus to bring out another caution flag. Chastain was now the leader, with Smith second, Rhodes third, Bayley Currey fourth and Busch in fifth.

Rhodes would pit during the caution period for fuel, moving Busch up another position to fourth. Busch would opt for the top on the restart via the choose rule, where he lined up second on the outside behind Smith.

The second overtime restart was much better for Busch, who stormed around the outside just as Austin Hill, who had pitted for fresh tires, came roaring to the front on the bottom of the track.

Chastain was able to maintain the lead on the bottom for a moment, but Hill quickly got alongside him to set up a battle for the lead down the backstretch towards turn three. At the same time, Busch was giving chase in third and went to the top as they raced into the corner.

Busch’s move to the top paid dividends as the trio emerged from turn four three-wide for the race lead. Busch was able to take the lead as they raced under the white flag before pulling clear of Chastain and Hill entering turn one.

Now back in the lead, Busch pulled away from the battling duo of Chastain and Hill to claim a victory that appeared unlikely at best after the first overtime restart.

“No restarts actually went our way tonight,” said Busch after earning Kyle Busch Motorsports’ sixth-straight victory. “I was shocked. We definitely missed something just being able to come up through the gears and get going. It just would not go. It was just slow. Those guys would just swarm us.”

Chastain and Hill stayed side-by-side for the entire final lap, with Chastain barely edging Hill to finish second. Both drivers said they stayed wide open during the final two laps, but neither had enough to stop Busch.

“I thought I did everything right on that restart,” Hill said. “I through it on the apron. I saw Chastain go up to block whoever was coming on his outside, got beside him and from then on it was a drag race. I was wide open the whole green-white-checkered.”

Chastain, making one of a handful of scheduled starts this season for Niece Motorsports, said he was happy to bring home a good finish for the Al Niece-owned team.

“Austin had a huge run to the inside there and then Kyle came up top,” Chastain said. “I didn’t lift the last two laps. It was progress though.”

Christian Eckes earned his best finish of the season in fourth, with John Hunter Nemechek coming home fifth after pitting from second prior to the first overtime restart.

More in this category: « Scott Dixon Corrals Another Victory In Texas Two More For Dotson During California IMCA Speedweek »
back to top