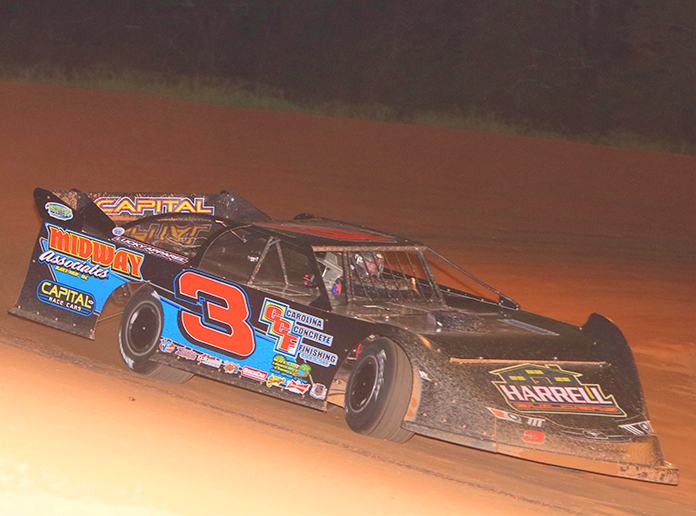 The win was the first of the year for Harrell at Lake View.

Harrell set the mark in qualifying with a fast lap of 16.369 seconds to best Banjo Duke and Christian Thomas.  On the start, Harrell got the advantage over Thomas to take the early lead.  The first caution of the night waved on lap 12 for a spin by Russell Erwin in turn two.

Up front, Thomas and Duke were able to keep pace with Harrell, with Duke taking second on lap 16. Michael Rouse was making a strong run to the front after starting seventh, but spun in turn two after taking third from Thomas on lap 22, ending the night for both contenders.  On the restart, Daniel Tucker was able to get second from Duke, but Tucker’s night would come to an end after a flat tire with three laps to go.

Harrell led the rest of the way to take the win over Duke, Robbie Emory, Michael Marlowe, and Michael Batten.

Cameron Norris IV got the advantage over pole sitter Ron Pope at the start and led flag-to-flag for his second Carolina Outlaw Super Street win of the year. Chris Powers had a wild ride on lap four when his car ran off the back straightaway.

Pope and Benji Thompson were running second and third respectively, but flat tires for both with three laps to go took them out of contention for the win.  Following Norris at the finish were Scott Patterson, Jerry Johnson, Danny Yarborough and Michael Freeman.

Darryl Moran started on the pole and led every lap for his second Crate Racin’ USA Street Stock win this season. The race ran relatively incident free except for spins by Tyler Doyle and Andy Taylor. Coming in behind Moran at the finish were defending track champion, Michael Butler, Mike Manes, Joey Wilkes, and Taylor Geddings.

Jaden Locklear continued his strong start to the season by taking his second straight win in the Stock V-8 division. Ed Mason and Tim Lovett spun on lap one as they battle for third and collected Ryan Doyle. Behind Locklear at the finish were James Smith, Mark Compton, Christopher Phipps, and Anthony Morris.

Jerry Johnson Jr. started from the pole and led every lap for his second SCDRA Sport Compact win of the year.  Rounding out the top five were Derek Kemper, Jason Brown, Kyle Jenks, and Calvin Miller.

More in this category: « Matos Is Magical In Laguna Seca TA2 Slugfest Two More For Dotson During California IMCA Speedweek »
back to top