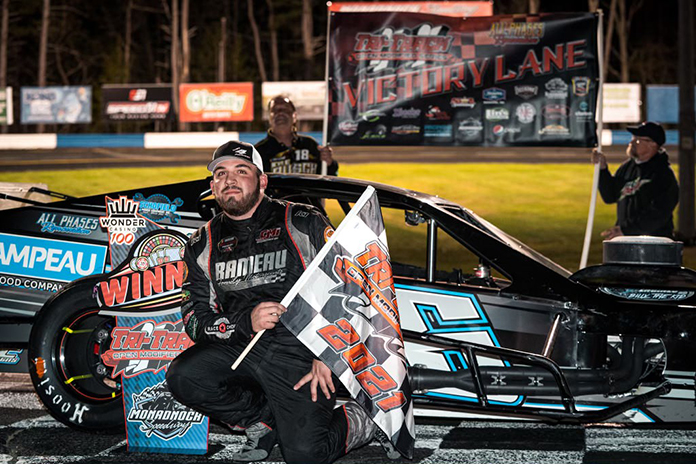 WINCHESTER, N.H. — Sam Rameau had to work for it, but he was not going to be denied during Saturday’s opening race of the season for the Tri Track Open Modified Series at Monadnock Speedway.

In the Wonder Casino 100, Rameau made a late pass on Ron Silk to score the $6,000 winning check — besting more than 30 cars that showed up to the Winchester, N.H., oval. Silk crossed the line second, with defending series champion Matt Hirschman third.

Rameau pitted from the lead, along with the rest of the field, during a caution period just after halfway. He restarted outside the top-15 and his chances of winning at that point appeared slim. But the rising Modified talent worked his way to the front.

“I was just going at my own pace early, and we came in and I’m not going to lie, I was really nervous over the radio,” Rameau said. “With 40 laps to go, I said there was no way we were winning the race. The car just rolled the outside great. We all come here for the same reason. It’s really cool. I just really can’t thank my guys enough. They do a great job.”

More in this category: « Lake View FUEL Event Is All Shaun Harrell Two More For Dotson During California IMCA Speedweek »
back to top