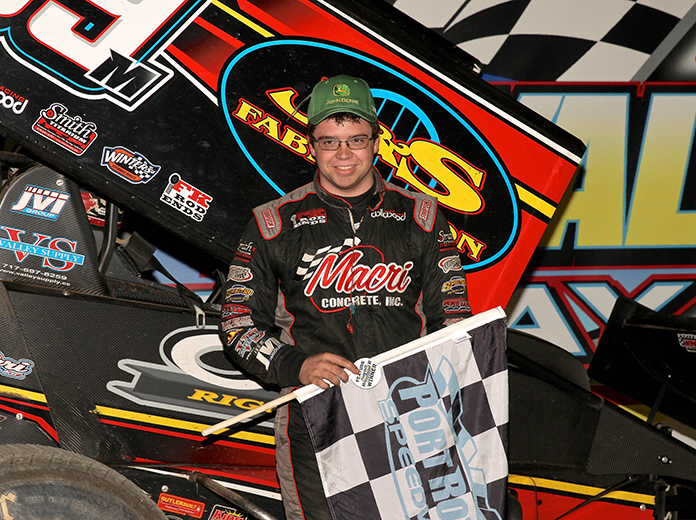 PORT ROYAL, Pa. – Two components have become apparent to Anthony Macri in his rise to superiority at Port Royal Speedway: urgency and boldness.

On Saturday night, Macri enacted both to prevail once again at the Juniata Valley half-mile clay oval, this time a 1.223-second victory over a determined Brent Marks.

It’s the 21-year-old’s second win and fourth podium run over the past five races at Port Royal. Macri now has three wins on the year, all in his previous nine races.

In the latest victory on Saturday, he raced from sixth and to the lead by lap two. An offensive approach took care of the rest.

It was Macri’s eighth career win at Port Royal. All have come over his past 25 races at the facility, dating back to June 14 of last year. Since then, he’s finished on the podium 16 times at Port Royal, performing on all variations of the track’s racing surface.

“I’d say we learned some stuff, setup-wise,” Macri said. “It kind of seems like it’s a different track every week we show up here. Anytime you get a different track, and you can adjust to the track, and be able to win races, it definitely adds to your notebook. And confidence, really.”

This kind of confidence is unmistakable, like when Macri shot between pole-sitter Mike Walter II and Jeff Miller to take the lead off turn two on lap two. His lead swelled to five seconds two laps later, as Marks and Dewease moved to second and third, respectively.

Marks trimmed the margin to three seconds before a red flag for Jeff Miller, whose car flipped wildly in turn two, stacked the field back up on lap 12. Macri blasted into clean air on the ensuing restart and seemed to have ran away with it until Marks made up ground in lapped traffic.

A sizable lead shrunk to just three cars with four laps to go, and with three laps left, Marks generated a run down the frontstretch. That’s when Macri snuffed out Marks’ attempt for a slide job by using a lapped car on the bottom groove as a pick before racing back up to the cushion to continue his momentum.

“I could hear [Marks] back there and I knew I probably wasn’t getting through lapped traffic as efficiently as I should have,” Macri said. “I could see him show his nose on the frontstretch and I knew I needed to thread the needle.

“It definitely wasn’t an easy race,” Macri said. “Definitely didn’t have the best car. We worked on it under the red [flag]. It was good for about two or three laps, then it started to go away again. I’m just lucky and fortunate.”

Marks, meanwhile, started a row in front of the eventual winner but wasn’t stable enough to run the top as well as Macri.

“We were a little too free,” said Marks, in his third race back in his family-owned No. 19 on Saturday after leaving CJB Motorsports. “We couldn’t get as aggressive as Anthony could there on the cushion. He was way up there, against the wall. … The car really came to life there at the end, which that’s always the goal.”

More in this category: « D.J. Foos Rules The Attica Roost Two More For Dotson During California IMCA Speedweek »
back to top