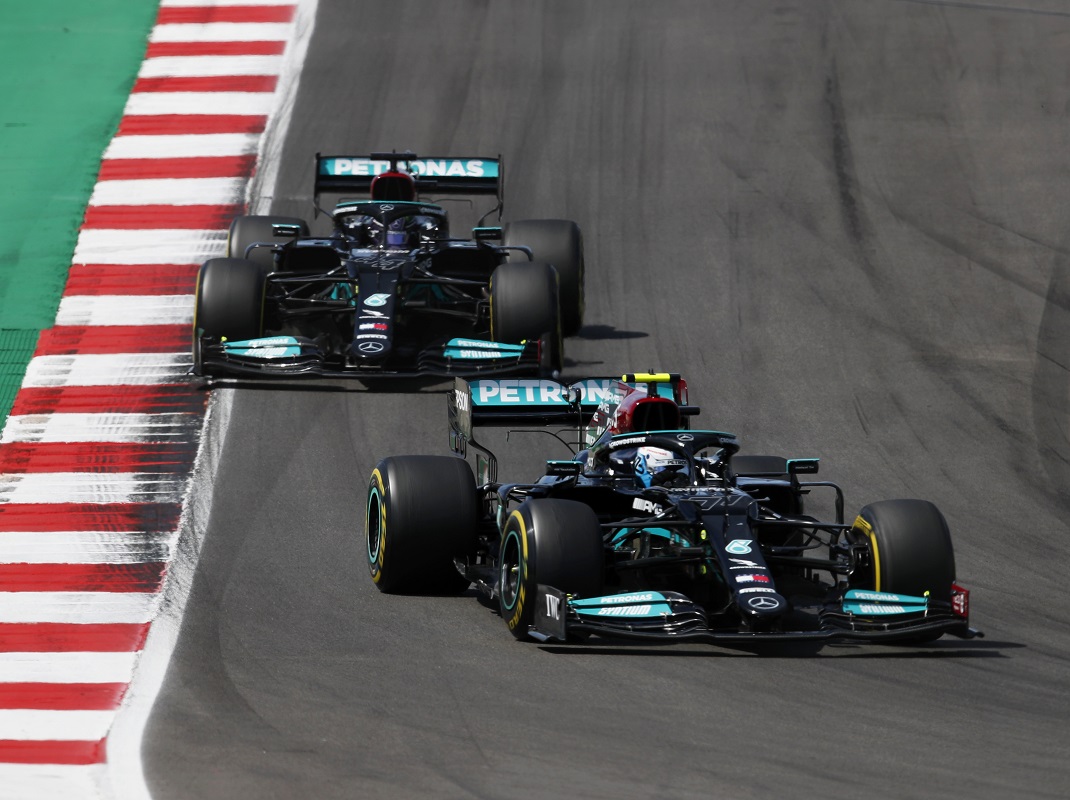 PORTIMAO, Portugal – Lewis Hamilton went on a Sunday cruise to collect his second Formula One victory in three races this season during the Portuguese Grand Prix at Algarve Int’l Circuit.

Hamilton took control of the race with a lap-20 pass of his Mercedes teammate, Valtteri Bottas, at turn one of the 2.891-mile circuit and led most of the proceedings from that point on.

Though Red Bull’s Sergio Perez stayed out longer than anyone in an attempt to catch a yellow flag and turn the tables, Hamilton used fresher Pirelli rubber to chase Perez down and take the lead for good with 16 laps remaining in the 66-lap event.

From there, Hamilton easily drove home to his 97th career F-1 victory. The final margin of victory was 29.148 seconds, after several drivers behind Hamilton pitted for fresh tires in the closing laps.

It’s the fourth time in a row that Hamilton has started second and gone on to win a grand prix.

“That was such a tough race, physically and mentally,” Hamilton admitted. “It was tough keeping everything together and it was very windy out there. It was very easy to put a foot wrong, but we managed and were able to bring this one home.”

Hamilton’s only nervous moment came on the restart following the only safety car period of the race, which came on the second lap after Alfa Romeo’s Kimi Raikkonen ran into the back of his teammate Antonio Giovinazzi and then skidded off the track into the gravel trap at turn one with nose damage.

The lap-seven green flag saw Verstappen get the better of Hamilton at turn one, with the former gaining the runner-up spot for four laps before Hamilton returned the favor on the 11th lap of the race.

“I just didn’t get a very good (initial) start to Valtteri, then lost out on the restart, which was not good,” Hamilton recalled. “I was not happy about that. I just had to position myself the best I could … and I think Max made a mistake at some point through the (10th) lap, where I knew that was going to be my chance to be as close as I could to him in the last sector.”

From there, it took just nine more circuits before Hamilton established command that he wouldn’t relinquish after that point, save for his pit stop on lap 37 for fresh tires.

“With Valtteri, I knew I had to make the move before the tires were destroyed,” Hamilton noted. “I just got him in turn one. But it was a great race.”

Bottas, who was running second to Verstappen before pit stops, lost that place via Red Bull’s undercut strategy that saw Verstappen jump ahead of the second Mercedes on the road after service was complete.

But both Verstappen and Bottas, along with fourth-running Perez, elected to make an extra stop late for fresh rubber in an attempt to acquire the bonus point that came with setting the race’s fastest lap.

At first, it appeared that Verstappen won that battle with a 1:19.849 on the final lap. However, the stewards ruled that Verstappen exceeded track limits at turn 14 and deleted his time, giving the official fastest lap and the extra championship point to Bottas – a bit of solace after Bottas faded from the pole.

None of that was any consequence to Hamilton, however, who took his second straight win in Portugal over Verstappen, Bottas, Perez and McLaren’s Lando Norris.

Ferrari’s Charles Leclerc, the Alpine duo of Esteban Ocon and Fernando Alonso, the second McLaren of Daniel Ricciardo and AlphaTauri’s Pierre Gasly closed the points-scoring positions in the top 10.

The Formula One season resumes on May 9 with the Aramco Grand Prix of Spain at Circuit de Barcelona-Catalunya, where Hamilton has won the last four editions of the Spanish Grand Prix.

More in this category: « PHOTOS: I-70 Welcomes Back The Outlaws Two More For Dotson During California IMCA Speedweek »
back to top